During the early 1950s, some of my earliest memories are of going Christmas shopping in downtown York with my parents. I thought it was a magical place with decorations along the streets as far as the eye could see. It seemed that all the store window displays were decorated to put everybody in a festive mood.

I liked riding the escalator in the Bon-Ton, it was the first store in York to have one. The Bon-Ton was also The Place to go, to have your picture taken with Santa. That is a photo of me with Santa Claus in The Bon-Ton Toyland during 1952.

The years associated with photos of me with Santa are not as easily identified as the 1952 photo. In 1952, the Bon-Ton photo folder contained the following imprints on the cover:

After a little recent research, I was able to pinpoint 1954 as the only year I saw Santa arrive by airplane and climb the fire company’s aerial ladder into the third story window of the Bon-Ton. Our family did see Santa climb the ladder into the Bon-Ton on two other occasions, however the airplane arrival part was only done in 1954. The following ad, describing Santa’s arrival in 1954, is from page 7 of the November 19, 1954, issue of The Gazette and Daily: 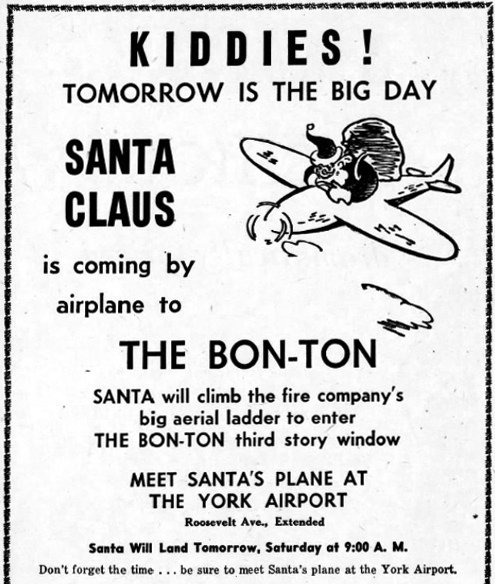 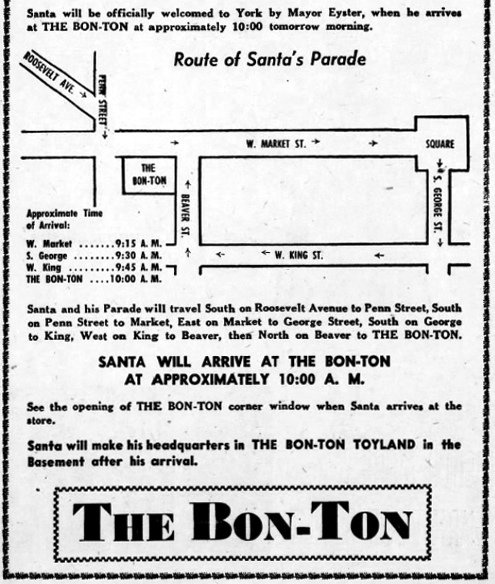 In 1954, it was just Dad taking my brother Stan and I to see Santa’s arrival on a Saturday morning. My memories of that morning are of the York Airport, with it being so close to the place where my Dad, Harold L. Smith, worked, and the enormous size of the fire company’s aerial ladder truck, especially when the ladder was extended.

I realize why I remembered the closeness of the York Airport. In 1954, Santa flew into the York Airport when it was located adjacent to the city limits; i.e. along the west side of Roosevelt Avenue, with the entrance nearly opposite Parkway Boulevard. Several airplanes arrived prior to Santa’s plane and after he arrived, we drove to Goodling Electric’s Main Office, near Smalls Athletic Field, where Dad worked, so he could finish up a few things for Monday. At the time, it seems like we were at Dad’s workplace for several hours. However after seeing that the Santa Parade to the Bon-Ton took only 1-hour, I realize we were there no more than one-half hour.

We drove to a parking lot behind the Goodling Electric Showroom, near the Bon-Ton on West Market Street; arriving well in advance of the appearance of the Santa Parade. We witnessed the festivities upon the arrival of Santa, with the unveiling of the corner window at Market and Beaver Streets. The culmination was Santa making the climb into the third story window of the Bon-Ton.

Posts of other Christmas memories include: