Chapter 16, of my historical novel Railcar Gold, will begin on Thursday.  Each chapter header illustration ties together with the chapter content.  Chapter 16 is entitled Founders, hence the illustration featuring the founders of the railcar building firm Billmeyer & Small.

My goal was to find a nice crisp image of David E. Small from about the same time period as the Charles Billmeyer image.  I search eBay, usually twice a month, for stuff to add to my collections.  Earlier this year I discovered CDVs of “Mr. & Mrs. D. E. Small of York, PA” up for auction and, to my surprise, only one prior bidder with little time left.  I got the photos, even though I was not entirely sure this was the David E. Small of Billmeyer & Small.

The back of each CDV is imprinted “Photographed by Evans & Prince, York, Pa.”  This photo studio was in business in York between 1863 and 1865.  I compared the CDV of D. E. Small with a group photo at the York County Heritage Trust, containing an identified David E. Small; where he appears to be just a little older than in the CDV.

Continue reading for my discovery of the provenance of the David E. Small CDV; it contains a YMCA connection.

What is a CDV photo?

CDV is an acronym for the French darte de visite or simply visiting card.  CDVphotography took over in popularity from ambrotypes, such that Goodridge used for the Charles Billmeyer image.  CDVs provided more durable images than the ambrotypes.  CDVs were suitable to tuck into an album or stick into a letter.

I contacted the eBay seller because I like to understand the provenance of unique items that I purchase.  Bonnie Miller is one of the most helpful sellers that I’ve dealt with on eBay.  Bonnie explained that she purchased an album of CDVs from a seller in Milan, Ohio.  Most of the pages had come loose from the album, so Bonnie broke down the album of 92 CDVs and sold them individually or in pairs.  She could do this because each CDV was identified.  Bonnie also took photos of the pages, prior to breaking the album down; in case any buyer had questions.  The following is the page containing Mr. & Mrs. D. E. Small.  These were the only CDVs in the album with a York, PA photographer. 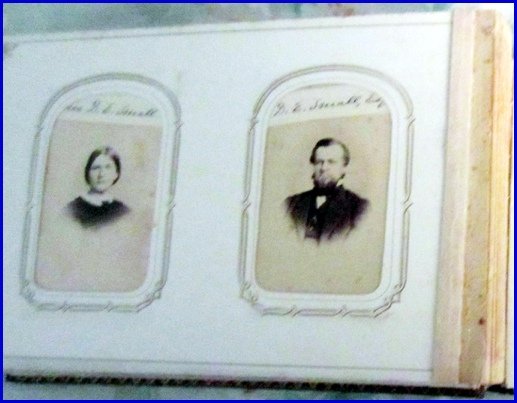 Bonnie Miller researched the people identified and discovered most were 1864 graduates of Union Theological Seminary in Manhattan.  She reasoned the others were probably instructors or benefactors of the seminary; or tied to the YMCA movement, of which Richard Morse and several of his classmates were heavily involved.

Richard C. Morse rose to become the General Secretary of the International Committee of Young Men’s Christian Associations.  Mr. Morse’s autobiography on his Fifty Years in the Young Men’s Christian Association mentions attending the 1865 YMCA Conference; on page 130 he lists D. E. Small of York as a delegate.  A CDV taken between 1863 and 1865 and being handed out at the 1865 YMCA Conference all adds up.

Young Men’s Christian Association—An organization was effected in 1856, but it soon ceased to exist.  The present association was formed March 7, 1869, in the U. B. Church, by young men representing the different Protestant churches of York.  A subsequent meeting was held in “Rupp’s Building” on May 14, of the same year, and a permanent organization was effected as follows:  President, David E. Small; recording secretary, Charles G. Welch; corresponding secretary, Arthur King; treasurer, J. J. Frick.

David E. Small likely handed out the CDV visiting card at the 1865 YMCA Conference where he was gathering ideas on restarting the YMCA organization in York.  Continuing with the 1886 History of York County, PA:

The [YMCA] meetings were held at first in the engine houses of the fire companies and by special request in the parlor of one of the hotels.  Apartments were secured in “Ebert’s Building,” where a reading room was opened and a library established.  At the end of the first year’s work the membership was 198.  The first anniversary was held in Beaver Street Methodist Episcopal Church.

Work was accomplished in Freystown that eventuated in the building of a chapel there at a cost $1,500.  In 1871, rooms were rented in “Spahr’s Building.”  A well supplied free reading room and library were opened.  The first convention was held in May, 1871, in St. Paul’s Lutheran Church.  David E. Small, the president, was an earnest and devoted worker in the cause, and his labors were very effective. …

March 25, 1883, the association lost its most influential member and warmest friend, in the death of David E. Small.

The group photo from the collections of the York County Heritage Trust follows.  David E. Small and several other individuals were identified.  David lost his right arm in an 1853 accident at the York Car Works, when his clothing caught in rapidly revolving machinery. 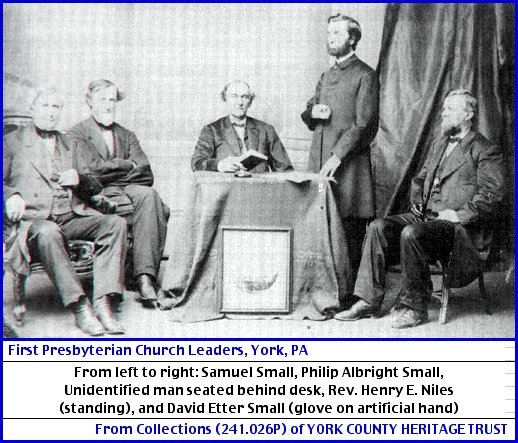 I’ll use the full CDVs within another post in the near future; for now, compare David E. Small’s CDV image within the chapter illustration to an enlargement of David E. Small from the group photo.  I think you’ll agree; these are images of the same individual. 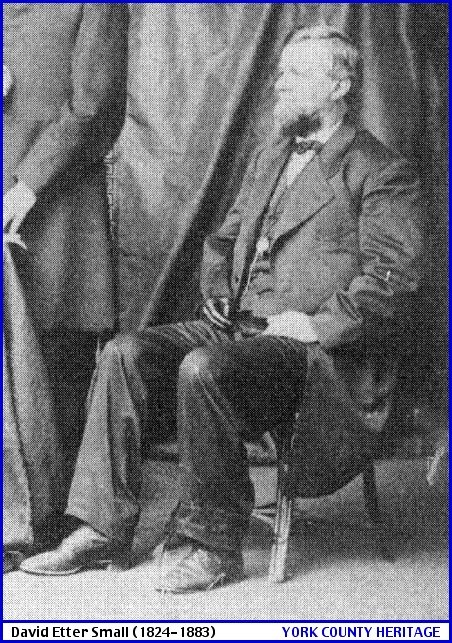