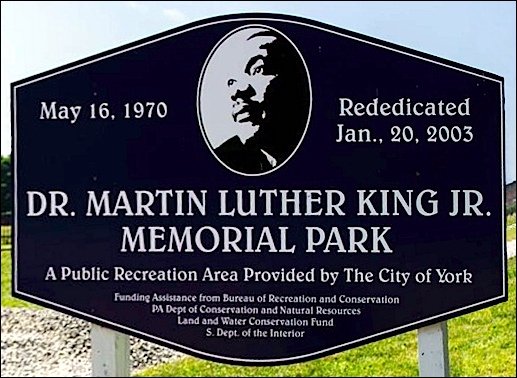 Dr. Martin Luther King Jr. Memorial Park along South Penn Street in York was dedicated on May 16, 1970. That evening Boston Celtic great Bill Russell spoke to a gathering at York High, following an appearance at the dedication.

It was a coup in getting Bill Russell to attend; he rarely made such appearances after retiring as a basketball player in 1969. Russell played 13 seasons for the Boston Celtics, during which the team won 11 NBA championships. In his last three seasons as a player, he was also the coach of the Celtics. He was the first African American coach in any professional sports league, and won two NBA championships as a player-coach during his last two years playing.

Citizens Interested in Tomorrow’s York, (CITY) arranged for the appearance of Bill Russell. That organization was formed by a group of local citizens in response to the previous summer’s civil disturbances. The group worked towards improving communication among people as individuals and as members of the community. The officers of CITY in 1970 were: Co-chairpersons, Mrs. Elizabeth Marshall and Elwood Beckwith; secretary, Mrs. Helga Wells; and treasurer, Frank Myers.

Bill Russell spoke on May 16th at 7:00 PM in the William Penn Senior High School auditorium. He spoke on the subject, “On Human Dignity,” and covered a broad range of topics from his experiences as a professional basketball player to the problems facing youth.

The May 18, 1970 issue of The Gazette and Daily reported on the Saturday May 16, 1970 dedication of Dr. Martin Luther King Jr. Memorial Park:

About 1,700 men, women and children, including city, state and national officials participated in the dedication of Dr. Martin Luther King Jr. Memorial Park along South Penn Street in York. “The guest speaker was Mrs. Elaine Bridgetts Hancock, Washington, D. C., director of the Department of Community Resources, with the Metropolitan Washington Council of Government.”

Besides a host of other speakers and a brief appearance by Bill Russell, the dedication program in the park included “such attractions as the championship King Crusaders, a boys and girls marching group, the Princess Players, Larry Bailey Dancers, Jewel Tone Gospel singers; the White Rose Drum and Bugle Corps and color guard; the York Catholic High dance band; and the Wise Chorus.”

“During the activities, refreshments were sold, children romped and played on the new park equipment, senior citizens met, and old friendships were renewed. The day ended at 5 o’clock so participants could attend the Bill Russell program at York High, and returned later that evening for a teen-age dance.”