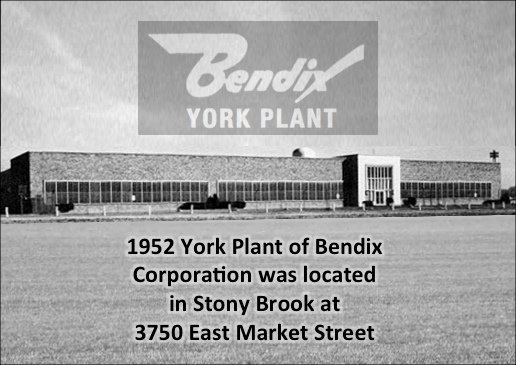 Sam Leitz submitted a site plan of a proposed building slated to succeed Bendix and Fincor at 3750 East Market Street in Springettsbury Township. Sam questioned: “Is this the so called Amazon Hub planned for Stony Brook, which is creating a buzz on Facebook?”

Sam searched the Internet after hearing the Amazon rumor. He did not find anything to back up the rumor, until he discovered a site plan of a proposed building at 3750 East Market Street. The plan was forwarded to me, with some questions; which are answered, after a little site history.

The York Plant of Bendix Corporation, at 3750 East Market Street, had its start as an Engineering department of Bendix Radio in the late 1940’s or early 1950’s. This group moved from a Joppa Road building in Towson, Maryland, to a facility in Pimlico, and then in the fall of 1952, a separate new plant opened in Springettsbury Township, York County, Pennsylvania.

The separate facility was required for at least two reasons; Bendix Radio needed more floor space and the US Government wanted a separate location because of the highly classified work to be done.

The York Plant of Bendix designed and produced TDD’s from CW FM to pulsed modulation. Most were microwave frequency devices. The types of weapons ranged from 81-mm mortars to Re-entry vehicles. Bendix was a major sub contractor for IBM and did state of the art (at that time) core memory systems for IBM in addition to many other components.

A significant downturn in Defense spending caused Bendix to cease operations at the Stony Brook plant in 1971. Fincor moved in as the next manufacturer to utilize this facility; a nice holdover, for many years, was sub contract work that Bendix had done for IBM.

Fincor occupied the former Bendix Plant in Stony Brook during 1972. With the move, Fincor was able to consolidate under one roof, their former main plant and offices at 1000 E. Boundry Avenue in York, along with two smaller plants in York County.

Fincor was a major producer of high-performance electronic adjustable speed motor controls. The following is the evolution of a few of their company logos.

Fincor did a nice business for many years, however suffered a downturn following the acquisition of the company by Emerson Electric Company of St. Louis. The 2003 acquisition by Florida based Saftronics, Inc. lead to operations ceasing within two years and the 104,500 square-foot facility was put up for sale.

The following site plan, submitted by Sam Leitz, shows a proposed warehouse on the site of the 1952 Bendix Building at 3750 East Market Street in Stony Brook, Springettsbury Township.

A search of Springettsbury Township Planning Commission minutes shows this redevelopment of 3750 East Market Street was a briefing item at the November 21, 2019 meeting. The applicant, BL Companies, was seeking to demolish the present building and in its place construct a 246,000 square-foot warehouse.

Kestra Kelly, from BL Companies, stated, “currently there is no end user for the warehouse. She indicated there will be 123 parking spaces with 38 loading docks and 47 trailer spaces. The site is currently in a PADEP Act 2 clean up program from previous industrial users on the site, which includes chemical contamination to be remediated.”

A Google search of BL Companies, an architectural and engineering firm, shows they have pitched plans for Amazon in the past.

A Trolley heads East of Stony Run in Stony Brook

The Humpback Bridge at Stony Brook