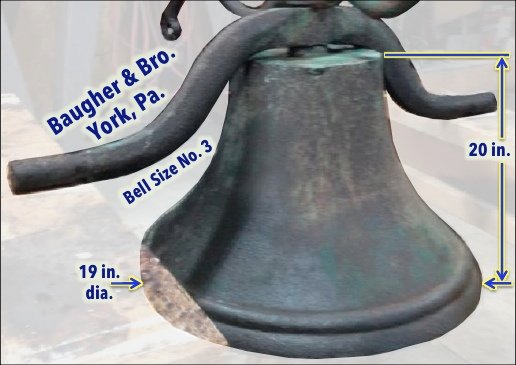 Don Farr submitted a photo of a bell manufactured by Baugher & Bro., of York, PA. The manufacture of bells was a specialized foundry trade and research suggests 150-years-ago Baugher & Bro. might be the first York County foundry to produce bells.

The bell has a mouth diameter of 19-inches and a height of 20-inches; of which a schoolhouse, or a small church, utilization would be appropriate. Newspaper research associated with the Baugher & Bro. bell and an examination of Baugher family history, revealed the tale of the person responsible for the 1869 establishment of the Baugher & Bro. foundry.

The following is the submitted photo of the bell that Don Farr recently acquired. Baugher & Bro. research pinpoints its manufacture as either 1870 or 1871.

In the following photo, the background has been subdued to highlight the bell and the bell attachments. The main attachment is the Yoke, which allows the bearing points, at the Yoke ends, to be just slightly higher than the center of gravity of the bell; which allows easier pulling on the rope, to ring the bell.

Attached, above the Yoke is the Crank. At the one end of the Crank, pulling a rope attached to the Pull Rope connection, starts the ringing of the bell in the one direction. The bell is assisted ringing in the opposite direction via the Counterweight.

The Baugher family businesses along the west side of the Codorus Creek in York originated as a 1832 Tannery established by Frederick Baugher; and initially progressed under control of his sons and sons-in-law.

Three top views of the lettering cast into the top of the bell are provided. They show the lettering: “BAUGHER & BRO YORK PA” around outside and a No. “3” inside.

Frederick Baugher established the Codorus Tannery along the Codorus Creek in York, PA during 1832. When his son George F. Baugher took over the tannery, he also began operating a Machine Shop. Newspaper research associated with the Baugher & Bro. bell and an examination of Baugher family history, points to the other son of Frederick Baugher, foundry man Jacob U. Baugher, as the person responsible for ultimately originating the foundry part of the business as Baugher & Bro., late in 1869.

In November of 1869, Slaymaker & Durkee, operators of the Old York Foundry on the corner of Newberry and King Streets, dissolved their firm by mutual consent. The Works of A. B. Farquhar acquired the pattern equipment of Slaymaker & Durkee’s best selling farm equipment. George F. Baugher acquired other items from the Slaymaker & Durkee going-out-of-business sale; most notably the foundry and most machine shop equipment, which were moved to the Baugher commercial lot, adjacent to the west side of the Codorus Creek and north of Market Street.

Jacob U. Baugher had been a foundry man at Slaymaker & Durkee. The new foundry on the Baugher lot, was operated by the brothers George Baugher and Jacob Baugher; as Baugher & Bro.; however Jacob was primarily in charge of the foundry, since George continues to mainly focus on the Tannery part of the business. The manufacture of bells was a specialized foundry trade. Bell production, by Baugher & Bro., was likely an attempt to get their business into a new, more exclusive, product line.

Unfortunately the untimely death of Jacob Baugher on February 21, 1872 resulted in the very short span for the Baugher & Bro. business; 1869 to 1872. Immediately following Jacob’s death, Baugher brother-in-law William H. Kurtz became a member of the firm, with a name change to Baugher and Kurtz. Later that year, i.e. 1872, Alexander J. Frey also became a partner, and the business went by Baugher, Frey & Kurtz.

In 1881, the foundry operations of the business were moved to expanded quarters; a block north, along the west side of the Codorus Creek, so that they straddled Philadelphia Street. Then in 1886, W. F. Bay Stewart became a partner; and the business was known as Baugher, Kurtz and Stewart. The tannery part of the business ceased operation in the early-1890s; while the Foundry and Machine Shop continued to operate until a massive fire in 1971.

The evolution of the Tannery, Machine Shop, and Foundry operations originated by the Baugher family in the 1800s, on the west side of the Codorus Creek, are illustrated on the following sections of the 1887 and 1908 Sanborn Fire Insurance Maps of York, PA.

Links to selected other posts related to Baugher Foundry:

Baugher, Kurtz & Steward the 14th largest business in York in 1899