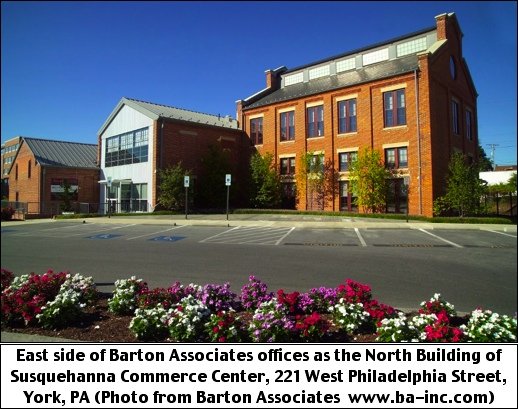 Barton Associates utilizes the end view of the impressive 3-story Gas Works building as their logo. That structure, at the right side of this photo, was constructed during World War I. It was built during the last major expansion of York’s gas manufacturing plant; occurring over a decade prior to the local arrival of natural gas.

The 1885 brick building, at the left side of this photo, was featured in a previous post about Barton Associates celebrating their 50th Anniversary this year; having been established in 1968 as Consulting Engineers. “We Make Buildings Work” is the slogan of this firm involved in: Mechanical Design, Electrical Design, Plumbing Design, Fire Protection Design, Energy Analysis, and Commissioning of those building systems.

The photo is a view of the east side of the York Gas Works buildings, which now houses Barton Associates offices as the North Building of Susquehanna Commerce Center, 221 West Philadelphia Street, York, PA. In 2000, Barton Associates purchased the abandoned Gas Works site and spent $2 million rehabilitating buildings, on the site, constructed from the late 19th to early 20th century. They received a Preservation Pennsylvania award, in 2003, for transforming the former York Gas Works into their offices.

Starting in 1885, the York Gas Works, at this site, produced manufactured gas; which is not to be confused with natural gas; the primary fuel gas in use today. The 1885 “modern” plant produced gas from coal, oil and water; using a process patented in 1873, by Professor Thaddeus Lowe of Norristown, Pennsylvania. His technological advancement enriched a form of coal gas, to produce what was known as water gas; which burned with a blue flame. The improved Lowe Process manufactured gaseous fuel raised the thermal content of the gas up to 350 Btu per cubic foot, and was the dominant process used to manufacture gas across the nation when America entered World War I.

The Gas Industry trade publication of June 1923 contained articles highlighting examples of all the gas plant expansions, across the country, occurring during World War I. In that issue, York got a shout-out with one line: “The York Gas Works completed a new three story Gas Purifying House not long after the Armistice;” i.e. circa 1918.

I use the following 1924 Sanborn Fire Insurance Map segment to illustrate the buildings of the York Gas Works near that time. On the map, I show the viewpoint of the photo, at the beginning of this post. The “Purifying House” in the north end of the complex of buildings is the only 3-story structure; as indicated by “3” in the upper right corner of the building outline. 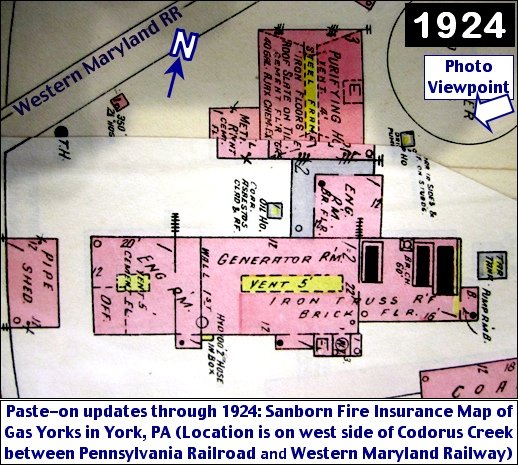 This Sanborn map, in the collections of the York County History Center, contains paste-on updates. Following the publication of the 1908 Sanborn Map, rather than produce new map books every few years, Sanborn supplied paste-on updates. The precise alignment of paste-on sheets depended on how careful the updater applied the, often, irregular-shaped updates. A paste-on was made available, for application, only if a significant change occurred since the previous update. 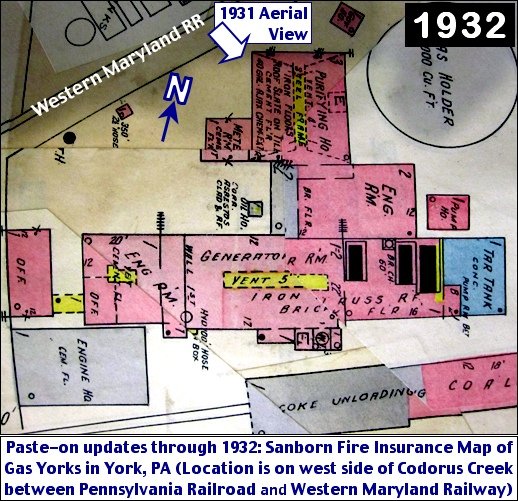 Recall from the previous post about the York Gas Works, the October 29, 1885, issue of The York Daily contained an excellent article explaining the process the plant used to manufacture gas. Quoting the sentences related to the purifying process: “From here the gas passes to the other end of the building to a large room occupied by four purifying boxes, which are fitted with lime and other purifying materials. From this it passes back to the meter where the quantity is measured and thence to the holder for storage.”

I’ve indicated a 1931 aerial photo viewpoint on the 1932 Sanborn Map. That aerial view is a southeast view of the York Gas Works on September 25, 1931. It is from the referenced J. Victor Dallin Aerial Photo in the collections of Hagley Museum & Library in Wilmington, Delaware. Selected features on the aerial photo are annotated, including the circa 1918 3-story Gas Works Building. 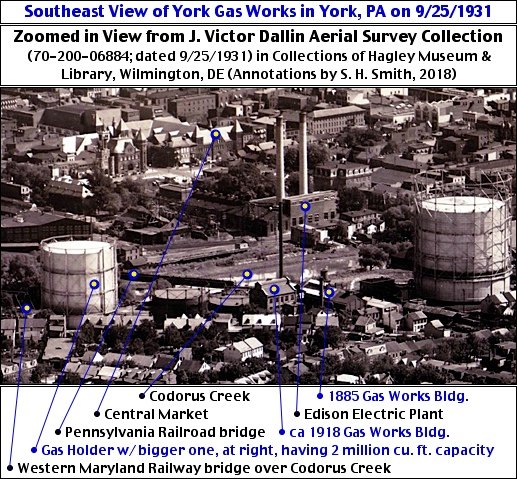 In 1930, the Manufacturers’ Light and Heat Company of Pittsburgh extended their natural gas lines to the York area. Natural gas burned much cleaner than manufactured gas and raised the thermal content of the gas up to 1,050 Btu per cubic foot. For a number of years, both natural gas and manufactured gas was used locally. The Gas Works buildings eventually were relegated to function as Gas Company maintenance buildings, after sufficient pipelines were built across the country to carry natural gas to local customers.