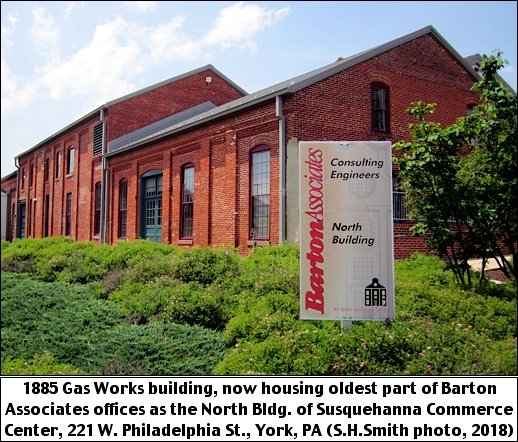 Barton Associates celebrates their 50th Anniversary this year, having been established in 1968 as Consulting Engineers. “We Make Buildings Work” is the slogan of this firm involved in: Mechanical Design, Electrical Design, Plumbing Design, Fire Protection Design, Energy Analysis, and Commissioning of those building systems.

In 2000, Barton Associates purchased the abandoned Gas Works site and spent $2 million rehabilitating buildings, on the site, constructed from the late 19th to early 20th century. They received a Preservation Pennsylvania award, in 2003, for transforming the former York Gas Works into their offices.

In York Gas Works expansion during World War I, I’ll look at other buildings in the Barton Associates complex. This post explores the history of the first building, completed by the York Gas Company, on this site in 1885.

The York Gas Company was organized in 1849 to manufacture and distribute gas. The firm gave its name to a York street, since its first Gas Works were on the south side of an alley; that came to be called Gas Alley. That alley is now Gas Avenue; located one-half block north of Philadelphia Street.

The first York Gas Works extended from approximately 30 to 44 East Gas Avenue; on a site that is now a parking lot. The Gas Company was contracted to furnish gas to the Borough of York for street lighting. Commercial and residential customers only utilized their manufactured gas for lighting purposes.

In the 1870s and 1880s, communities with adequate supplies of gas increasingly sold their excess gas to customers with parlor heaters and gas ranges. The York Gas Company decided to build a bigger, modern gas works, in order to have adequate supplies to allow it to sell gas for purposes other than solely lighting.

The following 1887 Sanborn Fire Insurance Map shows the layout of the “modern” 1885 Gas Works in York, PA. Their location is on the west side of the Codorus Creek at 211 Grant Street; and just north of the Northern Central Railway tracks. On the map, I’ve indicated the photo viewpoint of the Barton Associates building photo, at the beginning of this post. 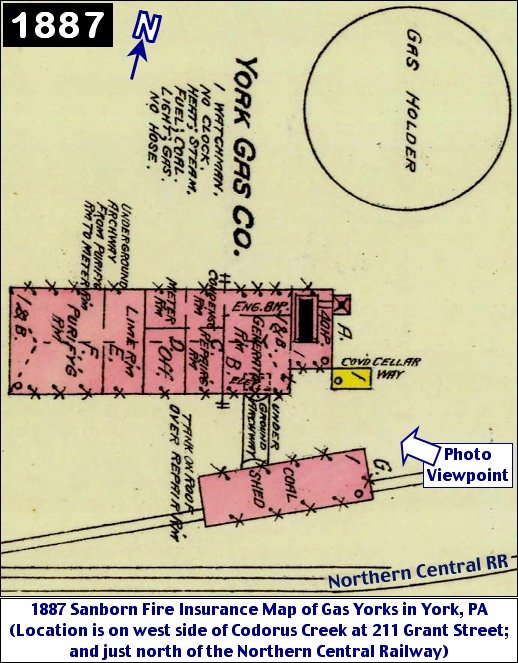 When the ground was broken, in the spring of 1885, for the new Gas Works in York, Pa, it was emphasized this new plant would be fireproof and require 300,000 bricks to construct.

The October 29, 1885, issue of The York Daily contained an excellent piece about “The New Gas Works” on page 1. The article contains a detailed description of the plant and explains the new process the plant used to manufacture gas. Quoting the entire article:

“The new gas works of the York Gas Company, situated between Grant Street and the Codorus Creek, along the Shortline Railroad, for which ground was broken last spring, are now completed and, will in a few days, be in readiness to manufacture gas for the town.”

“The works are composed of the main building, oil house, coal house and a small building containing the governor for regulating the supply of gas. These buildings are made of brick and stone and are constructed in the best manner and of the best material, by York workmen, under the supervision of our townsman, Mr. Francis Bucher, mason. They are also protected from any floods or rush of water by the railroad embankment on the south. A siding runs into the grounds on which the coal and oil is brought in cars.”

“One of the reporters paid a visit to the works yesterday and was courteously received by Mr. F. H. Shelton, of Philadelphia, under whose supervision the works were erected. The main building was first entered. This building is 41 feet wide and 110 feet long, and is about three stories high. The boiler stack is 62 feet high and is built of brick.”

“At one end of the building is a room 25 feet wide and 29 feet long, which contains the generating apparatus proper. In the cellar of this room are the generators, which are simply two large upright shells of boiler iron. These are fitted with shaking grates, automatic bottoms and all appliances for convenience. In these shells the gas is first made. A deep bed of anthracite coal is made in these generators and the gas is formed by passing a jet of steam through the burning coals, and is so decomposed into original gas and leaves the generators at the top and enters the superheaters or fixing chambers. At the base of these it meets the oil which gives it the illuminating power.”

“These superheaters are filled with red hot fire brick, which simply serve to make the oil and steam gas into one fixed illuminating gas. It is now in the crude state and requires to be first scrubbed through a large upright shell filled with perforated iron plates. The gas is then condensed by passing through two shells filled with water from similar upright tubular boilers. From here the gas passes to the other end of the building to a large room occupied by four purifying boxes, which are fitted with lime and other purifying materials. From this it passes back to the meter where the quantity is measured and thence to the holder for storage.”

“Attached to the main room is the engine room wherein is a large engine which runs at the rapid rate of 450 revolutions a minute. Two pumps for pumping oil and a fan or blower for fanning the fires are also in the room. At the extreme end of the building is the boiler house, containing a boiler of 60 horse power, built by Mr. A. B. Farquhar, of York, and various pumps for supplying the building with water.”

“In other parts of the building are various rooms, such as the tool shop and meter room, which are fitted up with all conveniences. The latter room contains a very fine meter, made by the American Meter Company, of Philadelphia and New York. It weights several tons and will register up to hundreds of millions of feet. Adjoining this is the office of the efficient and energetic superintendent, Mr. J. L. Kuehn. The lime room, storage and tank rooms are also contained in this building.”

“On the grounds outside, the most noticeable thing is the new holder. This is 80 feet in diameter, 20 feet high, and will hold one hundred thousand cubic feet of gas, and which the apparatus in the building can fill twice a day. The holder was erected by Messrs. Deily & Fowler, of Philadelphia, and was put up by them in the short space of four weeks.”

“The coal house contains bins which are filled with coal from the [rail]cars. The coal bins, and the cellar of the main building, are connected by a tunnel; through which the coal is wheeled as needed. On the hill is a small house containing the governor which regulates the supply of gas to the town.”

“The gas is what is known as water gas. Its chief points of superiority over the old style coal gas, are the great cleanliness of making it, the saving in labor, the great rapidity with which it can be made, and under certain conditions much cheaper than the old gas, and particularly its capability in sending out rich or poor gas according to the amount of materials used.”

“The generating apparatus was erected by A. O. Granger & Company, of Philadelphia. The oil tank was made by Messrs. Frey, Motter & Company, and is enclosed in a brick building, thus protecting it in every manner. The oil, which is simply commercial naphtha, is taken from the oil tank on the car and, by simple gravity, into its tank.”

“The buildings are entirely fireproof; and even the floors are made of hard hollowed brick and laid in cement. The works in every particular appear to be of first-class design and workmanship throughout. They were erected under the supervision of Mr. F. H. Shelton, of Philadelphia, and are so arranged that a workman could almost sit in an arm chair and run the apparatus. The oil pipe to turn on the steam and oil, and the blast and even the engine and pumps, which are in another room are all operated from one spot.”

“Mr. D. J. Collins, of Philadelphia, is now engaged in making the tests preparatory to handing over the works to the gas company. The old works will be shut down in about a week and the new works will be put in operation.”

The following 1908 Sanborn Fire Insurance Map shows a few minor changes and additions have been made to the 1885 Gas Works after operating 23-years at the new site. Most of the major additions to this gas plant were initiated during and immediately after World War I. 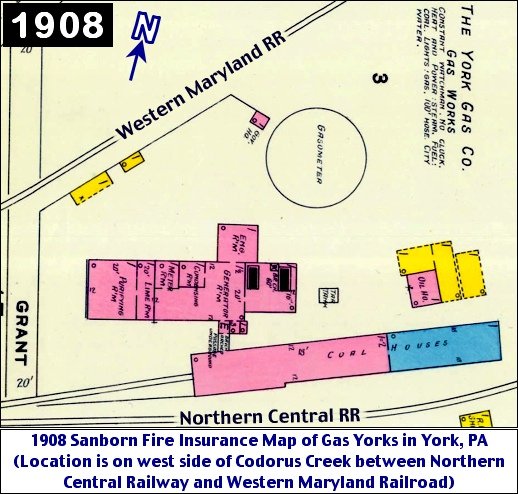 Both of the Sanborn Maps indicate an underground archway existed between the Generator Room and the Coal Shed. I wonder if remnants of that archway still exist? If so, is the archway brickwork as impressive as the exterior brickwork?

The following photo shows the upper northwest corner’s 1885 brickwork in the original Gas Works building has been preserved to this day. 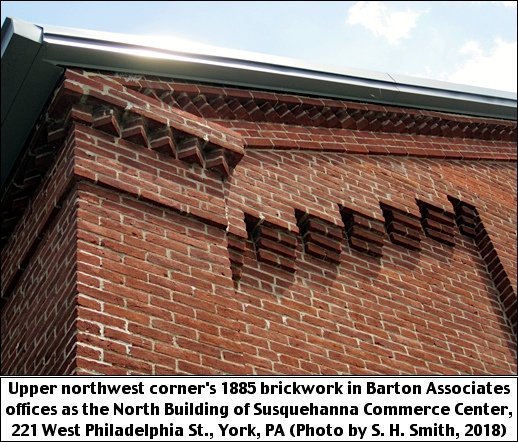