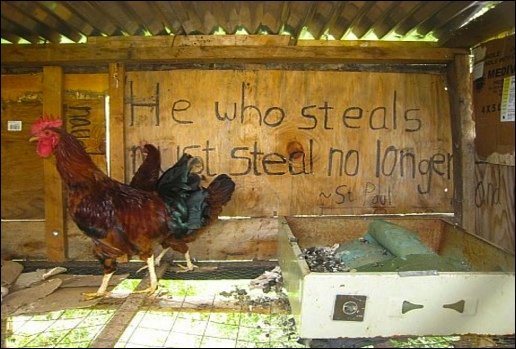 I was surprised at the identity of the thieves who stole chickens, throughout eight townships, during a six-month crime spree in York County; during WWI. Among their victims was my grandfather Emanuel G. Barshinger; everybody called him Manny.

I initially heard the story of the chicken theft a little over 20-years ago, when I took my Mother to see her oldest sister Virgie in the hospital. As they reminisced, Mom asking Virgie about the “Thou shall not steal” sign that was on the door of the chicken coop for a while. As a youngster, Mom had heard a number of differing stories, from her brothers and sisters, about that sign; now she asked Virgie to spill the real story.

Mom thought the chicken theft tale was rather dull compared to all the other fabricated stories about that sign. After Manny’s chickens were stolen, he put up that sign to appeal to the good conscious of any other perpetrators.

Virgie remembered the theft happened at the time when our soldiers were involved in WWI; which was when Virgie was six-years-old and four years before Mom was born. Virgie recalled Manny as being on edge for months, about the safety of his chickens; because he was continually hearing about other chicken coops in the county being robbed.

Twenty years ago I found it difficult to uncover more details about those thefts. Recently in going through my Barshinger family to-do list, I saw the notes of my initial research. I thought, with the advent of indexed newspapers, i.e. Newspapers.com, I’d give it another try and quickly found success.

There was a long-term chicken theft crime spree in York County, spanning 1917-1918; it was the work of two individuals. The outcome was summed up in a front-page article in the January 16, 1918 issue of The York Daily. That crime spree included York Township; where Manny’s farm was located. The article headlines were: “BROTHERS RAID CHICKEN COOPS,” “Clair Kohr, school teacher, and Elton Kohr, student, confess to thefts,” “COMMITTED TO JAIL.”

Quoting from that article in The York Daily of January 16, 1918:

“The wholesale robbery of chicken houses in various sections of the county during the past six months, was cleared up late yesterday afternoon with the arrest by the police of two brothers, Clair Kohr, 19 years old, and Elton Kohr, 16 years old, both of Manchester township, as they were attempting to dispose of some of the chickens at the poultry house of D. E. Bentzel & Son, 239 West Philadelphia street.”

“The brothers confessed to having stolen 150 chickens from farm houses in eight different townships. Clair Kohr, the older brother, is the teacher of a school at York Haven, while the other brother, Elton Kohr, is a student at the York Collegiate Institute. They were committed to jail to await a hearing before Alderman Walter F. Owen on a charge of larceny preferred by Lloyd Goodling, Windsor Township.”

The Kohrs appeared at Emory Kinneman, poultry dealer, 123 West Philadelphia Street, and wanted to sell him chickens. Kinneman suspected something was not right, telling them he did not need any more chickens and suggested they try Bentzel’s poultry house. After the Kohrs left, Kinneman notified the police that suspected chicken thieves might be on their way to Bentzel’s poultry house.

“The Kohr brothers admitted having stolen about 150 chickens in the past six months. It was their custom to hire a team in the city and then drive into the country, where they would approach a farmhouse and rap upon the door. If no one responded, it was regarded as an indication that no one was at home, and they felt safe in plundering the poultry house.”

After spending a week in jail, Clair and Elton Kohr were released to await trial, on payment of $900 bail by their father; as noted from an article in the January 23, 1918 issue of The York Daily:

“Clair and Elton Kohr, sons of Daniel E. Kohr, Manchester Township, who were arrested several days ago on charges resulting from the raiding of henhouses in several townships, appeared yesterday afternoon before Alderman Walter F. Owen and waived a hearing through their attorney, K. W. Altland. They were held under $900 bail to await trial at the April term of court. Bail was furnished by their father.”

I could not find anything about the Kohrs ever going to trial; thus it is likely a settlement out of court was made with all the plaintiffs. I wanted to confirm Archie Kohr as the older brother to Clair and Elton Kohr, and did so via the original 1910 United States Census record, on Ancestry.com, as reported by Daniel E. Kohr for his family of Manchester Township:

The reason I wanted to confirm Archie is the older brother of Clair and Elton, is in referencing the history of Kohr’s Frozen Custard. Their web site notes that business was begun in 1919 by three Kohr brothers: Archie (age 26), Clair (age 21) and Elton (age 17). After the events of 1918, I wonder if Daniel Kohr suggested to his son Archie, to start a business with his younger brothers to keep them out of trouble.