In the early morning darkness of Saturday September 16th, 1876, three monster trains, containing 120 railroad cars, pulled into York, Pennsylvania.  They occupied one of the double tracked rails of the Northern Central Railroad, stretching all the way from West Princess Street and continuing a great distance into Spring Garden Township along Kings Mill Road.

Sunrise witnessed giant tents making their way to Penn Common.  By the time the street parade was underway at 9:00 O’clock in the morning, all the tents were erected.  Crowds filled the 1:00 O’clock and 7:00 O’clock performances.  The festivities were topped off with a magnificent fireworks display, and then the tents came down, the railroad cars were loaded and after midnight the trains left for the circus to repeat their daily routine on Sunday in Richmond, Virginia.

P. T. Barnum made his only prior circus appearance in York during 1872, although some of his individual attractions were exhibited in town as early as the 1840s.  The 1872 circus was small compared to the centennial edition.  For the Centennial year, Barnum decided to organize an over-the-top colossal show.  He purchased four circus troupes to add to his own circus troupe.  All these entertainers required Barnum to create a giant entertainment venue; the birth of the three-ring circus.

P. T. Barnum normally did not travel with his circus during their complete runs, however for the run of the Centennial Edition of the Greatest Show on Earth he traveled with the show everywhere it went.  P. T. Barnum’s circus would later visit York, PA, in 1878, 1882, 1884 and 1887.  Phineas Taylor Barnum died April 7, 1891; his circus continued as Barnum & Bailey’s Greatest Show on Earth.  The Circus Troupe of James A. Bailey was one of those that P. T. Barnum had purchased for the Centennial Edition of his circus.

This research will find its way into my current Chapter 14 of Railcar Gold; entitled Centennial.  Continue reading to see how P. T. Barnum advertised his Saturday September 16th, 1876, appearance in York, Pennsylvania.

P. T. Barnum ad from the back page of the Friday September 8th, 1876 issue of The Evening Dispatch (from newspaper microfilms of the York County Heritage Trust): 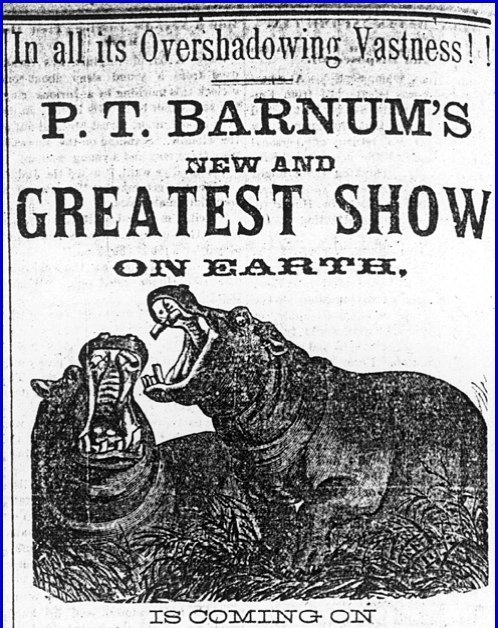 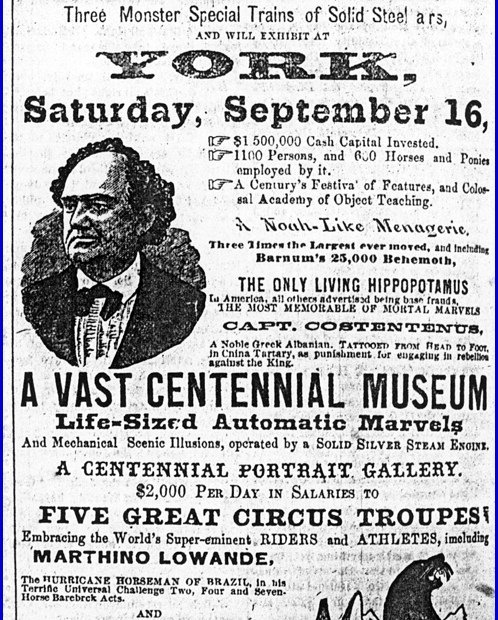 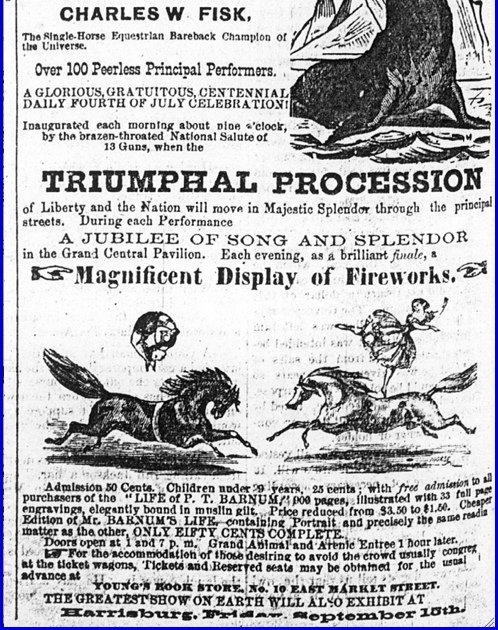