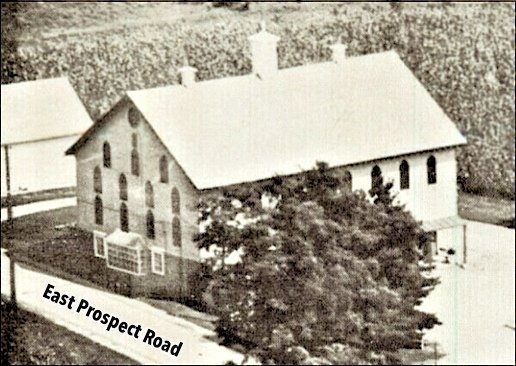 Lottie Hull submitted her story of growing up on a farm in Windsor Township during the 1950s and early 1960s. The weekly highlight was going along with her mother on shopping trips to the Country Folk Shop, located in a Locust Grove area barn; then continued along East Prospect Road to Seitz’s Food Market in Longstown.

Lottie wanted to know if the barn, which housed the Country Folk Shop, and Seitz’s store still stood; and if they did, asked if I could send photos. Lottie submitted the Country Folk Shop postcard, and noted the owners Bob and Marcella Sallade continued sending Christmas Cards even after Lottie’s family moved to Columbia, Missouri during the summer of 1963.

Several weeks ago I e-mailed the photos, while asking Lottie for a few comments; to include in a post containing the postcard. Lottie Hull exceeded my expectations; she provided a short story about growing up on a farm in Windsor Township during the 1950s and early 1960s. Quoting her full response:

“My earliest memories are playing with a neighbor girl almost daily. She was one year younger and thankfully was spared from my one room school experience. I started school at Fairview one-room schoolhouse. During the coldest months, I was sick at least half the time, as were most of my classmates. It seemed the wind went right through the wood siding and the stove put out the heat. Depending where the students were in the room, they were either sweating or shivering.”

“Going into second grade, the modern Locust Grove Elementary School opened. That school was comfy, and even had indoor toilets. I remember everybody made a big deal about the electric heat in the building. One year I had perfect attendance.”

Continuing the comments by Lottie Hull: “Mom would always buy something at the Country Folk Shop, sometimes paying with some of our extra produce or honey from our farm. I think mom liked to visit with Marcella Sallade just as much. I liked looking at all the nice things in the shop. At various times during the year, fresh produce and preserves were sold on the upper floor of the barn and at the lower shop entrance. We always checked how much they were selling our honey for, because that was the first question Dad asked when we got home. I was always the one to announce the price.”

Concluding Lottie’s comments: “Our family got nearly everything else we needed during our weekly trip to Seitz’s, a country grocery store in Longstown. If we could not get it there, we would usually go to a Red Lion store. However the big time highlight was the once a year, near Christmas time, trip into downtown York, to window shop and see Santa at the Bon Ton.”

The former Seitz Food Market, operated at the southeast corner of East Prospect Road and Cape Horn Road, in Longstown, from the late 1940s into the 1970s. This building was razed in 2017; in the roadwork to further widen that intersection. However Google Street View often contains images from prior years; the following is from 2008.

An historic aerial photo, taken October 20, 1947, shows Seitz Food Market and the neighboring Seitz Apartment buildings under construction. Sam Seitz opened the combination grocery, butcher, hardware store in 1948. He closed the store in the 1970s, however for at least another twenty years continued to be the landlord for the apartments and those sections of the buildings rented out to businesses.