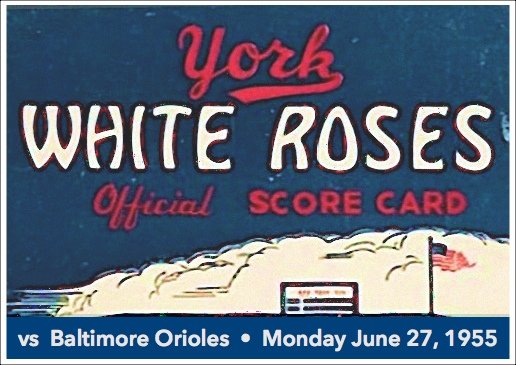 Brooks Robinson helped the York White Roses defeat the Baltimore Orioles at York’s Memorial Stadium in June of 1955. The news, that the sixth-place farm club slammed the big-league team for 13-runs, made front page news in Baltimore; quoting the opening lines from the Baltimore Sun of June 28th:

“York, Pa., June 27—The Orioles proved conclusively here tonight things are never so bad they can’t get worse. Blasting Joe Coleman for three runs on four hits in the first inning, the York White Roses Class B farm affiliate of the Birds toyed with the Flock as they ran up a 13-to-1 victory before an overflow crowd of 3,495 in Memorial Stadium here.”

Yesterday, while at New Eastern Market, a guy recognized me and made a comment about enjoying my posts and talks. In a conversation that followed, he asked if I knew anything about White Rose baseball history. I admitted to know just a little; which was enough for him to ask a question.

At a recent family gathering, an uncle claimed a ball game in the 1950s between the White Roses and the Orioles was between two minor league teams, one of which just happened to be called the Orioles. However his father claimed that game was against the real deal Baltimore Orioles because Brooks Robinson, playing for the O’s, was on the field. He wanted to know which was true.

That happened to be a ball game I knew a little bit about. I told him neither statement was completely true. The game was against the real Baltimore Orioles, however that day Brooks Robinson was a member of the White Roses team. As I walked around market, I became curious how the Baltimore Sun reported that game, because as I recalled, the Orioles lost that baseball game by a wide margin.

Quoting a few additional paragraphs from the Baltimore Sun article:

“Old Ken Raffensberger, who was recently signed by the Birds to bolster the York staff, after being released by Havana of the International League, was the starter and winner, blanking the Birds on three hits over the first three innings with his assortment of slow stuff.”

“Bob Hale, .375-hitting first baseman, led the 13-hit York attack with 3 hits, while 18-year-old Brooks Robinson and Charlie Ferrante each belted homers. Ferrente driving in four runs during the evening. Robinson’s drive went over the 380-foot sign, off Coleman, and the youngster, who has raised his Piedmont League average from .231 to .312 in three weeks, also added a single and walk during the contest.”

Earlier in the month, on June 3, 1955, Brooks Robinson made his professional baseball debut for the York White Roses as a second baseman. That game was played in front of a crowd of only 939 at Memorial Stadium. Robinson went 0-for-1 in his first game, in substituting for an injured player near games end.

Brooks Robinson steadily improved throughout the 1955 season with the White Roses; playing 54 games at second base and 40 games at third base, and finishing with a .331 batting average. From that beginning, Brooks established himself as the best third baseman in baseball and was inducted into the Baseball Hall of Fame in 1983.

Here is the Box Score for the June 27, 1955 exhibition game between the Baltimore Orioles and the York White Roses: