Thanks for the outpouring of comments on my recent post: Pennsylvania’s first Gino’s was in Springettsbury.  One reader commented: “You say Gino’s on East Market opened in the spring of 1961. While I distinctly remember it opening in the late fall of 1960. I remember the weather being rather cool.”

My source for a spring of 1961 opening was an autobiography that I started just after grad school. Therefore I relied upon my memory, of 15-years earlier, when that autobiography item was written; however it was supported by dates of surrounding events that were easily checked.

Nevertheless, I started my search anew. Use of indexed newspapers again proved unsuccessful, because of limited coverage in those years. Saturday afternoon I resorted to the brute force approach, i.e. searching weeks of newspaper microfilms at the York County History Center. That search was successful; Gino’s full-page Grand Opening ad is displayed at the end of this post.

As a result of the Gino’s search, I came across a long forgotten “ future question to look into” within my autobiography files. That question was rapidly answered via indexed newspapers. The question directly relates to an exhibition basketball game in our school gym by Baltimore Colts players while I attended Central York High School. Our 1968 yearbook contains two photos from that basketball game. The photo of John Mackey and Johnny Unitas on the bench is from page 122 and a photo of Johnny Unitas shooting a foul shot is on page 165. For the 1967 season, in a landslide, Unitas was voted the Most Valuable Player in the National Football League. Johnny Unitas, completing his 12th season, received all the votes, except for 3-votes going to Deacon Jones and 2-votes each for Leroy Kelly and Gale Sayers.

I started to root for the Baltimore Colts during the 1958 and 1959 seasons when they won back-to-back NFL Championships. In the following years, Dad and me would always watch the Monday night Baltimore Channel 2 TV show, “Corralin’ the Colts,” in which the players and coaches always had a great time reviewing their previous game. Through a salesman at work, Dad got two tickets to a Colts game on October 18, 1964, and he took me to the game. That game, in Memorial Statium, was against the Green Bay Packers; coached by Vince Lombardi. Former Colts player, Don Shula, coached Baltimore and they won the game 24-21. That game was the moment that I became a serious Baltimore Colt fan for life. Six eventual Baltimore Colts Hall of Famers played in that 1964 game. All are represented on the only autographed sports item in my possession. 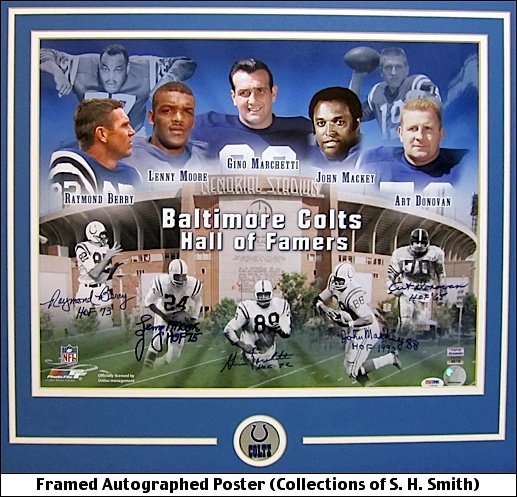 This poster was printed for a signing event ten years ago. As soon as I saw it, I had to have it. I liked the way Memorial Stadium on 33rd Street ties everything together. Jim Parker, upper left, and Johnny Unitas, upper right, had already passed away. The remaining five Baltimore Colts Hall of Famers signed the poster. Art Donovan is the player that retired prior to the 1964 game. Art Donovan and John Mackey have since passed away. Raymond Berry, Lenny Moore and Gino Marchetti round out the players on this poster. Besides the seven players shown on this poster, several Hall of Famers associated with other career teams, also played for the Baltimore Colts.

The Colts would go on to win Super Bowl V following the 1970 season; Johnny Unitas and John Mackey were on that team. Following the 1983 season, owner Robert Irsay swept the Colts’ Baltimore football heritage off to Indianapolis.

Gino Marchetti, the long-time captain of the Baltimore Colts was inducted in the National Football League Hall of Fame in 1972. The Grand Opening of the drive-in restaurant, bearing his name, at 2500 East Market Street in Springettsbury Township, York County, PA, occurred Thursday evening April 20, 1961 at 7:00 P.M. 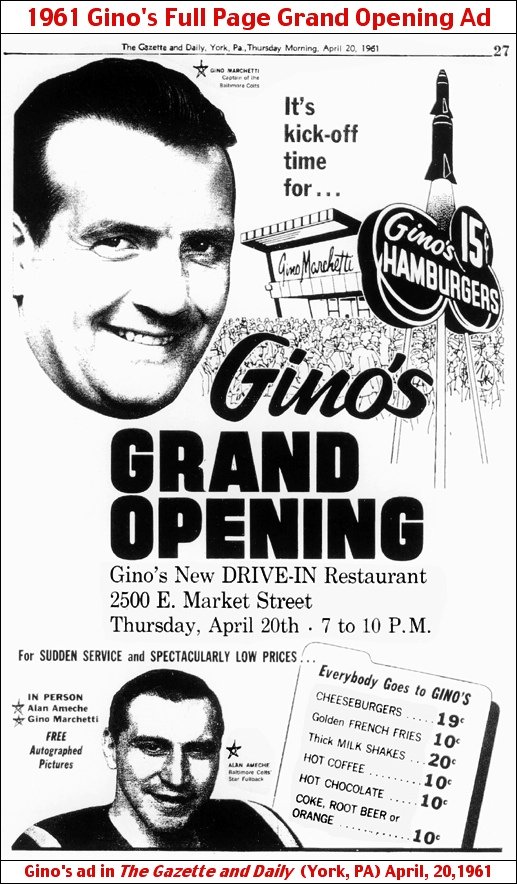 The April 20, 1961, full-page ad in The Gazette and Daily has both Alan Ameche and Gino Marchetti there autographing pictures. Note they did not market the drive-in as fast food, but instead “Sudden Service.”