Take me out to the Ballgame of Yesteryear

This “Take me out to the Ballgame” sheet music cover comes from online collections of The Library of Congress. The song resulted from the collaboration of lyricist Jack Norworth with composer Albert Von Tilzer and was published by The York Music Company, of New York City, in 1908.

Norworth had never attended a baseball game. He wrote the lyrics upon seeing a sign advertising a baseball game in New York. He went to his first Major League baseball game many years later; on June 27th, 1940, where the final score was Brooklyn Dodgers 5 and Chicago Cubs 4.

“Take me out to the Ballgame” serves as an introduction to a baseball game that took place 120-years ago. That baseball game pitted teams from rival newspapers in York, Pennsylvania; the Gazette versus the Daily. Following are details of that ballgame where “several pitchers were murdered” and learn why this rivalry stopped in 1918.

BASEBALL. Count One For the “Daily” Team.

A good sized audience collected on the Fairmount grounds yesterday afternoon to witness the contest between the DAILY and a picked nine composed of the GAZETTE and other clubs. It was to be a game between the employees of the respective offices, but the DAILY’s opponents failed to stick to the prior arrangements. It didn’t make any difference, however, as it was a “cinch” for our boys from the start, as the opposing team were at no time in the game. Several pitchers were “murdered” before the battle was over, and when the smoke cleared away the DAILY was found to be on top. Score: 39 to 18. 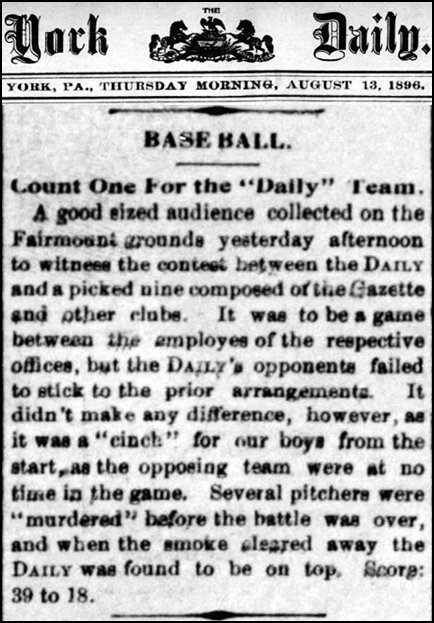 This baseball rivalry between the Gazette and the Daily stopped in 1918. The last issue published individually for each newspaper occurred on June 22nd, 1918. Beginning on June 24th, the newspapers were consolidated into one morning paper, published by the York Gazette Company under the title of THE YORK GAZETTE AND YORK DAILY. The following clipping of July 2nd, 1918, shows the appearance of this new banner. 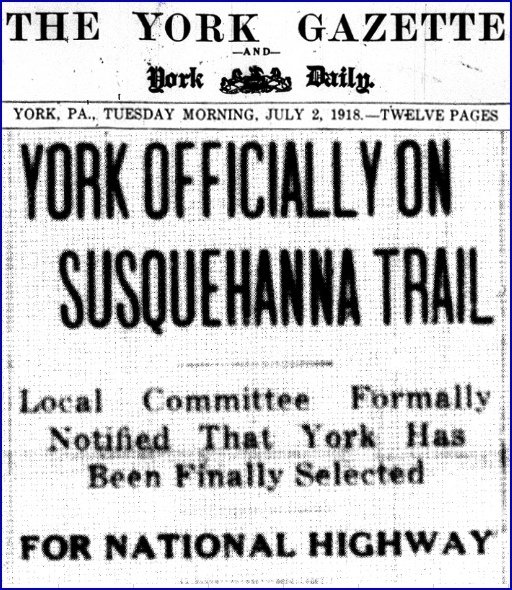 It was reported the consolidation of the newspapers became necessary because of paper and labor shortages during WWI. The long title THE YORK GAZETTE AND YORK DAILY lasted until August 29th, 1918. Commencing August 30th, 1918 the newspaper title was shortened to THE GAZETTE AND DAILY; a York newspaper name that spanned over five decades.