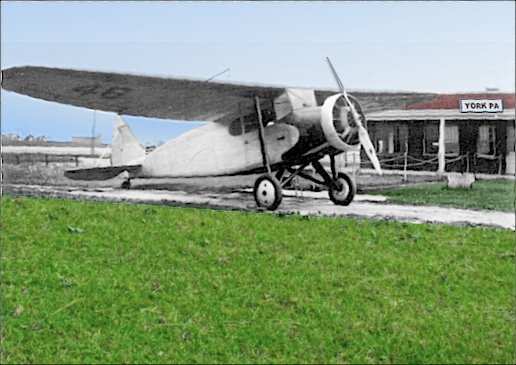 Stories of Aviation in Springettsbury

Aviation in Springettsbury is the topic for the inaugural History Night in Springettsbury Township. It is being held Wednesday July 14, 2021, at 7:00 PM in the Township Administration Building Board Room. Even though construction fences are up; the functions in the 1501 Mt. Zion Road building are continuing through the end of July; after which temporary offices will be utilized.

The presentation will cover 40-years of aviation stories related to Springettsbury Township; from 1912 through 1952. In preparing for this presentation, new details and stories were uncovered, plus some neat photos were discovered on the Library of Congress web site.

One of the stories from the 1930s, deals with the first commercial airport in York County. That is where the introductory 1931 photo was taken; showing a TravelAire airplane ready to load up to 5-passengers, for a regularly scheduled flight to Pittsburgh, Philadelphia or New York. When the airport opened in 1930, it was located along the west side of Airport Road in Springettsbury Township. The name of that road was changed to Haines Road after that airport closed in 1937.

The Stony Brook Army Air Field is one of the stories from the 1920s. Extensive deed research, and the discovery of 1925 and 1930 experimental air navigation maps by the Airways Section of the U. S. Army, allowed pinpointing the location of that earliest permanent airfield in York County. The airfield location, via those early air maps, coincides with the site of a one-and-one-quarter mile automobile board speedway to be built in 1925 near the Lincoln Highway, east of York, at an expenditure of $500,000.

Per newspapers accounts in 1925, in conjunction with the speedway project, the United States Intermediate Air Station at Middletown accepted an offer to use a section of the infield of “The Great Lincoln Speedway” for a permanent emergency landing field. The Stony Brook Army Air Field opened on July 28, 1925; and existed for about 5-years. For this post, I’m including two of the illustrations, which were created primarily for research purposes.

On the following aerial photo, the former Stony Brook Army Air Field site is shown where it was located within the infield of a planned 1.25-mile racetrack. The boundaries of the three farms, establishing the site of THE GREAT LINCOLN SPEEDWAY, are outlined on a 1955 aerial photo; where the view looks WEST from the Stony Brook / Pleasant Acres area of Springettsbury Township, York County.

Newspaper articles report rights to three adjoining farms were acquired in 1925 to build THE GREAT LINCOLN SPEEDWAY. Referring to the illustrations: Farm 1 was owned by John W. Hartley. Farm 2 was previously owned by Frederick R. Strickler and in 1925 by his widow Amanda Strickler and her sister-in-law Mary Strickler. Farm 3 was part of the John Hauser estate.

Farm 1 was purchased outright by Victor H. Cocklin, an investor in the Lincoln Reality and Amusement Company; the organization behind the speedway project. Rights to Farms 2 and 3 were obtained via sales agreements; with which upon the Buyer completing all timed payments, the Title of the properties would be conveyed to the Buyer.

The Stony Brook Army Air Field was established and put into operation before work commenced on construction of the speedway. That announcement, appearing in The Gazette and Daily of August 4, 1925 noted: “Work has begun on the Hartley farm, east of the city near Stony Brook, to put it in condition for the actual construction of the proposed Great Lincoln Speedway, according to a statement given out last night by officials of the Lincoln Reality and Amusement Company.” It remains uncertain how much construction was completed prior to all work stopping on the speedway, later in 1925.

When board speedways shut down, often all of the wood was removed, and the fields returned to agricultural uses; leaving little, to no, trace of the existence of a speedway at a site. The following one and one-eighth mile board speedway, which opened in Laurel, Maryland, on July 11, 1925, gives an idea what these all wood (including track surface) speedways looked like. The foreground shows the wood structure to create the shallow front stretch banking; which increases to 40 degrees banking in the turns.

I believe this speedway in York was part of the 1920s board racetrack craze that swept the United States. During the 1920s, National Championships for Automobiles were sanctioned by the Automobile Association of America. Their big event each year was the 500-miler, on the bricks, at the Indianapolis Motor Speedway, however an average of 11 additional races were run each year that counted towards the National Championship. During the 1920s, three-quarters of these remaining races were run on the wooden surfaces of high-banked board speedways.

The huge financial success of the 1.25-mile board Altoona Speedway in Pennsylvania, opening in 1923, is credited with the opening of similar length, high-banked board speedways that followed on the East Coast. The most successful of these were: the 1924 Charlotte Speedway in North Carolina, the 1925 Baltimore-Washington Speedway in Laurel, Maryland, and the 1926 Atlantic City Speedway in New Jersey. These all cost approximately $500,000 and involved many railcars of lumber to construct; just like the speedway described for York.

The following scale layout, on a current aerial photo, indicates where THE GREAT LINCOLN SPEEDWAY was to be built in 1925, near Stony Brook in Springettsbury Township. The 1.25-mile track has 1,730-foot straightaways and 500-foot radius turns. Grandstands, along the front stretch and back stretch, seat 15,000 spectators, each.

What happened to the three farms in 1926, after work ceased on THE GREAT LINCOLN SPEEDWAY.

Victor H. Cocklin continued to own the Farm 1 property. He farmed around the small area set aside for the Stony Brook Army Air Field. He had considered plans for a housing development, however in 1929, the farm was acquired by York County and was known as the York County Poor District. On that property, County buildings for the poor opened in 1930; however most of the land operated as a County Farm, serving as an additional food source for the poor and for the prison. After new medical buildings were opened in 1950 and a shift was made to institutionalized nursing care, the facilities were renamed Pleasant Acres in 1952.

With payments not longer made per the sales agreement, the Strickler (Farm 2) property continued to be owned by Amanda Strickler and her sister-in-law Mary Strickler. In 1926, they sold the farm to neighbor Ambrose Miller. Farming continued around the small area set aside for the Stony Brook Army Air Field. In 1943, the Miller family sold that property to the York County Institution District; where the York County Prison is now situated. It is interesting to note on the 1943 Deed, the neighboring property to the east (i.e. Farm 1) is described as: “along lands formerly of Lincoln Speedway Association, now of York County Home;” (Reference: Deed Book 29U, page 157).

The Hauser (Farm 3) property was farmed for years before being developed into a Business Park. It is now known as Concord Business Center; part of Kinsley Properties.

History Nights in Springettsbury are a venture of the Springettsbury Township Historic Preservation Committee. The plan is to offer these programs three times a year; from 7:00 o’clock until 8:30 in the evening, during the second Wednesday of April, July and October. The events will consist of a presentation on an aspect of township history, followed by questions; then in the final half-hour, sharing of related stories by members of the community.

Exercising Buffaloes via Airplane in Springettsbury

Learn story of this Goodyear Blimp in Springettsbury