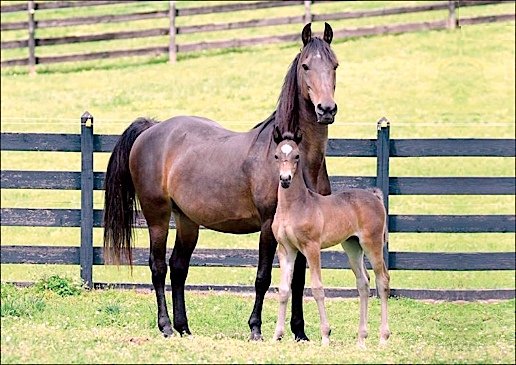 Cathy Ross shared stories of riding horses at Avalong Farms Morgan Stable and then working at their Barn Mall; in the Blue Sky Jean Shop and at the Boring Furniture Outlet. Prior to the opening of the Galleria, the Avalong Farms Barn Mall housed 25 shops in their former horse barn. Even so, that barn site played a part in the backstory of the Galleria Mall.

Avalong Farms Morgan Stable featured the Morgan breed of houses; which is one of the earliest horse breeds developed in the United States. These stables opened in the summer of 1973, as “York County’s Newest & Most Modern Riding Stable, with Indoor & Outdoor Riding Facilities.” The stables were located a short distance north of Avalong Dairy Bar & Drive-In; on the hillside where the Springettsbury Township Public Works facilities now exist; i.e. the northeast corner of Mt. Zion Road and Pleasant Valley Road.

Quoting the e-mail from Cathy Ross: “As part of a Girl Scout program I took my first riding lessons at Avalong ‘s Morgan stables in about 1976. My trainer was Kathy. Our greetings: Good afternoon, Cathy, with a C, and I would reply good afternoon Kathy, with a K. Soon, the greetings shortened to: Good afternoon C, and I replied good afternoon K. I was sad to see this really nice stable close down. I understand the owners believed they could make more money by turning the massive barn into a shopping mall. Maybe this is where the owners got the idea to sell the rest of their farm to the Galleria Mall developer. I worked part time at two of the shops in the Barn Mall: the Blue Sky Jean Shop, and the Boring Furniture Outlet. The furniture was not boring, that was just the name of the man founding the company. To answer the often asked question about the name, there was a framed story of the company history on the shop wall. The Boring store is where I first met my husband, when he was a customer. He is not boring!”

Cathy submitted the following Avalong Farms Morgan Stable postcard, with a few questions; which are answered in this post. This post also turned out to be an appropriate place to answer closely related queries from several other readers.

Cathy was trying to remember some of the names associated with the stable and the shops at the Barn Mall. Using Newspapers.com, I discovered Kathy Ranzinger is mentioned as a trainer at Avalong Farms Morgan Stable.

Years ago, while volunteering at the York County History Center, someone asked about Boring Furniture. If I can’t quickly locate a file on a subject, step two is often a Google search of YorkBlog posts. I remembered Jim McClure wrote about this company. Boring Furniture was founded in North York, at Laurel and Court Streets by Henry E. Boring.

An article in the York Daily Record of November, 25, 1977 has the headline: “Boring Company Expands, Moves.” In the article Jerrold R. Kline, president of Boring Furniture Company, announced the acquisition of the assets and property of Merchant’s Box Company, Broad and Lombard Streets, in Dallastown. All manufacturing and offices have been moved to the new location from the [North] York location where the company was founded in 1909. In concert with expanded product lines, the company has changed its name to Boring Manufacturing Company, Inc. A follow-up search, showed the Boring Manufacturing Company went out of business in 1984; being sold at Sheriff’s Sale on September 24, 1984.

The location of the Avalong Barn Mall is pointed out at the upper left of the following 1981 aerial photo. This site, at 1601 Mt. Zion Rd., is where Avalong Farms Morgan Stable opened in 1973; and then in 1981 that site was converted into the Avalong Barn Mall, with facilities for 25 shops. The aerial photo is annotated with the period surroundings. Avalong Dairy Bar & Drive-In, . . . Tourist Information Center, . . . and Springettsbury Township School have previously been written about. The 44-acre Springettsbury Township property, as of 1981, is highlighted in yellow, with Township offices / police station on east side of Mt. Zion Road and township public works building on the west side the road.

This 1981 aerial photo appeared in my previous post, Origins of Springettsbury Township Park. Two readers questioned the dark feature just north of the Barn Mall. Page 116 of the 1991 Springettsbury Township History notes: “The Fritz Ore Bank is located in a small wooded grove about 250 feet east of Mt. Zion Road, just north of the Avalong Barn Mall.” The ore bank was opened in 1865 on the property of Susanna Fritz, and was worked until 1873. The bank is about 40 feet deep and is water-filled, per the 1981 photo; and was later filled in.

Many readers questioned why and when the original Springettsbury Township Public Works Building site, on the west side of Mount Zion Road, was shifted to the Barn Mall site. In 1987, Johnstown land developer George Zamias, held an option to purchase 65-acres of Avalong farms property. Zamias proposed building a four-anchor-store, two-level mall, originally known as the Meadowbrook Mall; however with an ultimate name change to the Galleria Mall by the end of 1987.

The 10.4-acre Avalong Barn Mall site was also optioned land held by Zamias. Throughout 1987, Zamias proposed various land swaps with Springettsbury Township, to allow a better placement of the Mt. Zion Road entrance to the Mall. The final deal, which Springettsbury Township Supervisors approved December, 21, 1987, included swapping the township-owned 8.1-acres on the west side of Mt. Zion Road for the 10.4-acre Barn Mall site on the east side of Mt. Zion Road. Zamias also paid the township $700,000 cash and paid to have the new township public works facilities built. Another condition had Zamias agreeing to construct a township road, not only across the northern part of the Galleria property, but extending from Memory Lane Extended to Mount Zion Road; that road would ultimately be named Pleasant Valley Road.

Bussing horses to 1955 Race Track built near the Shoe House