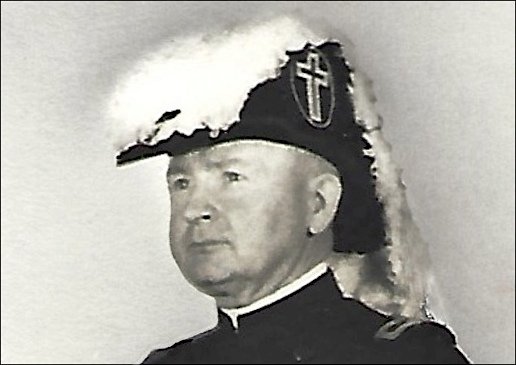 Michael Miller shared a photo of his grandfather, Augustus H. Schaefer; York florist and developer of Stony Brook Heights in Springettsbury Township. Within that development, a site for Augustus H. Schaefer Memorial Park was deeded to the township in his memory. The Springettsbury Township Historic Preservation Committee will utilize the photo on an interpretative sign to provide a brief history of Augustus and his namesake park.

The photo shows Augustus H. Schaefer in his Templar uniform; with usual masonic chapeau adorned with feathered plumes. This photo was taken when Augustus was Commander of Gethsemane Commandery No. 75, Knights Templar; in York, PA.

Two years ago I wrote about Augustus H. Schaefer Memorial Park in Springettsbury Township and the search for a photo of Augustus H. Schaefer [1885-1960]. We learned none of his descendants remained in York County. Michael Miller has been living in Boulder, Colorado since 1972; however does return to York, about every 10 years or so, to visit friends.

Michael Miller grew up in Stony Brook Heights at 142 Lynbrook Drive South. He played at the park site before it was deeded to the township, when a small stream ran through the site amongst fallen trees; and then played there in the developed park.

It was confirmed the park was developed in 1963 via an article, covering a Springettsbury Township Supervisors meeting, appearing within the York Dispatch of July 11, 1963: “Work on grading the new Schaefer Memorial Park, which is being constructed at a cost of $5,598.50, will be completed tomorrow, according to the township engineer.”

Springettsbury Township has received a $130,000 grant for improvements to Augustus Schaefer Park and $45,000 for new playground equipment has been authorized. The work began a few weeks ago. Therefore the PARK is CLOSED during improvements. The beginning of that work, as of March 2, 2021, is documented in the next three photographs.

Construction of the original basketball court in the park was funded by a contribution from the Kiwanis Club of York; an organization of which Augustus Schaefer had been an active member.

My exposure to Augustus Schaefer Park began in the 1970s. Beginning in the gasoline-shortage years, I was in a workplace car pool with several engineers, from that area of Springettsbury Township, to and from the York Division of Borg-Warner plant on Richland Avenue. Don Hoch was part of that car pool; he was also an Eastern York County (EYC) League baseball coach, for the Wilshire 8-10 and 10-12 teams that utilized the baseball field at Augustus Schaefer Park. Don asked me to fill in for one of the league’s normal first base umpires for a few games. Don provided an invaluable umpire clinic in his backyard. I would be an alternate EYC first base umpire, primarily at Augustus Schaefer Park, for several years. The EYC League included teams from Wilshire, Pleasureville, North Hills, Yorklyn, Hellam, Wrightsville, East Prospect, and Yorkana.

In the following photo, appearing in The Gazette and Daily of December 28, 1962, George Eyster, at left, receives a plaque as Kiwanian of the Year from Daniel Sparler. Eyster’s project was peanut brittle sales, totaling 5,200 pounds, which funded basketball courts at Lincoln Park and Windsor Park, and two new ones to open in the spring at Albemarle Park and August Schaefer Memorial Park.

When Michael Miller shared the photo, shown at the beginning of this post, he thought his grandfather might have been in his Kiwanis uniform, since Augustus Schaefer was extremely active in that organization. Maybe that is why the Kiwanis Club of York decided to fund the original basketball court in Augustus H. Schaefer Memorial Park.

However after asking around and then confirming via a 1944 York Dispatch photo of Augustus Schaefer, the shared photo shows a Templar uniform; with usual masonic chapeau adorned with feathered plumes. In 1944, Augustus H. Schaefer is Commander of Gethsemane Commandery No. 75, Knights Templar, in York.

The following photo is from an article entitled “Services by Knights Templar on Sunday; Will March in Body from Masonic Hall to Christ Lutheran Church:” “Members of York Commandery No. 21 and Gethsemane Commandery No. 75, Knights Templar, will conduct divine services Sunday evening at 7 o’clock in Christ Lutheran Church. . . . This will revive the custom of the two commanderies holding joint divine services annually. The last of these services was held in 1940.”

Gethsemane Hall at 111 North Beaver Street in York, PA, was built in 1918 as the meeting hall of local Freemasons. The castle-like building was a gift of Thomas Shipley, then Commander of Gethsemane Commandery No. 75, Knights Templar.

Gethsemane Hall was utilized as the meeting hall of local Freemasons until 1971; at which time the new Masonic Center of York opened in Manchester Township at 400 Masonic Drive. The 1918 castle-like building still stands in York with a repurposed use still to be determined.

Roy Rogers in York and at Valley View Park