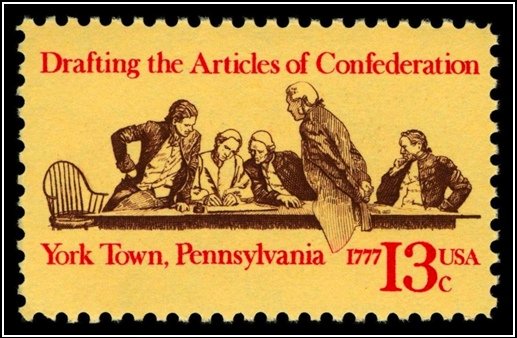 The courthouse on the square in York Town, Pennsylvania, was the site where Continental Congress adopted the “Articles of Confederation and Perpetual Union between the States” on November 15, 1777; 240-years-ago from the date of this post.

This 13-cent United States Postage Stamp was issued in 1977; commemorating the 200th anniversary of the drafting and adoption of the Articles of Confederation in York, PA. The Articles brought the thirteen states, in revolt against England, together as a united group of states; be it a loose confederation. Click on this LINK for a Full View of the illustration in this post if details are cut off in the cropping of illustration.

The colonies had just broken from England because they detested the heavy-handed rule by England. As a result, in creating the Articles, the states were not about to give their new federal government strong power.

The Articles set Congress as the only branch of government. Congress could sign treaties, declare war, borrow money, but could not tax. Congress relied upon voluntary contributions from state governments. Congress could pass bills affecting states and individuals; however Congress had no power to enforce them. Even so, passing bills was a challenge in itself; for at least 9 of the 13 states had to agree to any bill for it to pass in Congress.

Nevertheless, the Articles of Confederation were very important in the young history of this country; they served as the framework of the United States federal government for 12-years. The Articles major value was holding all the states together in a mutually beneficial arrangement until the present United States Constitution, with stronger federal government, went into effect on March 4, 1789.

Links to stamp related posts include: