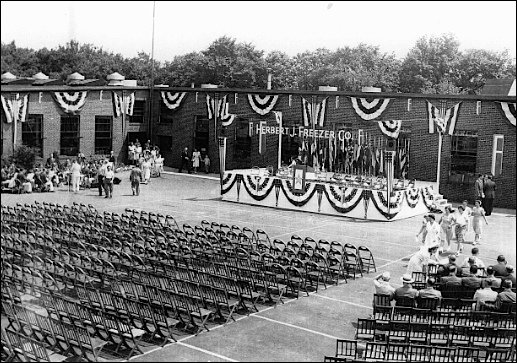 The H. J. Freezer Company post of Tuesday quickly resulted in nine questions from readers. That military apparel company in Spring Garden Township was granted the Army-Navy “E” Award, for excellence in production, on June 27, 1944.

In addition to replying individually to the e-mails, I’m sharing the answers in this post. The majority of the readers asked if there are any additional photos where one might identify more of the company employees. The York County History Center has several more photos taken the day of the companies Army-Navy “E” Award presentation. Two photos are views of all the employees in their seats during the program; as viewed from the speaker’s platform. If the person you’re looking for happened to be in the first few rows, there is a chance you might be able to make the identification.

How long was H. J. Freezer Company in business after the war? Only a few weeks after the war ended, F. Jacobson & Sons, Inc., of New York City, acquired the plant. Jacobson rapidly converted to making a line of sportswear and pajamas, and also increased employment at the plant. As for Herbert J. Freezer, he became active as a Broadway producer in New York City. In 1963, Jacobson sold all eight of their apparel plants, including the one in Spring Garden Township, to Kayser-Roth Corporation, a diversified apparel manufacturer based in New York City.

Ben Turner claimed both sides of East Street are in York City and thought the H. J. Freezer plant might actually be in the city. I checked various maps, including the York County tax assessment map, and confirmed Ben is correct about East Street not being the city boundary. The boundary actually runs through the back yards of the homes on the east side of East Street. However at the railroad tracks, the city line heads west along the tracks for a short distance.

On the following 2015 aerial photo, I’ve pointed out the township boundaries with York City in the area of the former H. J. Freezer Company. The H. J. Freezer plant, on the north side of the railroad tracks, is definitely in Spring Garden Township. Mill Creek is the boundary between Spring Garden and Springettsbury Townships.

Dick Snyder walked up to the plant on Thursday, but could not quite understand where the speaker’s platform would have been located. Dick was using the following courtyard photo, provided in my Tuesday post, as his guide.

By comparing aerial photos, the part of the building in front of which the Spring Garden Band sits at the upper left of the courtyard photo; is now torn down. That fact likely made identification difficult for Dick. The following 1957 aerial photo of the plant has been annotated to show location of the Courtyard employee seats and Speaker’s Platform, shown as yellow rectangle; when the H. J. Freezer Company was granted the Army-Navy “E” Award, for excellence in production, on June 27, 1944.