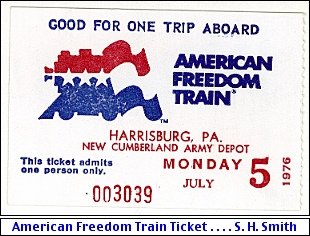 I recently discovered the ticket stub from my tour of the American Freedom Train during the Bicentennial. It had been lost between the pages of race car driver Mark Donohue’s book the “The Unfair Advantage;” probably ever since I last read that book in 1976.

This find resulted in further research on the Internet and at the York County Heritage Trust. The 1975-1976 Freedom Train was similar to a 1947-1949 Freedom Train, which also toured the whole country; with the primary difference being documents versus artifacts.

The 1947-1949 Freedom Train focused on bringing the DOCUMENTS of American liberty directly to the people from the National Archives and the Library of Congress. That train had a one-day exhibition stop inside the York Fairgrounds on October 9th, 1948.

A much longer train traveled the country during 1975-1976 to celebrate the United States Bicentennial. That train was officially known as The American Freedom Train; exhibiting ARTIFACTS representative of the 200-year history of the United States of America. 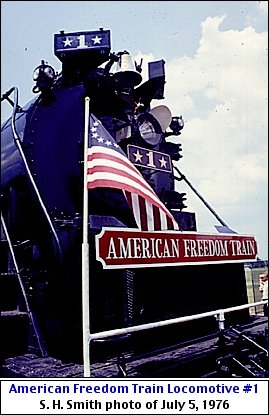 The American Freedom Train was pulled by one of three enormous steam locomotives; as it visited cities throughout all 48 contiguous states from April 1st, 1975 through December 31st, 1976. This time York, Pa. was not selected as a host city for the American Freedom Train, however this impressive 26-car train did have a brief whistle-stop at the train station in Downtown York.

After finishing up a June 29th & 30th exhibition stop in Cumberland, Md., July 1st was the travel date prior to the next exhibition stop at the New Cumberland Army Depot, in northern York County, from July 2nd to 5th, 1976. Therefore York County does have the distinction of having The American Freedom Train on its soil during the whole Bicentennial Weekend, plus the key Bicentennial date; July 4th, 1976.

During July 1st, the train stopped briefly in Gettysburg, where Mrs. Mamie Eisenhower, widow of President Dwight D. Eisenhower boarded the train. The train then traveled through Hanover prior to arriving at the train station in York. Newspaper accounts have the train arriving in York, Thursday evening at 6:00 o’clock, where Mamie Eisenhower disembarked the train for a limousine ride back to Gettysburg. The train then resumed its journey over the old Northern Central Railroad tracks from York to the New Cumberland Army Depot.

The following photo shows the queue of visitors, at the left coming towards me, under the shade of the one of the long loading docks at the depot. I waited in the parking lot and that line for about two-hours. The photo was taken just as I crossed into the Entrance Car #100. That car was for security; admissions and it allowed visitors time to adjust their eyes to the darker interior. Each visitor was given an individual sound unit that played narrations coordinated with the exhibits. The moving walkways keep the crowd moving at the same pace in all the cars, moving out into the distance. It took about 25-minutes to get through all the display cars. 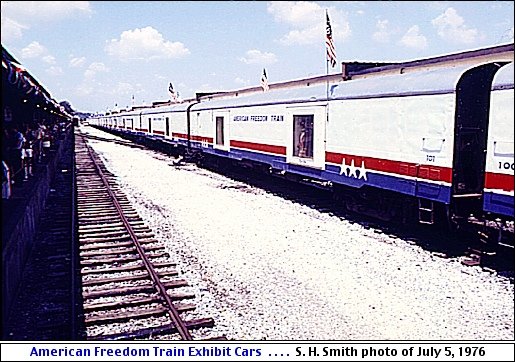 For the proper operation of the moving walkways within the display cars, exhibition stop locations needed one-half mile of straight, level track. Support equipment needed plenty of room around the train; in addition ample parking for the many visitors was required. Both York and Harrisburg did not meet these site requirements; however the New Cumberland Army Depot did meet the requirements and was selected. Since the depot was closer to Harrisburg, it was billed as a Harrisburg stop; even though the stop was actually located in York County.

The steam engine that pulled The American Freedom Train through York County in 1976 was the former Reading #2101. This steam locomotive was originally built in 1923 in a 2-8-0 configuration by the Baldwin Locomotive Works and was rebuilt during 1946 in a 4-8-4 configuration at the Reading Shops in Reading, Pa. The drive configuration was changed for heavier freight and longer passenger train demands. By 1955, the increasing use of diesel locomotives sidelined #2101, except for its occasional excursion use, until it was officially retired in 1967. The Reading #2101 steam locomotive was pulled from retirement and given a complete overhaul to pull The American Freedom Train and was designated AFT Locomotive #1. 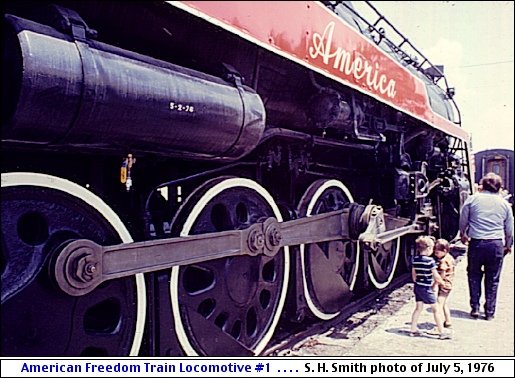 The specifications on this locomotive are: weight, 221 tons; driver diameter, 70 inches; and cylinders, 27 x 32 inches. This steam engine now has a permanent home at the Baltimore & Ohio Railroad Museum in Baltimore, Md.