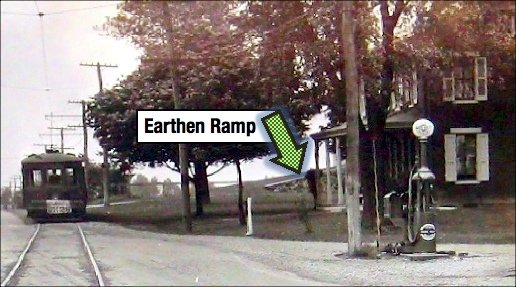 Bank barns get their name by being built on the side of a hill, or bank, so that two separate floor levels could be accessed from ground level directly. If a hill was not available, an earthen ramp was added against one of the, often stone, ground floor barn walls to create a ramp for direct access to the second level of the barn.

The barn housing American Daydream Antiques and Miscellanea, in Springettsbury Township, was a bank barn; up to the time Paul and Dorothy Ettline purchased the property in 1945. Paul removed the earthen ramp on the north side of the barn to provide parking for his customers, prior to opening an antique business there in 1946. The upper level barn doors were replaced by an array of windows. The following photo depicts what the earthen ramp might have looked like, had it remained in place.

The actual earthen ramp is pointed out on a circa 1925 eastward looking photo of the property at 3790 East Market Street. Even though the house shields the barn, the entrance to the earthen ramp is clearly seen.

Dating the photo as circa 1925

The first clue involves the Lincoln Highway humpback bridge that was located at this section of East Market Street, until being demolished during the Summer of 1998. The following 1998 photo is an eastward looking view of the humpback bridge that carried East Market Street automobile traffic over Stony Brook Road and the railroad tracks to the right side of the photo.

In the following 1998 photo, I’ve zooming in on the buildings sitting to the south side of the eastern paved bridge ramp that the automobiles used to reach the bridge deck. The building in the foreground is the warehouse located at 3780 East Market Street. The building in the background, with ANTIQUES lettered on the house, is Paul Ettline’s property at 3790 East Market Street, which is now the home of Greg and Maria Koller, who will be operating their business in the barn on the property; as American Daydream Antiques and Miscellanea.

The humpback bridge was built earlier than many 1998 articles reported. Newspaper articles of 1927 document many people killed at that Lincoln Highway grade crossing of the Pennsylvania Railroad and the trolley lines; citing difficult lines of sight owing to the shallow angle of the intersection of the rails and roadway. Accidents at that crossing often involved the combination of train and automobile(s) being shielded by a trolley car. Approval to build the $167,432 bridge was done in the interest of safety. The Lincoln Highway humpback bridge opened November 23, 1928.

If you remember the location of the Ettline House and Barn when the humpback bridge stood; you know the circa 1925 photo had to be taken before the bridge was built; thus the photo can be dated prior to 1928. Also the wider view of circa 1925 photo shows young sycamore trees planted along the north side of the Lincoln Highway; which are very likely part of the 1,500 memorial trees planted between Abbottstown and Wrightsville during 1922. Therefore circa 1925 for the photo makes sense.

Route of the trolley tracks

The wider view of circa 1925 photo shows the trolley crossing from the north side to the south side of the Lincoln Highway. To understand why, look at the following illustration. I’ve marked the path of the trolley on a 1937 Penn Pilot aerial photo. In the Stony Brook area, the trolley travels the route of the green and white dashed lines from the lower left, where it crosses over the northern end of Locust Grove Road, to the upper right corner, on its way to Wrightsville.