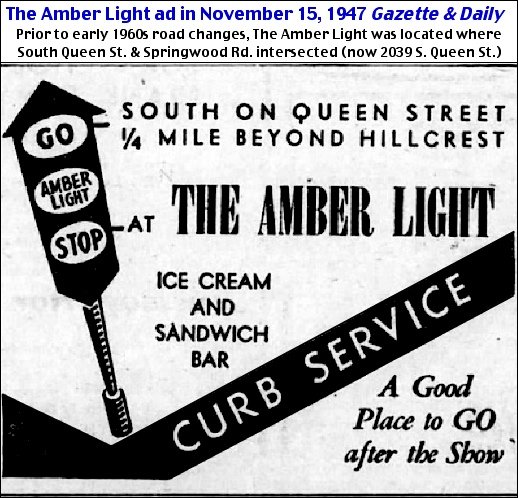 A month ago questions about the Amber Light drive-in were asked of me. Then, a few days ago Terry Downs brought up the Amber Light. These, out-of-the-blue, queries were unusual, for it had been at least 30-years since I last heard about that drive-in; located at the intersection of South Queen Street and Springwood Road. In terms of today’s road numbering, it was located at 2039 South Queen Street.

This Amber Light ad appeared in the November 15, 1947, issue of The Gazette and Daily. The Amber Light drive-in sold hot and cold sandwiches and featured Warner’s ice cream.

I selected this specific ad because there was an additional story to go with it. The ad notes, “A Good Place to GO after the Show.” The following day, November 16, 1947, was the first day when the blue-law ban on showing Sunday movies was lifted in York.

My dominant memory about The Amber Light is when my parents were reminiscing, close to 30-years ago, about building their first home. The 2150 South Queen Street house was constructed during 1948 on a quarter-acre lot at a corner of the farm of my grandparents, Emanuel and Cora Barshinger.

After the house was put under roof, Dad, Harold L. Smith, and my grandfather, Luther S. Smith, finished the house. Mom, Esther L. Smith, and Dad would also often work on the house a few evenings and during weekends. They enjoyed using the curb service at the Amber Light drive-in, since they were usually in their work clothes. Mom enjoyed seeing many of her friends and children of friends who did the curb service. On the west side of Queen Street, at that location, was the farm of Mom’s grandfather; John H. Barshinger.

John and Ellen Barshinger had 15 children; 10 boys and 5 girls. Son Wilson W. Barshinger was the next owner of the 10-acre farm of his father; its address: 2038 South Queen Street. Most of the other boys, including my grandfather, had farms along South Queen Street, stretching to Spry. The produce from many of these farms was sold at the City Market in York.

I’ve annotated the following 1955 aerial photo. For this post, I use it to point out the location of The Amber Light drive-in and the strange intersection of roads at that point. South Queen Street was the through road. Springwood Road and Hollywood Drive had stop signs. Due to a high number of accidents, many times ending up in Wilson’s front yard, an amber warning light was placed at that intersection; and hence the name of the drive-in. 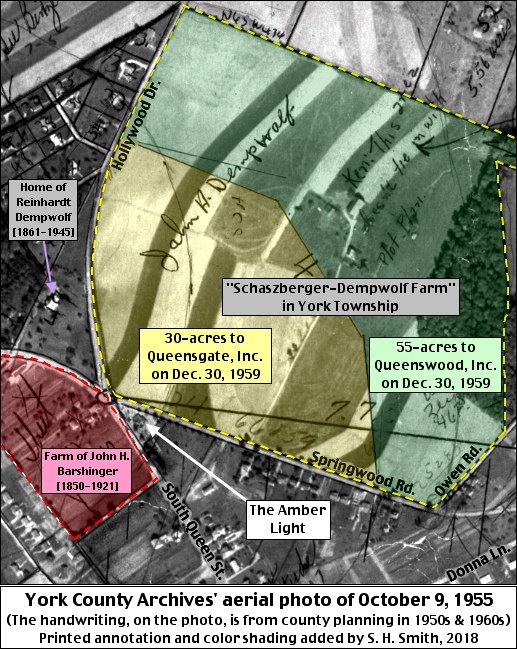 The October 9, 1955, aerial photo comes from the York County Archives. The handwriting, on the photo, is from country planning in the 1950s and 1960s. The printed annotations and color shading are mine. This photo will also be used in a future post about the “Schaszberger-Dempwolf Farm” in York Township; which has the same ownership string as the previously written about “Schaszberger-Dempwolf Farm” in Springettsbury Township.

My research indicates Joseph S. Stees was the original owner of The Amber Light drive-in and was established “shortly after the war.” About 1951, the drive-in is operated by Bob & Laura Fix under a new name; The Sun-Dial. It is later known as Kauffman’s Sun-Dial for a number of years. The drive-in is converted to Lehman’s Service Station in 1959, and remained a service station until recently. I point out the location where The Amber Light was located using the following 2017 Google aerial photo. 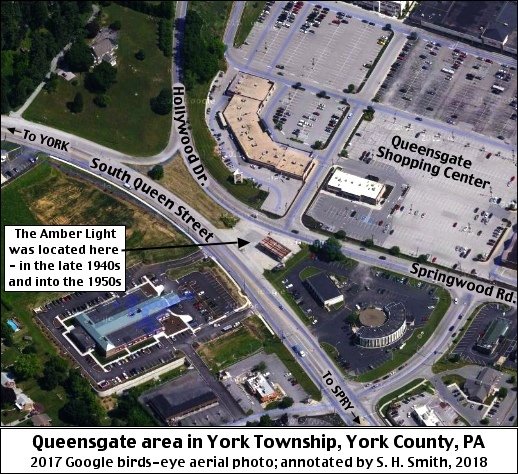