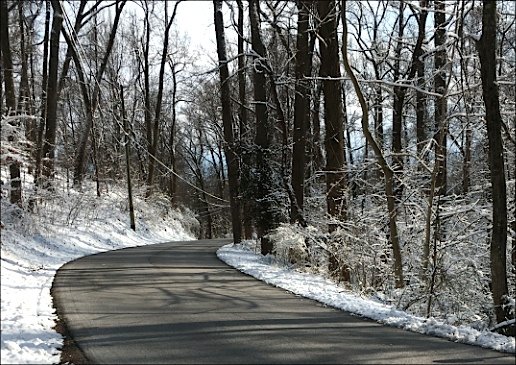 Turk Pierce, former Editorial Page Editor of The York Dispatch, walked 1.8-miles to Miller’s One-Room Schoolhouse in the York Valley; from a hilltop home, adjacent to the present Rocky Ridge Park. He shared a detailed description of that walk, which allowed illustrating the route via a historic aerial photo.

Alpine Road, Ridgewood Road, and Pineridge Road all featured significant hill climbing on the walk back home at the end of the school day. The introductory photo is a present view, looking south (i.e. downhill), on Alpine Road during a winter day.

Turk’s destination is Miller’s One-Room Schoolhouse; as shown in the following photos: 1947 interior, 1941 exterior, and 2014 exterior photo; as the present residence.

Students received an education in Miller’s Schoolhouse from about 1860 until 1952. Through, and including the 1950-1951 school year, students, spanning eight grades, were taught in this one-room. From 1935 until 1951, Erma Throne was the teacher assigned to this schoolhouse; she married Franklin Daron in 1940. During the final year as a schoolhouse, it was used for students spanning grades 1 to 6; when Lois Price was the teacher.

In 1856, a tiny 0.08-acre lot was set-aside at a “T” intersection for a school building. This lot was on the boundary between John Miller’s and John Stricker’s farms. Today that building still stands as a private home at 3565 Heindel Road.

Turk Pierce spent his early childhood in the pictured house from 1940 until 1951. This hillside farmhouse was built ca. 1870, after Capt. William Frey acquired connecting properties between 1868 and 1870. His farm totaled 49-acres and was located north of Ridgewood Road in Springettsbury Township.

After living in the house a few years, the Pierce family learned it had been used as a speakeasy during Prohibition. On the top porch was a five-pointed star made of green light bulbs. The star was turned on to let customers know the “coast was clear.” The star with the green light bulbs was initially turned on as a Christmas decoration until later learning about the real history of that star.

“In 1945 I started first grade at Miller’s School. The building still stands, as a private residence, on Heindel Road. (When I attended, Heindel Road came to a T at Concord Road. The roads have changed quite a bit.) The teacher was Erma Daron, who lived on Locust Grove Road in Stony Brook. The school had about 32 students, eight grades and no electricity or running water, just outhouses. After eight grades, students went to Hellam High School.

“On my first day, I remember wearing white shorts. As I walked down the hill, I joined other children. The first was Sylvia Wolf, who was six years older and used to baby-sit us. She was the granddaughter of Mr. And Mrs. Henry Wolf and they lived on Ridgewood Road northwest of the Alpine Road junction. The house next to theirs, east of Alpine Road, on Ore Bank Road, was home to the Hewitts. Gary was my age, Janet a year or two younger and Gladys four or five years older. East of them, up the hill, lived Marlin Miller, he was younger than me, with fiery red hair.

“At the bottom of Alpine Road was Preston (Pret) Chronister family. All younger than me, Audrey was the oldest, then Judy and at least another girl until a boy was born. In the wintertime Pret would charge people to skate on his frozen pond. Catty-corner from them was a hermit, Mr. Hauser. When he died, in the 1970s, I had a chance to go into his house and it was crammed full of junk. It has been fixed up very nicely now. A private road ran from Ridgewood Road down to Pleasant Valley Road, and on this road lived the Sterner brothers in two adjacent houses. Mike and Pat, who I think were cousins, were our playmates.

“There were people named Inners and another house on Pleasant Valley Road, which ended at Pleasant Acres Road, now called Arbor Lane, as it dead ends at Route 30. On the corner a house was built around 1950 and Bill Markey, my age, lived there with his family. We used to play in the woods across the street; these woods have been torn up for the new Pleasant Valley Road. On down Pleasant Valley Road was a family named Crowe, with children a little younger than I was; the Flinchbaughs, empty nesters; and Dietz families.

Turk’s memories will continue, following this 1955 aerial photo, in which his route to Miller’s schoolhouse is highlighted in yellow.

“Ray Dietz was my father’s boss at S. Morgan Smith and he later sold garden tractors and my father helped him with that, also. He had a machine shop behind his house, which can still be seen from Route 30. The Dietz’s son Ray, Jr., built a house just north of his parents’ for his family.

“The Bell’s house was taken for Route 30. Gloria was in eighth grade when I was in first and George was a few years older than I was. Next to them was the Rubys. Ruth Ann was my brother’s age. Then the Ferrees; Carl was my age and my best friend, but we got in trouble for breaking some windows at the Heindels’ tobacco barn. Freddie Hubley, a little younger, lived next to the Ferrees.

“Evelyn Heindel was between my brother and me and we heard recently she was killed in a horseback riding incident when she was in her 20s. She had a younger brother, I think.

“The school also drew from a couple of houses west of Mt. Zion Road. John Roth, whose father, I think, managed the Meadowbrook Farms, was my age. Also living in that area, were the Harper girls, Patsy and Mary. I was between them in age.

“The final area from which the school drew was the trailer park behind the Paddock. I remember two girls who babysat us coming from there, Vivian Witherow and Norma Jean Tew. Also a Japanese family (Tomasso?) lived there after the war, with Richard and Naomi coming to Miller’s. Lee Bowman is another trailer park boy I remember.

“The oldest boys at the school were Tommy and Clarold Ness, who lived on a farm near the school. The farmhouse still stands next to the York County Prison. Tommy was 16 and in second grade and Clarold 14 in fourth grade. Today they would be special-ed, but Mrs. Daron handled them pretty well.”

The following section of a 1956 aerial view, looks to the northeast and shows Miller’s One-Room Schoolhouse is located east of Strickler’s Farm (in lower left); along Heindel Road in Springettsbury Township. Strickler’s Farmhouse still stands at the rear entrance to the York County Prison.

Turk Pierce provided additional details, with a question. The schoolhouse was surrounded by farmer’s fields on the east and south, and by sort of a jungle to the west, along the creek. He thought Heindel Road was originally the north-south road to the T as it came from Heindel’s farm; which was originally Miller’s farm when the school was established. And later, Heindel Road was used for the east-west road to Pleasant Acres; as it is today. If anyone can confirm the road names prior to 1952, please comment.

The Hermit House of Springettsbury Township