Brenneman’s One-Room Schoolhouse in York Township was located at the northeast corner of Donna Lane (a continuation of Tyler Run Road) with South Queen Street; this is the corner presently occupied by a Wells Fargo Bank.  This schoolhouse was built between 1871 and 1876 on Abe Brenneman’s property.  It was used as a schoolhouse for at least 75-years; the last year being 1950.  The schoolhouse was torn down in the late 1950s.

A post from earlier this year, 1915 Photo at Brenneman’s One-Room Schoolhouse in York Township  contains a 1915 photo of students in front of the schoolhouse.  Shirley M. Dunkelberger attended Brenneman’s from September 1942 until May 1950.  She was in the last class to complete all eight grades in that schoolhouse. Shirley did a fantastic job recording her memories of Brenneman’s, in diagram form; which was included within the post of the 1915 photo.

In a post last August,  Schoolhouse Symbols on Maps, Part 2; and a 1921 Brenneman’s School Photo,  Ted Schaefer, Jr. supplied a 1921 photo of students beside this school.  Ted’s dad Theodore H. Schaefer Sr. and his dad’s sister Violet (Schaefer) Grove are both on that photo.  Also in the 1921 photo are my uncle Emory Barshinger and my aunt Virgie (Barshinger) Heindel.

Memories of attending this school were presented in the post Enhancing Family Histories Part 1; Brenneman’s School Memories.  Esther L. Smith, my Mom, provided some of the memories; the gaps were filled in by her sister Virgie Heindel and via a detailed note provided by one of their cousins Paul Barshinger.

All the related Brenneman’s One-Room Schoolhouse posts include:

Continue reading for more about Brennemen’s and this latest photo. 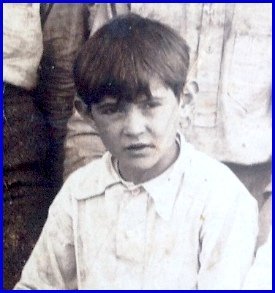 My uncle Raymond Barshinger is shown here.  The 1931 photo of his recently surfaced.  Raymond did something that I wish more people did; some time ago he wrote the names of all the students on the back of the photo.  He was able to identify every student except one; I’ve noted that student as ‘name her.’

Raymond Barshinger will be 90-years-old this Sunday.  If you happen to see him, wish him a Happy Birthday.

The student identification was made easier for Raymond, because half of the students were Barshinger relations.  Of the 35 students attending Brenneman’s School in 1931, 16 were a Barshinger.

In the following charts, I’ve sorted the students by grade.  I used U.S. Census records for ages, therefore the grades should be close; however may be off by one grade. 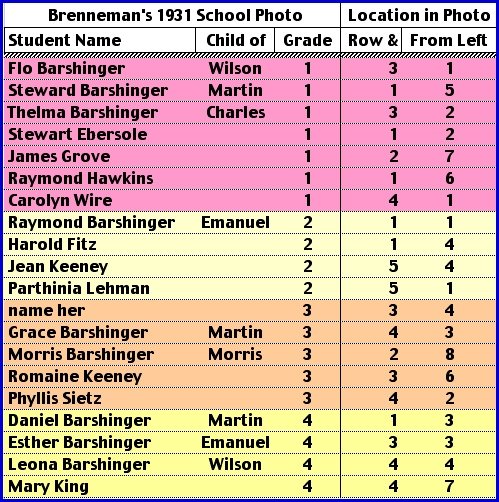 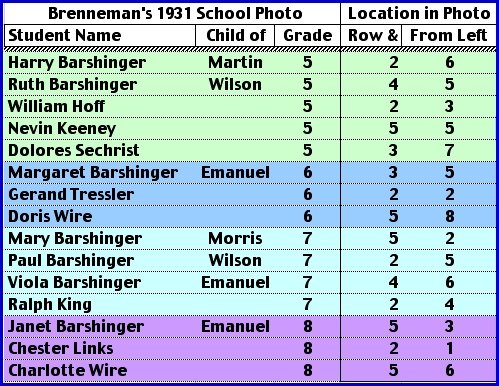