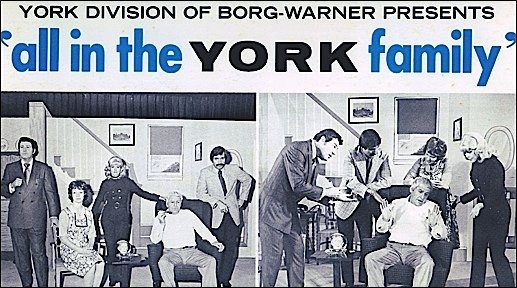 All in the family YORK Air Conditioning

I’ve zoomed-in on a section of a record album cover entitled: “York Division of Borg-Warner presents ‘all in the YORK family;’ a recording of one of those “sales musicals” performed at a destination sales meeting in Bermuda during October-November 1972. Those musicals usually played off of a Broadway play or a TV show; in this case, “All in the Family.” The 33-1/3 LP record was sent out to the YORK dealers that attended, several weeks after the meeting as a Christmas gift.

York Division of Borg-Warner conducted sales promotions such that YORK dealers meeting sales quotas were rewarded by trips with their spouses to destination sales meetings where one-time-only “sales musicals” were performed by stage and screen actors. These “sales musicals” were entertaining while also including business and sales building pointers.

In 1955, George Sprenkle, Bill Sprenkle, and my dad Harold L. Smith formed Yorkaire Cooling and Heating Sales Company; with the first day of business April 25th. My dad became the General Manager of the company and Yorkaire immediately became a commercial dealer of York Corporation products.

In 1956 Borg-Warner Corporation acquired York Corporation and instituted an incentive program whereby YORK dealers meeting sales quotas were rewarded by trips with their spouses to destination sales meetings. My Mom and Dad often went on these trips. Their favorite trip always remained the first one they went on; it was a week at Veradero Beach, Cuba in 1957.

Veradero Beach is 12-miles long at the northern-most part of Cuba. There was the occasional sales presentation and a “sales musical” however most of the trip was spent relaxing on the beach, visiting the Cuban countryside or going to shows. Every now an then, they heard gunfire between the Castro revolutionaries and Batista’s Cuban military, from distant hills.

The 1972 ‘all in the YORK family’ record album is one of a collection of YORK “sales musical” record albums that belonged to my Dad; which are now being donated to the York County History Center, upon discovering they did not have any in their collections.

Click on this LINK for a three minute sample of the ‘all in the YORK family’ music; choose the second item.

There are the full front and back covers of the album jacket:

Dorthea Alfred, standing, was primarily known as a dancer, appearing on stage and TV shows. Gil Gerard, standing right, is best known for his TV work, first in soap operas then in the role as Buck Rogers in the 1979-81 television series “Buck Rogers in the 25th Century.”

On the album jacket it notes that in Charles Braswell’s latest movie, “The Only Game in Town” he co-stars with Elizabeth Taylor and Warren Beatty. The musical numbers within ‘all in the YORK family’ are noted on the record labels:

Click on this LINK for a yorkblog.com Full View of all the original photos in this post if details are cut off in the cropping of the photos, or if any photos or links have been removed from the ydr.com site.