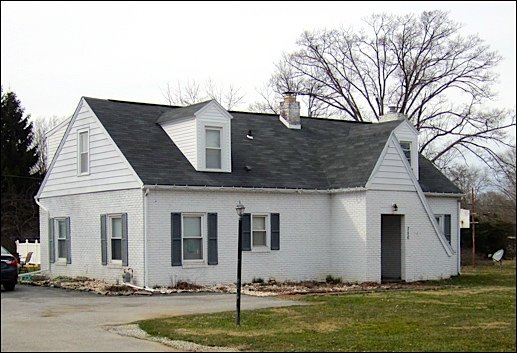 UPDATED per comments by John F. M. Wolfe at my Karl Ort presentation in 2018. The original post INCORRECTLY stated the 560 Haines Road residence, on the northwest corner of Haines Road and 7th Avenue, contained the core of 1930-1937 York Airport office building.

The CORRECT building, as pictured, is on the southwest corner of Haines Road and 7th Avenue; at 710 Haines Road. According to John F.M. Wolfe’s book “Profile of Aviation, York County, Pa. 1925-1998,” the York Airport office building, “housed the operations office of the York Airport and Pittsburgh Airways. It also contained a ticket office, passenger waiting room and a restaurant operated by Monroe King.”

Prior to writing the original post, a comment provided at one of my talks, noted the house containing the original York Airport office building, along Haines Road is for sale. I had long heard about that house being on the corner of 7th Avenue. I always thought it was the house behind a huge bush, which had always obscured getting a good comparison photo of the present home versus the photo of the airport administration building, which appears in a 1951 York Chamber of Commerce Publication.

More about the 710 Haines Road residence tie-in to the York Airport office building is in the post: Fayfield developed in Springettsbury on site of first York Airport.

After the airport closed at the Haines Road location in 1937, the large metal Aircraft Hangar was dismantled and reconstructed at Piper Aircraft in Lock Haven, Pa. For several years after the airport closed the office building became the center for a State Police drivers license exam site. The exam involved driving the usually well rutted dirt access road to the former airfield, past the building and out onto Haines Road.

John F.M. Wolfe wrote in his book: “Following the policeman’s complaints, Paul Schiding and a group of boys who had spent their leisure time at the airport doing odd jobs for free airplane rides, were given the privilege of hauling wheelbarrows of dirt on hot summer days to smooth out the roadway.”

The York County History Center’s Agricultural and Industrial Museum contains a neat model of the Haines Road airport. Paul Schiding and his cousin, Allen Bond, spent five years building the scale model right down to correctly scaled beams and wooden panels in the buildings and hangers. That model was unveiled at the museum in 2006.