Agitating for a Susquehanna Trail Celebration

Story of the Susquehanna Trail in the Good Roads Movement: Part 17 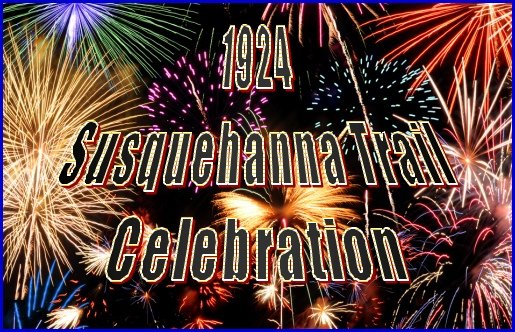 By March of 1924, the Williamsport Chamber of Commerce appeared to be successful in shifting the focus of such a celebration from Harrisburg to Williamsport. The following excerpt is from a “Williamsport In Lead For Celebration” article within the March 7th, 1924, issue of the Harrisburg Telegraph:

Williamsport is to be the center of the celebration, as its geographical center in the Susquehanna Trail system demands. A committee of the [Williamsport] Chamber of Commerce will be appointed shortly to make the necessary plans and arrangements and will be made up of the real “live wires” of the community. Tentative plans as proposed at yesterday’s meeting call for a huge historical pageant; addresses by prominent men, which will probably be broadcast by radio to every part of the country; a monster meeting, which may take the form of a banquet, barbecue or some similar form of entertainment and a number of interesting features.

I looked high and low for newspaper articles concerning such a Susquehanna Trail Celebration, however found none. The closest article, that inferred the celebration never happened, appeared in the July 30th, 1924 issue of The Wellsboro Agitator: 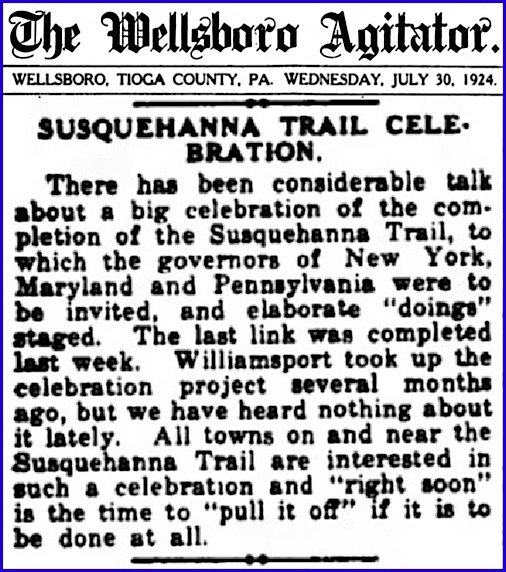 There has been considerable talk about a big celebration of the completion of the Susquehanna Trail, to which the governors of New York, Maryland and Pennsylvania were to be invited, and elaborate “doings” staged. The last link was completed last week. Williamsport took up the celebration project several months ago, but we have heard nothing about it lately. All towns on and near the Susquehanna Trail are interested in such a celebration and “right soon” is the time to “pull it off” if it is to be done at all.

If any of my readers know of such a celebration, please post a comment. Personally I think that the Williamsport Chamber of Commerce decided to forego the celebration and instead use the funds collected to flood the motoring public with promotional literature prominently featuring Williamsport as the ideal stopping point when traveling the Susquehanna Trail.