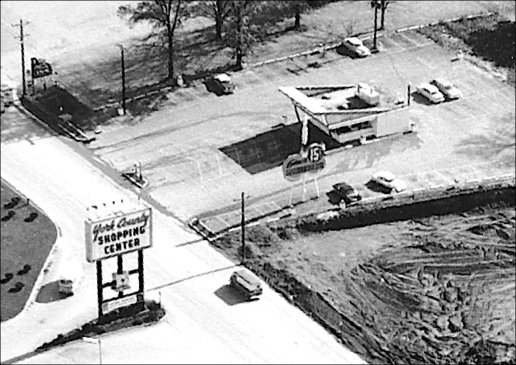 Initials were occasionally carved into groves of trees at Gino’s Drive-In, along the Lincoln Highway in Springettsbury Township. A small grove of trees was situated east of Gino’s, bordering, and within, the Lincoln Woods Inn parking lot; however a larger grove of trees was located to the south of Gino’s. The larger grove was removed when Eastern Boulevard was extended to pass behind Gino’s in the early 1970s.

Gary Wentz admitted to adding his initials, and those of the girl he was dating, to a tree in the smaller grove; during one of their frequent visits to Gino’s. Gary viewed the video containing many of J. David Allen’s aerial photos, in Collections of Springettsbury Township Historic Preservation Committee, and inquired if the collection included any photos showing the small grove of trees situated east of Gino’s.

The introductory, September 5, 1962, J. David Allen aerial photo looks southeast in Springettsbury Township, York County, PA. In the lower left is the entrance to the York County Shopping Center from the Lincoln Highway East (East Market Street). In the upper right is the original Gino’s Drive-In structure at 2500 East Market Street. At the top is the small grove of trees; which contained sets of carved initials.

At the lower right, in the September 5, 1962 aerial photo, the parking lot for Hill’s Department Store is under construction. Hill’s Grand Opening occurred two months later, on November 15, 1962.

The September 5, 1962 aerial photo shows the “circled 15-cents” on the Gino’s sign, for their 15-cent hamburgers. It was probably within days of being covered, since Gino’s acquired the franchise for Kentucky Fried Chicken in the middle-Atlantic states during the summer of 1962.

Large KFC plastic buckets were attached to the “circled 15-cents” parts of the Gino’s sign as shown in the following September 8, 1965, westward view of Gino’s Drive-In Restaurant at 2500 East Market Street.

The original Gino’s Drive-In structure at 2500 East Market Street, shown in the initial photos and ad, did not include dine-in seating. The dine-in Gino’s, at that location, was constructed in 1971. It was built to the immediate rear of the original structure.

When the dine-in Gino’s was opened, the original structure was torn down, creating additional parking spaces. That was also the time when the larger grove was removed from the south end of Gino’s lot; to make way for the dine-in restaurant, and so a rear entrance and exit to Eastern Boulevard could be established.

In response to sharing the September 5, 1962, aerial photo with Gary, he appreciated being able to point out the precise tree associated with a treasured story often told by his late wife. Within that response, Gary Wentz also shared a tale related to Gino Marchetti and made some observations in response to my post of last week: When the York Roses defeated the Ravens in Pro Football.

In looking for a photo of Gino Marchetti, during the first year he played in Baltimore, Gary Wentz observed the Baltimore Colts included two Black players during 1953; via his discovery of a team photo on a colts web site:

“Taliaferro, the first black player ever drafted by the NFL and a star for the Colts in 1953, died Monday in Mason, Ohio. He was 91. A three-time All American at Indiana, he was a 13th-round pick of the Chicago Bears in 1949 but signed instead with the Los Angeles Dons of the rival All-America Football Conference. When that league failed, a year later, Taliaferro signed with the New York Yanks, who became the Dallas Texans, who became the [Baltimore] Colts in 1953. Late in the 1953 season, George Taliaferro was pressed into duty at quarterback, he became the first black player to start at that position in the NFL.”

In the following zoomed-in section of the Baltimore Colts 1953 Team Photo, George Taliaferro is number 20 and Gino Marchetti is number 75.

“I arrived late for a team banquet [in Baltimore], and I saw this black guy sitting at a table by himself,” Marchetti said. “I said, ‘Mind if I sit here?’ He said, ‘OK.’ ”

Afterward, Taliaferro turned to the big defensive end and said, “I want to thank you.”

“For what,” Marchetti asked.

“For sitting with me,” his teammate said.

“That was George,” said Marchetti, 92, a Pro Football Hall of Famer. “He was a quiet guy who didn’t make any noise — except on the field when he got the ball.”

Pennsylvania’s first Gino’s was in Springettsbury