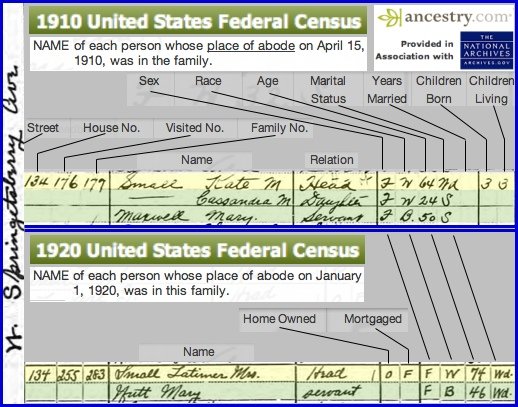 I wrote three posts about Cassandra (Small) Franklin last month concerning the 1916 plans for her country house that was to be nestled between prominent estates in the Grantley hills.  As shown in the illustration, six years prior, the 1910 Census reports Cassandra M. Small as a 24 year-old daughter, living with her widowed mother Kate M. Small and servant Mary Maxwell at 134 West Springettsbury Avenue in York, PA.

This same Cassandra M. Small discovered letters in an attic that her aunt Cassandra M. Small wrote during the Confederate Invasion of York, PA, in 1863.  Cassandra (Small) Franklin had these letters published as “Letters of ’63;” which resulted in follow-up posts earlier this month.  Here are the links to those five posts:

I previously wrote that Kate M. Small died in 1917; which is in error.  There she is in the 1920 Census, Mrs. Latimer Small with servant Mary Nutt, still at 134 West Springettsbury Avenue in York, PA.  I like to learn from my mistakes, so read on for the take-away.

I used the following condensed Small Family Tree in two of the five posts in this series.  I maintain a list of things to re-confirm and last Thursday I got around to double-checking information on Kate M. Small at the York County Heritage Trust.  Upon reviewing records at the Trust, Kate M. Small’s year of death is corrected to 1920; she died April 21st, 1920 at home, per her obituary.  Her maiden name is also corrected to Riely, from the Reilly spelling found in Prowell’s 1907 History of York County.

The original Small Family Tree was primarily based upon research at the York County Heritage Trust.  Unfortunately Kate M. Small was one of three individuals that I had not gotten around to researching when I was ready to create the Small Family Tree for the first post in the series; which forced me to rely upon other sources for Kate.  The other sources were Ancestry.com and a Google search.  The 1900 Census Records, available on Ancestry.com, indicated that Kate M. Small was born in 1845.  Ancestry.com also turned up the following match from their collection of family trees: 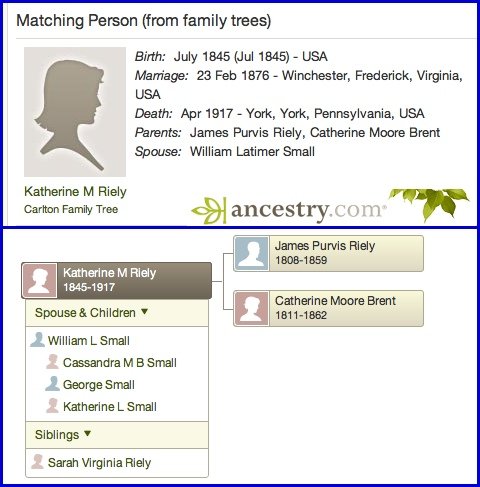 Now you see where I got the 1917 year-of-death.  I’ve seen enough errors on these family trees, that I always do additional checks via some other source; in this case a Google search.  I found one other 1917 in a genealogy forum, however also saw “born 1844, died 1920” listed in another forum.  I immediately questioned the second listing, because 1844 did not match Kate’s birth information on the 1900 Census.

I knew that the 1920 Census is based upon those living in households as of January 1st, 1920, so I did an Ancestry.com search in the 1920 Census for Kate Small, age 74 in York, PA.  I found nothing and thus concluded that Kate died before January 1, 1920.  The Ancestry.com family tree impressed me because all the surrounding details in the Ancestry.com family tree matched information previously collected at the York County Heritage Trust, thus I originally used 1917 as the year-of-death for Kate M. Small.

The take-away:  if you can’t find a married female ancestor on a Census Records search; do a Mrs. (her husband) search or just (her husband) search, even if he is dead.  In this case the 1920 Census is indexed as Latimer Small, even though he died in 1903.

The Census takers were instructed to use given names.  This is a case where instructions were not followed.  So far I have used this new take-away to find a mystery census lookup that has evaded me for several years.  Hopefully this newfound census lookup tip will allow you to break through a brick-wall in your family history research.