These buildings, on the northeast corner of North George Street and Seventh Avenue in North York, housed the largest cigar factory in York County during 1899. At #9 in the count down of the Top 50 York County Factories at End of 19th Century is Jacob A. Mayer & Brothers, located in North York. The 10th Factory Inspection Report notes that on March 23rd 1899, Jacob A. Mayer & Brothers in Cabbane has 170 employees; 100 male and 70 female. Of these 170 employees, 18 employees are under 21-years-old. The goods manufactured are recorded as “Cigars and Cigar Boxes.”

The factory inspector recorded the location as Cabbane; the then recent postal name for the village of Mayersville in Manchester Township. Four weeks after the inspector visited the Mayer factory, Mayersville incorporated as North York on April 17th 1899. 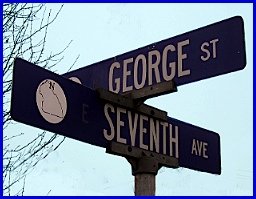 In the photo of the factory buildings, North George Street runs to the left and Seventh Avenue runs back to the right. Early in the history of Mayersville and North York, Seventh Avenue was named Liberty Street; a name in use at least through 1908.

It was Jacob A. Mayer’s father John G. Mayer who founded Mayersville. In 1887, John Mayer acquired 126-acres in Manchester Township; with much of the property located at the top of the hill, between George Street and the Codorus Creek. John Mayer sold lots and the village bore the Mayer family name.

John G. Mayer was a dealer and packer of leaf tobacco. In 1888 he completed a tobacco warehouse, the 2-story building shown at the right side in the photo, and moved his downtown York business to Mayersville. In 1889, the buildings for the business of his son, Jacob A. Mayer, were completed and Jacob made the move from downtown York; the 3-story cigar factory is shown at the left side in the photo and a 2-story cigar box factory is behind that building.

Segars by the Million

Below will be found the number of cigars manufactured by Jacob A. Mayer, in Factory 445, on South George Street, for the past thirteen months, respectively. Lancaster and other papers frequently report the manufacture of different factories, and now let them compare with the following list and see if they can beat it: 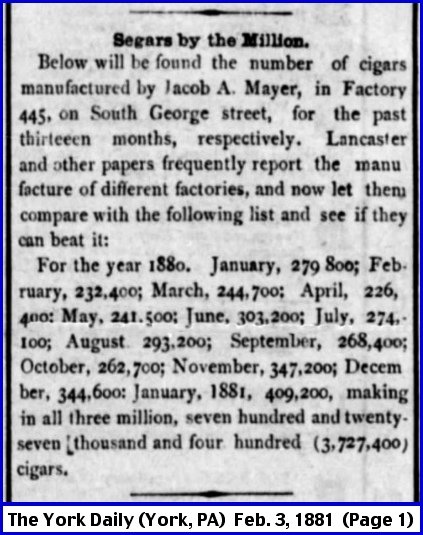 It is not generally known that York has the largest segar factory in the state of Pennsylvania. This extensive establishment is conducted by Mr. Jacob A. Mayer, son of Mr. John Mayer, dealer and packer of leaf tobacco.

The main building or headquarters of this segar factory is on the corner of George and Maple Streets, where a large brick structure has been erected for that purpose.

Thus in 1892, the name of the business became Jacob A. Mayer & Brothers. They conducted business at 1105 North George Street, in North York, for another 20-years, before closing in December, 1911. The December 18th 1911 issue of The York Daily reported:

The firm, which was one of the oldest and most prominent in the county was composed of Jacob A. Mayer, who has moved to Florida to manage an orange grove; George S. Mayer, who is engaged in the hotel business in Manchester, and Frank W. Mayer, who is proprietor of the North York Hotel.

The business was started by Jacob A. Mayer in 1874 and continued his name until 1892. The output for many years was about 6,000,000 cigars annually, employment being given to about 200 persons.

Jacob A. Mayer retired from cigar making at 55-years old, moved to Florida and purchased an extensive orange grove and fruit plantation near Orlando, known as Winter Park. Besides managing the orange grove, Jacob also operated the Mayer Candy Company, a candy and ice cream store at 134 South Orange Street in Orlando. Jacob A. Mayer died on August 2nd 1915, at 59-years of age, in Orlando, Florida.

After the Mayer Cigar Factory ceased operation at 1105 North George Street, in North York, the buildings were initially leased to Edward Felty and then to Eugene Gillespie, who continued to manufacture cigars in these buildings until about 1931. Various businesses have occupied the buildings since then. The cigar factory, along North George Street, is presently occupied by R. E. Sanders, Inc. and the tobacco warehouse, along Seventh Avenue, is presently occupied by York Tent & Awning Company.

The 10th Factory Inspection Report is for the Department’s year ending October 31st 1899. I ranked the 479 York County factories by numbers of employees; #50 has 47 employees, on up to #1 with 510 employees. In the coming weeks, I’m counting down to the top employer in York County at the end of 19th Century. At #9 in the countdown is Jacob A. Mayer & Brothers in North York; i.e. in 1899, only eight factories in all of York County provided jobs to more employees.

The Warehouse sits along Seventh Avenue. The Cigar Box manufacturing building, also containing the boiler and power plant, sits to the north of the Warehouse.

A review of my count down, thus far, of the 50 top factories in York County at the end of 19th Century follows. As a group, these 42 factories provided employment for 3,763 people in York County during 1899.