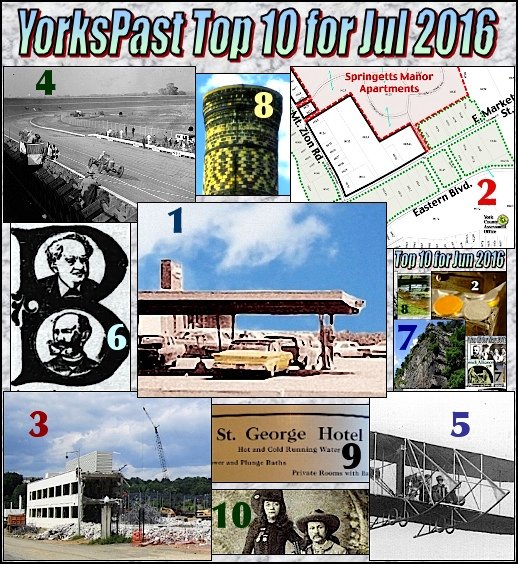 These are your favorites during July 2016:

2—Round Two of Market St. and Mt. Zion Rd. Rezoning.  Springettsbury Township had a Notice of Public Hearing, appearing on page 7B of the Monday, July 11, 2016, issue of the York Daily Record. This notice listed 66-properties, radiating from all corners of the intersection of East Market Street and Mt. Zion Road, which the Springettsbury Township Board of Supervisors propose to rezone and/or add these parcels to the town center overlay map. A resident of Springetts Manor Apartments, suggesting that I “take the cryptic list of parcel numbers and make an illustration of all the changes, then do a Blog post; so residents more clearly realize the extent of what is being proposed.” A public hearing on these changes will continue at 6:00 p.m. on Thursday August 25, 2016 at the Township Building along Mt. Zion Road. The Board of Supervisors may adopt these zoning changes at its regular meeting following the public hearing.

3—Final York NOP Walls Tumble Yesterday.  The final walls that once were part of the former York NOP (Naval Ordnance Plant) fell early in July of 2016. The factory buildings of the old Harley-Davidson plant, i.e. the former Naval Ordnance Plant, were torn down during 2012, after Harley-Davidson sold their old plant to the York County Industrial Development Authority. However the two-story, reinforced concrete, L-shaped office building, of this complex, remained standing until construction started on the Eden Road Logistics Center at the site earlier this year.

5—Earliest York Airfield in 1914 along Dover Trolley Line.  Aviator Eugene Heth vouched for the “first-rate flying field conditions with hanger” at Hilton Field along the Dover Trolley Line in York County. Heth was the pilot of a Wright Brothers Model B Flyer during several days of free flight demonstrations next to the Hilton Trolley Stop during June of 1914.

8—History Center’s Smokestack Twin.  This is Part 11 of an industrial chronicle of the buildings on the property purchased by the York County Heritage Trust, with their goal of renovating the buildings into a York County History Center. In the post 100th Birthday for the History Center Chimney  I wrote about the history of the twin smokestacks; i.e. a 188-feet high smokestack completed in December 1910 and a 182-feet high smokestack completed in July 1916, which still stands. Sam Mills submitted a color zoom-lens photo of the ornamental brickwork believed to be topping the older History Center’s Smokestack twin; i.e. the one built in 1910 and torn down about 1960.

10—York Surrenders to a Force of Two.  An 1896 article in York’s Semi-Weekly Gazette piqued my interest. Quoting the article: “It is rarely that a city surrenders to a force of two. This, however, is what York did Wednesday. The ‘two’ were cowboys of a section of Pawnee Bill’s Wild West Show wintering in Red Lion.”   Further research for this post revealed several photos of Pawnee Bill and his wife May Lillie taken by York photographers in the 1880s. 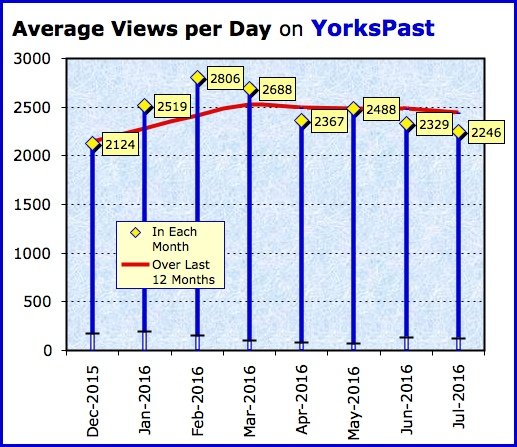