This southward looking aerial view of the York Haven Paper Mill (center) & York Haven Power Plant (lower left) is from the 1950s. The reason for locating a paper mill (and power plant) at this site can be traced to a canal, opened in 1797, to allow navigation of the Conewago Falls on the Susquehanna River. That canal was one of the earliest canals in America and it was the first working canal in the Commonwealth of Pennsylvania.

The York Haven Paper Company was established in York Haven during 1885. By 1899, it had grown to become the sixth largest factory employer in all of York County. The 10th Factory Inspection Report notes that on January 31st 1899, the York Haven Paper Company has 250 employees; 223 male and 27 female. Of these 250 employees, 47 employees are under 21-years-old, of which 2 male employees and 3 female employees were between 13 and 16 years old. The goods manufactured are recorded as “Manila & Wrapping Paper.”

The York Haven Paper Company might have never been built at this site, without prior ventures that harnessed the hydropower of the Conewago Falls immediately upriver. The infrastructure for developing the hydropower at this site goes back to the November 22, 1797, opening of a canal to navigate the Conewago Falls. George Prowell’s 1907 History of York County, PA, notes in Volume I, Pages 602-603:

One of the most notable events in the history of internal improvements in the State of Pennsylvania was the opening of a navigable canal around the Conewago Falls, on the west side of the Susquehanna River. It was the first canal built in this state, and so far as definite records go, the first in the United States.

Building the canal was a formidable task; construction costs ballooned to over five times initial estimates. The canal was about one mile long and contained two locks at the lower end, near present day York Haven; all required so that river traffic could negotiate the 19-foot drop of the Conewago Falls.

The mile long canal not only aided in navigation, but also provided a ready pool of elevated water to supply hydropower for several mills. The York Haven Company, under whose direction four large flouring mills were erected, laid out the town of York Haven in 1814. The population of the town took off after the 1885 establishment of the York Haven Paper Company, with York Haven incorporating as a borough seven years later; on December 1, 1892. George Prowell’s 1907 History of York County, PA, notes the early history of the York Haven Paper Company in Volume I, Page 936:

In 1885, the York Haven Paper Company purchased the site of the flouring mills, formerly owned by the York Haven Company, and the right of waterpower. During that year, the present paper mills were erected at a cost of $400,000. Immediately after the completion of the mill, the company began the manufacture of newspaper, which was continued until 1895. Since that date, a large amount of wrapping paper and water proof insulating paper has been made, and during the last three years roofing paper has been made on an extensive scale.

The York Haven Paper Company was incorporated January 1, 1885. In addition to building the paper mill, the company constructed a crib dam just below the Conewago Falls and widened the old canal to use as a headrace for its water turbines. The crib dam was required because the paper mill required a much bigger pool of water, compared to the pool of water required for the flouring mills. The York Haven Paper Company extracted 2,100-horsepower of hydropower, from the fall of the river water, to operate their paper mill.

At the time it was built, the York Haven Paper Company was the largest ground pulp paper mill in the United States. Between 1885 and 1895 the biggest customer for their newsprint was the New York Herald Tribune.

In 1895, the York Haven Power Company built a power plant to the riverside of the paper mill. To get the necessary water flow to the power plant, this necessitated expanding the southern part of the crib dam even further out into the river. Also by 1904, the Power Company constructed a shallow wing dam above the falls, running diagonally across the river to Three Mile Island; this provided better assurance of water levels to operate the hydro turbines. I’ve marked up the following 2015 Aerial Photo; pointing out the locations of the dams, paper mill and power plant.

For more on the York Haven Paper Company, continue reading.

The 10th Factory Inspection Report is for the Department’s year ending October 31st 1899. I ranked the 479 York County factories by numbers of employees; #50 has 47 employees, on up to #1 with 510 employees. In the coming weeks, I’m counting down to the top employer in York County at the end of 19th Century. At #6 in the countdown is the York Haven Paper Company in York Haven; i.e. in 1899, only five factories in all of York County provided jobs to more employees.

The headrace, labeled Basin, is in the path of the lower end of the historic 1797 canal. The canal was widened by the York Haven Paper Company to get sufficient water flow to the five turbine water wheels powering the paper mill. There were four turbine water wheels powering the ground wood mill; having a capacity of 350-horsepower each. The beater wheel was powered by a single turbine water wheel having a capacity of 700-horsepower. In this mill, the manufacture of the raw material, wood, into pulp and preparing it for the paper machines was entirely dependent upon waterpower.

The production flow in the York Haven Paper Mill was northward; the wood entered the mill at the south end and the finished paper completed at the north end. In 1899, when the paper mill was producing manila & wrapping paper, production averaged 57 tons of paper every 24 hours. The following 1919 ad for the York Haven Paper Company is from the June 18, 1919, issue of PAPER, a Weekly Technical Journal for Paper and Pulp Mills. 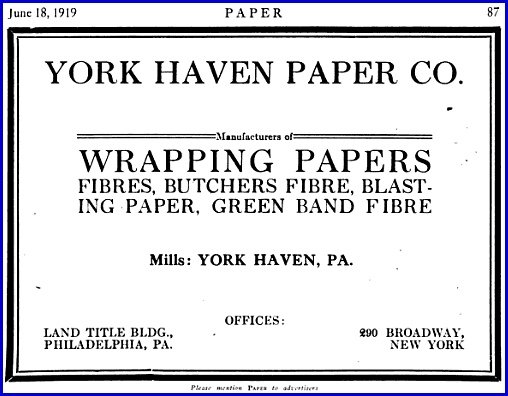 A review of my count down, thus far, of the 50 top factories in York County at the end of 19th Century follows. As a group, these 45 factories provided employment for 4,410 people in York County during 1899.