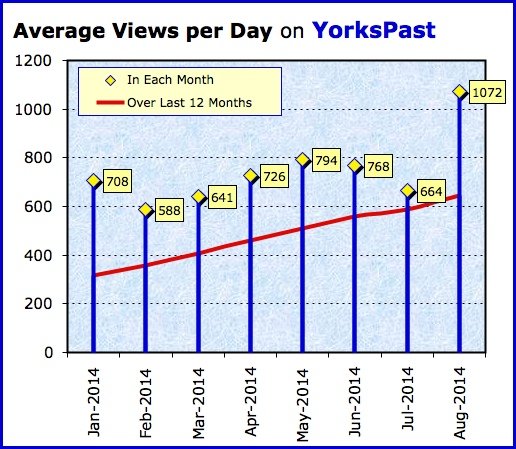 YorksPast started with a post on July 26, 2012. Two years and nearly two months later, this marks my 500th post of sharing a hodgepodge of explorations of York’s Past. I’ve learned a lot, via my research, for those posts; I hope my readers enjoyed what I’ve shared along the way.

This chart shows the growth of YorksPast readership in recent months; thanks to my ever-growing legion of loyal readers! August was a breakout month of over 1000 views per day, after floating between 600 and 800 views per day during the earlier months of 2014. A big part the increase was due to the overwhelming popularity of my series of posts on the Susquehanna Trail in the Good Roads Movement; a series that is continuing on Friday’s for several more weeks.

At the beginning of every month, I’m sharing with my readers the top 10 posts from the previous month. You’re continuing to catch up on reading the past installments of my historical novel, that I post every Thursday; 29 of the top 50 post views were installments of Railcar Gold. These are your favorites during August 2014:

Story of the Susquehanna Trail in the Good Roads Movement

Bury’s in Springettsbury Township was not just Hamburgers

West of Playland Skating Rink, at 2709, 2710 and 2720 East Market Street, Bury’s had various businesses in Springettsbury Township. Only one of those locations housed Bury’s Famous Hamburgers; learn about the other Bury businesses.

The Wellsboro Agitator campaigns for the Susquehanna Trail

An 1880 engraving likely depicts the type of perilous voyage the York Collegiate students encountered when they hitched a ride on a Susquehanna River lumber raft in 1883.

The Susquehanna Trail lands York, PA at the Crossroads of PA Routes 1 & 4

Pennsylvania Routes 1 & 4 crossed in York’s Continental Square until the “modern” state route numbering system was implemented throughout the states. PA Route 1 became Route 30 and PA Route 4 became Route 111 over all but the Harrisburg to Sunbury part of the Susquehanna Trail, which became Route 11.

In 1899, the Wrightsville Hardware Company had been manufacturing hardware and iron novelties for 19-years.  The #15, in the post headline, signifies that in the year 1899, there were only fourteen companies containing a work force of more employees in all of York County.

Adventures in a South Seas Paradise

At Palmyra Island lines were fastened around the old PT-boat wharf’s aging bollards, however it became quickly evident that they were unfit to hold the ship.  Hastily the crew wrapped lines around a couple of nearby palm trees, which held.

In early August, I shared this top 10 list; i.e. the posts with the most page views from my loyal readers, during July 2014.