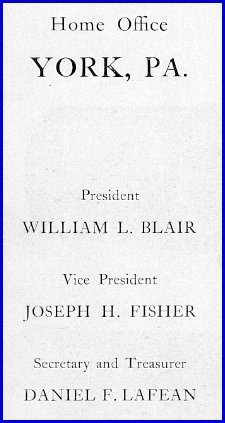 An American Caramel Company ad included photos of their three plants in 1904. This photo shows their York Plant, located on the northwest corner of Broad and Walnut Streets in York. In 1904, American Caramel’s other plants were located in Lancaster and Philadelphia.

The American Caramel Company in York has direct links to Hershey’s Chocolate and to Graybill’s; the wholesale electrical distributor, located on Broad Street in York. The earliest origins of this confectionery company go back to 1867, when Peter C. Wiest started making caramels in York.

By 1899, the York Plant of the American Caramel Company had grown to become the fifth largest factory employer in all of York County. The 10th Factory Inspection Report notes that on March 13th 1899, the American Caramel Company has 250 employees; 50 male and 200 female. Of these 250 employees, 120 employees are under 21-years-old, of which 2 male employees and 16 female employees were between 13 and 16 years old. The goods manufactured are recorded as “Confectionery.”

The American Caramel Company grew out of an industry established by Peter C. Wiest in 1867. He was a pioneer in the manufacture of caramels and was successful in his efforts and soon developed a large business. In 1878, Daniel F. Lafean became a partner and the firm of P. C. Wiest & Company was organized. The original proprietor retired from the business and in 1895 The P. C. Wiest Company was incorporated with Daniel F. Lafean as president. 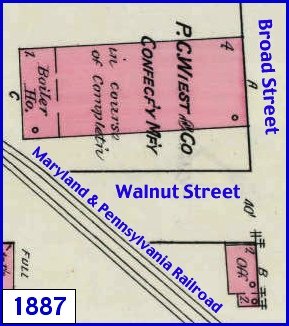 Directories of York, have the early confectionery business of P. C. Wiest & Company being conducted at 14 North George Street in York. Business was good; because an 1887 Sanborn Fire Insurance Map of York, shows P. C. Wiest & Company is in the course of completing a four-story confectionery factory on the northwest corner of Broad and Walnut Streets in York; with their two-story offices on the southwest corner of these same streets. This Sanborn map section is from Penn State Libraries on-line digital collection of older Sanborn Fire Insurance Maps.

Single Order for 100 Tons of Caramels

R. G. Weston, of London, England, a representative of Powell Brothers & Company, of London and Liverpool, a corporation having 150 stores in England and other parts of Europe, was in this city for several hours yesterday during which time he placed an order for 100 tons of caramel and other candy with the York Plant of the American Caramel Company.

June of 1905 was the same month that Milton Hershey opened his Chocolate Factory in Dauphin County. One can only imagine Mr. Hershey thinking, after hearing about the 100-ton order, if he made the right move, in getting out of the caramel business in favor of chocolate making. History proves Hershey made the right choice.

Continue reading for the further history of the York Plant of the American Caramel Company; from Baseball Cards to Graybill’s.

The 10th Factory Inspection Report is for the Department’s year ending October 31st 1899. I ranked the 479 York County factories by numbers of employees; #50 has 47 employees, on up to #1 with 510 employees. In the coming weeks, I’m counting down to the top employer in York County at the end of 19th Century. At #5 in the countdown is the American Caramel Company in York; i.e. in 1899, only four factories in all of York County provided jobs to more employees. 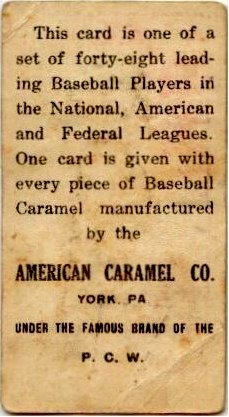 The American Caramel Company was one of the early issuers of Baseball Cards with their product. As noted on the back of a 1915 card: “This card is one of a set of forty-eight leading Baseball Players in the National, American and Federal Leagues. One card is given with every piece of Baseball Caramel manufactured by the American Caramel Co., York, PA.” The front of each card contained a photo of a baseball player; with their name, position and team noted in the lower margin. The size of the 1915 cards were 1.5-inches by 2.75-inches.

The American Caramel Company shut down the York Plant in December 1928; with the candy making machinery moving to a more modern facility. It was reported that peak employment at the plant had reached 400 workers in the early 1920s.

The plant on the northwest corner of Broad and Walnut Streets in York remained vacant for a number of years. In 1933, with the repeal of Prohibition, it was announced that The Yorktown Breweries planned to open a beer brewery in the building, however such a listing never shows up in City Directories; therefore the brewery likely never materialized.

The plant housed the R. B. Lloyd Tobacco Company from the late 1930s to late 1940s. In the early 1950s, the F. A. Burrows Manufacturing Company operated out of the plant; they made steam heating equipment.

Most Yorkers remember this plant housing Graybill’s; the wholesale electrical distributor. Prior to moving to 200 North Broad Street, during 1954, Graybill’s conducted business at 135-137 East Philadelphia Street in York. The following photo of Graybill’s is from the 1960s; it is from the same viewpoint as the 1904 American Caramel Company photo, at the beginning of this post.

The central part of Graybill’s goes back to the four-story caramel factory built in 1887. The building sat vacant for years until a heavy snowstorm in February 2007 partially collapsed the roof. The 120-year old building was demolished soon afterwards.

A review of my count down, thus far, of the 50 top factories in York County at the end of 19th Century follows. As a group, these 46 factories provided employment for 4,660 people in York County during 1899.