I discovered some photographs earlier this month at the York County Heritage Trust.  The sequence of photos illustrate things that I heard over the years from some of my Uncles and my Dad about the 1950s planning hearings for the first 4-Lane Interstate Highway through York County; now known as I-83.

By the time my Uncles and my Dad attended the planning hearings in 1957, the decision had been made to route the 4-lane interstate as a bypass around the east side of the City of York; i.e. where it is located today.  However the planners still occasionally talked about an original plan for the interstate to run directly through downtown York by following the Codorus Creek and Tyler Run; a route that I have indicated by blue and yellow colored lines on this September 5, 1957 aerial photo.

In the lower left part of this aerial photo, that puts a 4-lane interstate running right through the present York College campus.  However the college did not exercise an option to purchase the former 9-hole golf course until March 15, 1957; i.e. after the decision was made not to go with the city expressway route.

Continue reading as I run through a sequence of five photos related to the I-83 planning hearings and the 4-lane interstate planned through Downtown York.

I remember being told about the following chart with the big question mark.  The interstate was being completed from Harrisburg to the south and from Baltimore to the north, while planners were still perplexed on where to place the expressway in or around York. 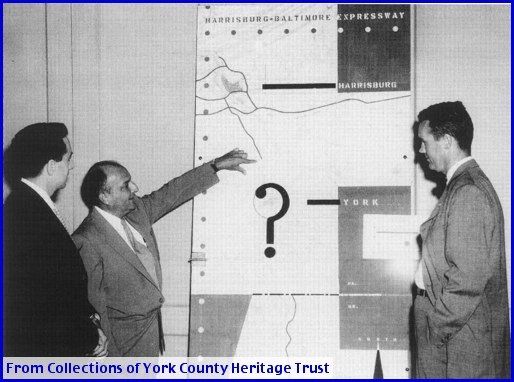 This is a wider view of the September 5, 1957 aerial photo.  The top left shows that the expressway has already been constructed northward from the North George Street interchange.

As in the lead aerial photo, I’ve placed the blue and yellow colored lines to indicate the prior discussed expressway route through Downtown York.  I-83 symbols have been placed, where by the end of 1957, construction will start on the bypass, around the east side of York.

The lower section of the aerial photo shows what is now known as Business I-83 running from the former dead-mans curve, i.e. where the bypass joined the main expressway, northward to the vicinity of the York Hospital.  On an enlarged view, one can see that grading has been done for this section as of the September 5, 1957 aerial photo date.  If you want to see an enlarged view of this whole aerial photo, a large printed and framed copy is hanging in the transportation wing of the Agricultural & Industrial Museum.

The following photo is directly from the York County Heritage Trust.  The white line is on the original photo used during the 1950s planning hearings.  The white line is the path of the northern part of the expressway route along the Codorus Creek into the City of York; to the point where a George Street humpback bridge would pass over the 4-lanes near the bottom of the photo.  This part of the city expressway is indicated by blue on the September 5, 1957 aerial photos. 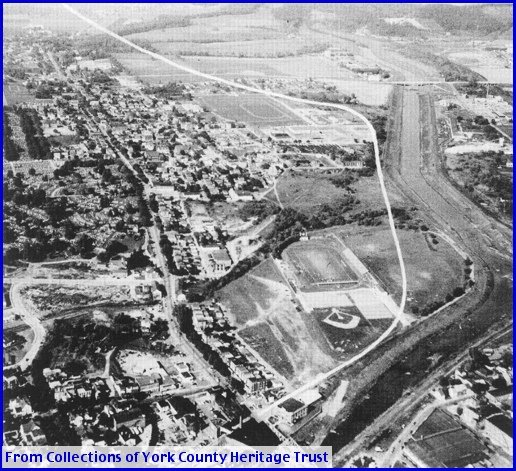 I got the biggest surprise looking through the York County Heritage Trust photos, related to the planning hearings for the expressway, when I discovered the following photo. 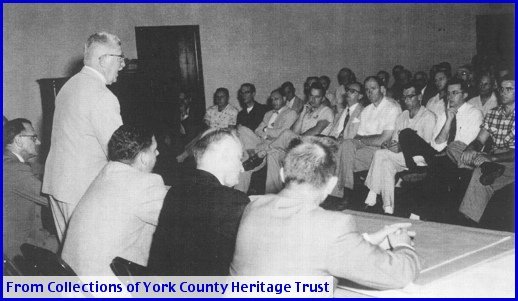 As shown in the following enlargement, from RIGHT to LEFT in the front row on the photo are: my Uncle Raymond Barshinger, my father Harold L. Smith and my Uncle Emory Barshinger. 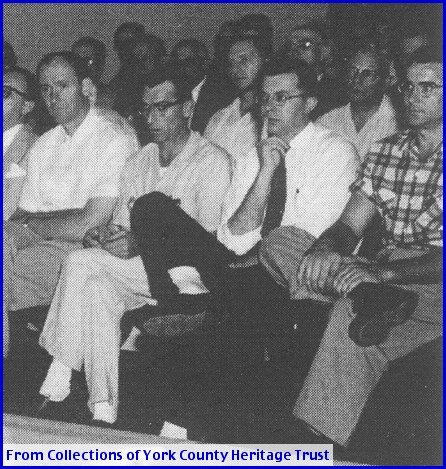