I’ve shaded one of the buildings green on a section of Plate 14 from the 1903 Atlas of York.  That building marks the location of the George A. Kohler & Company Cigar Factory in York.  In about 1906, this factory becomes the Merchants Cigar Company.

The George A. Kohler & Company Cigar Factory in York is at #34 in the countdown of the Top 50 York County Factories at the end of 19th Century.  The earliest that this cigar factory shows up in Polk’s York City Directory is during 1898: G. A. Kohler & Co., Cigar Manufacturers, located on the northwest corner of Howard and Newton Avenues in York.  From the same directory, the owner G. A. Kohler resides in Yoe, York County, PA.

George Prowell’s 1907 History of York County, PA contains information that George A. Kohler was in the cigar business in Yoe, prior to the establishment of his cigar factory in York.  The following quote is from the biographical information on Cornelius S. Snyder; Volume II, Page 739:

When [Cornelius S. Snyder was] about eighteen years of age [about 1892], he entered upon an apprenticeship at the factory of the Kohler Cigar Company, at Yoe, where he became an expert workman and a competent judge of stock, also learning all details of the practical business, including the packing of cigars.

In 1896 he became associated with Messrs. George A. and Adam W. Kohler in the same line, under the firm name of the Kohler-Snyder Cigar Company, with headquarters in the borough of Yoe.  In 1898 A. W. Kohler retired from the concern, and in 1900 G. A. Kohler also withdrew.  Mr. Snyder assuming entire control in the latter year, since which time he has individually carried forward the enterprise. … The business is still conducted [as of 1907] under the title of the Kohler-Snyder Cigar Company.

Thus there is an overlap of three years (1898, 1899 and 1900) where George A. Kohler is involved in cigar businesses in Yoe and York.  After 1900, he concentrates solely on running his factory in York; which, at the time, was one of the largest cigar factories in York County.

I obtained this Merchants Cigar Company letterhead several years ago due to a personal connection.  My grandfather Emanuel Barshinger likely worked at this factory.

Census records list the occupation of my grandfather, Emanuel Barshinger, as a either a cigar maker or a farmer.  He was actually both a cigar maker and a farmer for much of his working life.  Emanuel raised produce and was in the chicken and egg business on his farm in York Township.

The Emanuel Barshinger farm was located where I-83 now crosses South Queen Street.  He sold many of his farm goods at his stand (#367) at the City Market in York (shaded blue in the 1903 Atlas).  However the majority of his eggs were sold through New Jersey egg dealers, who in turn sold them to New York Restaurants.  In the 1940s, Emanuel produced 50 to 60 dozen eggs a week.

To jog Moms memory, I put together a list of cigar factories within a block of City Market.  Mom picked Merchants Cigar Company out immediately, she remembered hearing that name; as the cigar company where her father worked the majority of his working life. 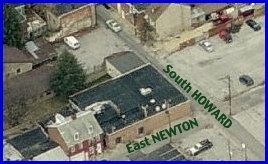 This 2013 Bing.com Birds Eye View shows that a building still occupies the northwest corner of Newton & Howard Avenues in York today.  This building is likely from the Merchants Cigar Company era; i.e. an expansion onto the original George A. Kohler & Company Cigar Factory shown on the 1903 Atlas.

In my count down of the 50 top factories in York County at the end of 19th Century, there are 12 cigar related factories represented.  Only one cigar factory shows up in the top 15; do any of my readers care to guess where this factory, that made cigars and also cigar boxes, was located in York County—I’ve already had readers guess, Dover, Red Lion & Dallastown; which are not the correct answer in 1899.

#34 George A. Kohler & Company Cigar Factory in York, with 74 employees, is the ninth cigar related factory in my count down of the top 50 York County Factories at end of 19th Century.  Previous cigar factories that have made the list include: