At #33 in the count down of the Top 50 York County Factories at End of 19th Century is the Hanover Silk Company in Hanover.  An 1898 directory of Hanover has the Hanover Silk Company located at the corner of Ridge Avenue and Walnut Street in Hanover.  After the company was acquired by Ernest & Herman Levy, they expanded the Silk Mill; as seen in the ca 1918 photo at the beginning of this post.

George Prowell’s 1907 History of York County has this to say about the Hanover Silk Company on page 833 of Volume I (T. J. O’Neill in the following paragraph is Thomas J. O’Neill per a 1904 directory):

Hanover Silk Company was organized as a limited partnership in 1892 by Vincent O’Bold, George D. Gitt and T. J. O’Neill.  A three-story building, 120 x 60 feet, was erected in the eastern part of Hanover and fitted up with 45 looms for the manufacture of silk ribbon.  This is the only silk mill in York County, engaged exclusively in the manufacture of ribbon.  In 1904 the business was incorporated with George D. Gitt president and T. J. O’Neill, secretary and treasurer.  About 100 hands are employed.

Thomas J. O’Neill was the biggest shareholder in the Hanover Silk Company.  When O’Neill went bankrupt, that likely forced the sale of the company.  Ernest & Herman Levy must have liked what they saw, and added this factory to their bevy of silk mills. 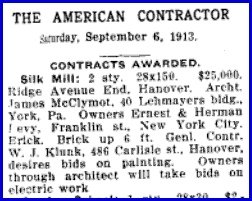 In 1879 the brothers Ernest & Herman Levy decided their future lay in the manufacture of silk ribbons.  They established their company in New York City and progressively expanded by the acquisition of strategic silk mills around the country. 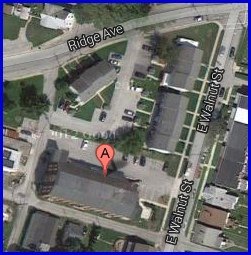 This 2013 Google Aerial View Map marks the portion of the Silk Mill (Marker A) that still stands in Hanover.  This former Silk Mill has been developed by Woodland Development Incorporated.  They have converted the factory into 10 modern two-bedroom “loft style” apartments.  The address is 534 East Walnut Street in Hanover, Pennsylvania.

A review of my count down, thus far, of the 50 top factories in York County at the end of 19th Century follows.  As a group, these 18 factories provided employment for 1,063 people in York County during 1899.