The Ways and Means Committee of the Second Session, Fifty-Fourth Congress of the United States held hearings on Cotton Embroideries Tariffs.  The Congressional Record of 1896 shows testimony was given by Mr. P. F. Stoner; representing his company, the Columbia Embroidery Company of Wrightsville, PA.  In this testimony on December 29, 1896, Mr. Stoner stated, “We started the manufacturer of these goods when we were under the McKinley tariff, and we had a protection, as you know, of 60 per cent on the manufactured goods and 40 per cent on the bobbinet, which forms the foundation of our curtain.”  Mr. Stoner was making a case for maintaining, or potentially increasing the tariff when he stated the following:

Embroidered goods, especially curtains made by the Bonnaz embroidery machines, are made chiefly in Switzerland, but also in Belgium, France, and elsewhere.  The cost of labor, which is a very large percentage of the cost of these goods, is very low, running from 15 cents a day for the small help to about 25 to 30 cents for skilled operators, where similar labor in this country commands 49 cents or so a day for the small help, and from 60 cents to $1 or more a day for skilled operators.  Under these circumstances even 60 per cent ad valorem is not sufficient to enable this industry to be built up to large proportions in this country.

The 1898 R. L. Polk & Company Directory for York City & County indicates the Columbia Embroidery Company in Wrightsville has $30,000 in capital.  Paul F. Stoner is President; thus we now have the first name of the Mr. P. F. Stoner testifying before Congress in 1896.  Patrick J. McNally is Secretary and Superintendent.  Watson R. Reisinger is Treasurer.

The 10th Factory Inspection Report notes that on March 1st 1899 the Columbia Embroidery Works in Wrightsville has 80 employees; 15 male and 65 female.  Of these 80 employees, 59 are under 21-years-old; of which 10 females are between 13 and 16-years-old.  The goods manufactured are recorded as “lace curtains, etc.” 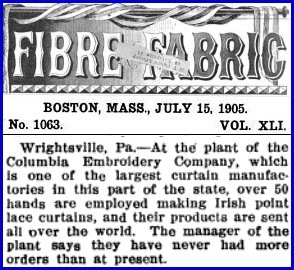 I’ve tried to include mentions about local companies in trade journals of the time.  This July 15th 1905 article about the Columbia Embroidery Company in Wrightsville is included in “Fibre Fabric,” a trade journal of the American Textile Industries.  The article states that Wrightsville’s Columbia Embroidery Company is one of the largest curtain manufactories in this part of the state and their products are sent all over the world.  However with the number of employees down to 50, compared to 80 employees in 1899, the manager was exaggerating when he stated, “[we] have never had more orders than at present.”

It [the Wrightsville Star; a local Wrightsville newspaper] is owned by the Columbia Embroidery Company, an industrial establishment, engaged in the manufacturer of fine lace curtains, of which Robert S. Magee is president, and W. W. Drenning, superintendent.

George Prowell’s 1907 History of York County has this to say about the Columbia Embroidery Company within the biography of Robert S. Magee on page 469 of Volume II:

In 1896 the Columbia Embroidery Company was moved to Wrightsville, and Mr. [Robert S.] Magee purchased stock in the establishment, serving in the capacitor of secretary and treasurer until 1900.  In association with Grant S. Tinsley he then purchased the entire stock of the company, and they have continued under the same name up to the present time.

Based upon the 1898 R. L. Polk & Company Directory listing, evidently Robert S. Magee did not begin to serve in the capacitor of secretary and treasurer until later in 1898 or in 1899.

A review of my count down, thus far, of the 50 top factories in York County at the end of 19th Century follows.  As a group, these 19 factories provided employment for 1,143 people in York County during 1899.