In 1882, at twenty-two years old, Milton D. Martin went into the carriage making business with his father Hiram Martin in York. In terms of present addressing, the small startup Carriage Factory of H. Martin & Son initially existed at 319 North George Street for about four years before moving into a bigger factory at 240 North George Street. While at the later site in 1888, the partnership with his father failed due to financial difficulties; whereupon Milton went off on his own to establish the immensely successful Martin Carriage Works.

In 1897 the new four-story factory, on a six-acre site was up and running, with the entire production moved to West York. The 52-54 North George Street location was retained as sales offices and the 24-26-28 North George Street location was used for vehicle storage. The West York factory was soon producing up to 20,000 vehicles annually. South Highland Avenue, the Railroad and West Market Street essentially bounded this Martin Carriage Works site in West York. The following Birdseye View looks southward; with the factory in the background and the two-story office, located at 1330 West Market Street, in the foreground.

By 1899, the Martin Carriage Works in West York had grown to become the third largest factory employer in all of York County. The 10th Factory Inspection Report notes that on June 1st 1899, the Martin Carriage Works has 279 employees; 275 male and 4 female. Of these 279 employees, 50 employees are under 21-years-old, of which 8 male employees were between 13 and 16 years old. The goods manufactured are recorded as “Carriages.” 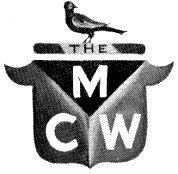 The Martin Carriage Works was incorporated on June 1, 1900; with Milton D. Martin as President and Peter A. Elsesser as Secretery-Treasurer. The MCW logo for “Martin Carriage Works” appeared in catalogs and ads. I assume the bird at the top is either a house martin or purple martin.

Martin Carriage Works initially dabbled in horseless carriages in 1908. At the outset they were marketed as Motor Wagons. However, rapidly greater emphasis was put into these motorized vehicles. Martin trucks gained publicity by showing at national auto shows as early as 1909. Additional notoriety was gained with successes in reliability runs. Martin trucks were becoming such an important part of the business that upon the 1912 death of Milton D. Martin, his death notice in the trade journal Motor Age, issue of January 9, 1913, reported:

Continue reading to see how the Martin Carriage Works evolved following the death of its founder.

The 10th Factory Inspection Report is for the Department’s year ending October 31st 1899. I ranked the 479 York County factories by numbers of employees; #50 has 47 employees, on up to #1 with 510 employees. In the coming weeks, I’m counting down to the top employer in York County at the end of 19th Century. At #3 in the countdown is the Martin Carriage Works in West York; i.e. in 1899, only two factories in all of York County provided jobs to more employees.

Milton D. Martin left his estate in trust to his wife Martha. After Mrs. Martin died October 3, 1915, Milton’s bequest of $125,000 for the building of a public library was released. Martha’s death also released an additional $60,000 for the public library. However this was not enough money, at that time, to build and stock a library, so the money was invested to accumulate more funds.

In 1920, the lot at the corner of East Market and North Queen Streets was purchased where the Martin Library now stands. Local architect Frederick G. Dempwolf designed the Colonial-style library, which began construction in 1934 and opened in 1935.

Due to the death of Milton D. Martin, management changes were made on January 17, 1913, to fill vacancies at the Martin Carriage Works. John J. Landes, the brother of Mrs. Martha Martin, replaced Milton on the Board of Directors. Milton’s long-time right-hand-man, Peter A. Elsesser was elected President; he had been with the company 21-years. Filling the other offices were George W. Hall, Vice President; John J. Landes, Treasurer; and John C. Ort, Secretary.

Under Peter A. Elsesser’s leadership, the Martin truck line continued to evolve while maintaining their reputation of producing reliable trucks. The design and development work on the Atlas 3/4-Ton light delivery commercial truck was well underway when Mrs. Martha Martin died and the Martin Estate was put up for sale.

In 1916, there came forth a purchaser for the major asset of the Martin Estate. The Yorker Frederick S. Small teamed up with a New York financier John Jay Watson to purchase the Martin Carriage Works. They named their company Martin Truck & Body Corporation, since they did not intend to produce the carriage line any longer.

The Martin Truck & Body Corporation produced vehicle bodies however the prime focus was on producing Atlas 3/4-Ton Commercial Trucks. These trucks had a common chassis with 33 body variations. Ads in 1917 have the standard wheelbase as 106-inches, however by mid-1918, the standard wheelbase had been increased to 118-inches. A 4-cylinder, 50-horsepower motor was utilized in all models. The Lycoming Foundry and Machine Company in Williamsport, PA, produced the motors.

All tires were Lee 31 x 4 Standard for a good reason. John Jay Watson was President of the Lee Rubber & Tire Company. The wheels were wood, artillery type, second-growth hickory, with 1-1/4-inch spokes.

I have several ads for the Atlas 3/4-Ton Commercial Trucks; most are two-page spreads. The following figure contains the major illustrations in a 1918 Automotive Trade Journal ad. This figure shows two of the 33 body styles; one is a Delivery Truck painted for the local Bon-Ton.

In 1919, the Martin Truck & Body Corporation purchased the Parry Manufacturing Company in Indianapolis, Indiana; the merged companies taking on the name Martin-Parry Corporation. The York Plant continued to focus on truck production and the Indianapolis Plant focused on producing vehicle bodies.

The Martin-Parry York Plant produced Atlas Trucks into 1924; thereafter the plant produced the Martin-Parry steel partitions. These were not ordinary partitions; they met strict standards set up by the Bureau of Marine Inspection and Navigation. The same partitions were also sold for use in land buildings, contributing to some of the first large scale prefabricated buildings in the United States. Martin-Parry was able to keep partition costs down by utilizing assembly line production techniques perfected while building trucks.

In the build up to World War II, the York Plant developed and produced an artillery gun carriage adapter, which allowed The United States War Department to motorize some of its older field artillery. In a six-month period prior to the United States entry into WWII, the York Plant of Martin-Parry shipped more than $3,000,000 worth of this adapter. Thereafter they received orders for this adapter from many of America’s Allies and played a major part in The York Plan during the war.

Following the war, the headlines were not so good in the December 9, 1946, issue of The Gazette and Daily:

Martin-Parry To Move To Toledo

The Martin-Parry Corporation, which employs about 800 here, will move from West York to Toledo, Ohio, possibly within the next two months, Charles McFall, sales manager for the marine division of the corporation, said last evening.

Recently much of the former West York factory, originated as the Martin Carriage Works in 1897 and vacated by the Martin-Parry Corporation in 1947, was converted into the Carriage Works Apartments. The 118-year-old, four-story structure houses 80 apartments at 50 South Highland Avenue.

A review of my count down, thus far, of the 50 top factories in York County at the end of 19th Century follows. As a group, these 48 factories provided employment for 5,198 people in York County during 1899.