At #28 in the count down of the Top 50 York County Factories at End of 19th Century is the York Safe & Lock Company in Spring Garden Township.  When I purchased the above drawing it was labeled “about 1900?”  I have not found anything to dispute that year; however, if anything, it is a few years on the positive side of 1900.

This drawing of the York Safe & Lock Company factory is a view looking southeast (I’ll show this circa 1900 plant as white-dotted lines on an aerial view later in this post).  The 1899 York City Directory lists the address for this company as Loucks Mill Road and Northern Central Railway.  Loucks Mill Road is in front of the plant (running from the bottom to the right edge) and the Northern Central Railway tracks are directly in back of the plant.

Eliot Ness cracks the York Safe & Lock Company has been the most viewed post since starting YorksPast.  As far as readership, it was in the top 3 for six straight months after it was posted last November.  Now nine months later it is still hanging in at number 6, per the August readership figures.  A post written nine months ago, achieving the sixth highest hits, only in August, is pretty good!

Continue reading in this post for the early history of the company.

The 10th Factory Inspection Report notes that on June 1st 1899 the York Safe & Lock Company has 89 employees; all male.  Of these 89 employees, 6 are between 21 and 16-years-old.  The goods manufactured are recorded as “Safes.” 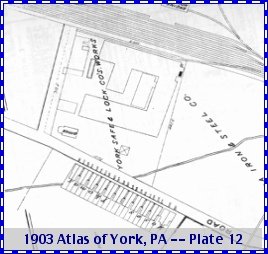 The 1903 Atlas of York, PA shows the York Safe & Lock Company Works along Loucks Mill Road (running from left edge to bottom right).  The building shapes within the 1903 Atlas are consistent with circa 1900 drawing of the factory.

In The Story of a Dynamic Community, York, PA, published in 1946, it is noted that the “York Safe and Lock Company was established in 1882 with a very modest brick factory building erected on Loucks Mill Road, paralleling the tracks of the Pennsylvania Railroad Company, Northern Central Division, and just outside the city limits.”  This first modest factory was entirely destroyed by fire in 1894 and rebuilt on the larger scale depicted in the drawing at the beginning of this post.

George Prowell’s 1907 History of York County has this to say about The York Safe and Lock Company on page 760 of Volume I:

The York Safe and Lock Company, of which Israel Laucks is president; S. Forry Laucks, vice president, treasurer and general manager, and J. A. Dempwolf, secretary, is one of the prominent industries of the city.  It was founded in 1882 when the company engaged in the manufacturer of small safes for offices.  Business increased and a few years after the origin of the works, the company began to make bank and safe deposit vaults.  The factory was entirely destroyed by fire in 1894, and was soon after rebuilt on a much larger scale, and since that time a large number of safes have found ready sale, not only in America, but in foreign countries.  The York Safe and Lock Company has supplied bank vaults for some of the largest financial institutions in the United States.  When the company was first organized, it employed about twenty men.  In 1907, 400 workmen were on the pay roll. 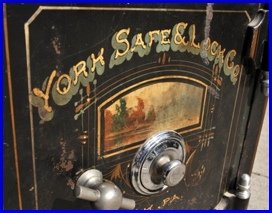 I was curious how Israel Laucks got into the safe making business; what were his prior businesses?  John Gibson’s 1886 History of York County provides more insight that George Prowell’s 1907 History of York County.  The following quote is primarily from Biographical Sketches in Gibson, pages 29-30; however details from Prowell Volume II, pages 52-53, are interjected within square brackets:

Israel Laucks, of the leading firm of Laucks & Son, dealers in dry goods and notions, was born in [West Manchester Township] York County, on September [6], 1827, and is the son of George and Elizabeth (Smyser) Laucks.  He remained at home with his father on the farm until he was twenty years of age, in the meantime attended the common schools.  At the age of twenty he came to York and entered the York High School.  After finishing his studies he formed a co-partnership with S. K. Myers, and engaged in the boot and shoe, dry goods and notion business at York [located on Market Street, east of the Square].  This partnership was dissolved by mutual consent, and Mr. Laucks formed a partnership with his son, George W. Laucks, December 31, 1883, under the firm style of Laucks & Son, dealers in dry goods and notions.  They have a large stock and do a thriving business.  Mr. Laucks was married May 4, 1854, to Imilda A., daughter of William A. and Lyda Wilt, of York.  To this union were born six children, as follows: Irene E., George W., Amanda L., Grace V., Sadie M. and S. Forry.  Mr. Laucks has been director of the First National Bank of York; treasurer of the Farmers’ Market Company, and is president of the York Coach Company, also president of the York Safe and Lock Company.  He has been an active member of the Reformed Church for more than thirty-seven years, and was elected to the office of deacon, and subsequently elder in the church of his choice.

[Israel Laucks became a stockholder in the York Safe & Lock Company, of which he was one of the organizers in 1882.  The original capital stock represented was but twenty-five thousand dollars, but this was soon increased to fifty thousand, while later the capitalistic investment was placed at one hundred thousand dollars.  The growth of the enterprise was phenomenally rapid and substantial, and the administrative control was from the start largely in the hands of Mr. Laucks, who was made president of the company, with his son, S. Forry Laucks, as general manager, and another son, George W., as sales agent.]

George Prowell’s 1907 History of York County has this to say about S. Forry Laucks’ association with the York Safe & Lock Company on pages 53-54 of Volume II:

S. Forry Laucks first connection with the York Safe & Lock Company was in 1887, when he became a clerk, and, so intelligent and faithful were his services, in 1891 he was made general manager of the concern, later being honored with the important offices of vice-president and treasurer, in addition to that of general manager.

Much of this success unquestionably has been due to the excellent management of S. Forry Laucks, who is justly regarded as one of the prominent figures in the manufacturing world of York.

The following aerial photo is a view looking east.  I’ve used WHITE dotted lines to indicate the extent and location of the circa 1900 York Safe & Lock Company plant.

A review of my count down, thus far, of the 50 top factories in York County at the end of 19th Century follows.  As a group, these 23 factories provided employment for 1,484 people in York County during 1899.