#21 Billmeyer & Small Company in York; and their Susquehanna Steam Saw Mills in Wrightsville

At #21 in the count down of the Top 50 York County Factories at End of 19th Century is Billmeyer & Small Company in York.  Billmeyer & Small Company was still producing a few railcars and had a nice railcar spare parts business, although by 1899, the company had essentially reverted to lumber manufacturing.  Adjacent to the York Car Works was the Billmeyer & Small Lumber Department in York; where customers could continue to buy raw lumber or processed lumber, such as: sashes, doors, shutters, blinds and frames; as they had for over 50 years. 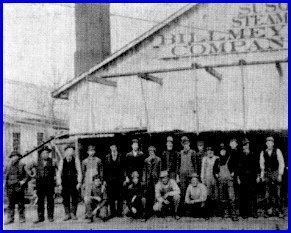 The raw lumber was manufactured from logs floated down from northern Pennsylvania in river rafts to the Billmeyer & Small Company’s Susquehanna Steam Saw Mills in Wrightsville.  The above 1894 Bird’s Eye View of Wrightsville shows the extent of their Saw Mills and Lumber Yards between Front Street and the Canal; stretching all the way from Orange Street to Lemon Street.  The undated photo, to the right, of the Billmeyer and Small sawmill and employees in Wrightsville is from the book Stained Glass Windows of The First Presbyterian Church of York by Charles E. Letocha; the photo is courtesy of Charles Heim.

The 10th Factory Inspection Report notes that on June 26th 1899 Billmeyer & Small Company in York has 100 employees; all male.  Of these 100 employees, all are over 21-years old.  The goods manufactured are recorded as “Sash, doors & blinds.”

This company has its beginnings solely in the lumber business.  In 1847, local building contractor Henry Small established the business with his sons David E. Small and John H. Small.  This business operated as H. Small & Sons; the establishment consisted of a lumber business on Duke Street, near North Street, in York and a planing mill at Wrightsville.

In 1852, son David E. Small partnered with Charles Billmeyer, a railcar builder from one of the two already established railcar-manufacturing firms in town, to form Billmeyer & Small; the third car builder in York.  At the time, all railcars were of wooden construction, so this was a nice complimentary business to H. Small & Sons.

During 1856, the three (rail)car builders in York were producing approximately:

Car building saw significant growth and dominated Billmeyer & Smalls’ business over the next 35-years.  However throughout this time period, their lumber department continued to sell raw lumber and processed lumber, such as: sashes, doors, shutters, blinds and frames.

Company co-founder Charles Billmeyer died in 1875.  The company incorporated as Billmeyer & Small Company in 1876.  Charles’ son George S. Billmeyer was promoted within the company at that time.

By 1879, the York Car Works of Billmeyer & Small Co. extended over an entire city block between Duke and Queen Streets adjacent to the railroad on North Street.  In 1881 Billmeyer & Small Co. built an additional factory along the 500 block of East Market Street; the buildings extended back a block to Philadelphia Street.  To meet demand, this new factory was constructed to utilize an assembly line; i.e. methods that would be pioneered by Henry Ford over a quarter of a century later.

Billmeyer & Small Co. reached a peak employment of nearly 700 in the early 1880s, from which the business steadily declined to about 200 employees in the next ten years.  This decline was the result of narrow gauge railways suddenly loosing favor and the appearance of steel railcars in ever increasing numbers.  Billmeyer & Small Company dabbled in building wooden railway streetcars, however in the long run this venture did not pan out.

For some reason Billmeyer & Small Co. choose not to manufacture steel railcars; possibly because of their heavy ties to lumber manufacturing.  I’ve seen speculation that if co-founder David E. Small had not died in 1883, he would have been bold enough to make the switch to steel railcar manufacturing.  Based upon things I’ve read about David Small, I’d agree with that supposition.  And so in 1899, the company is down to 100 employees in York; although this still made them the 21st biggest manufacturer in York County.  This is one of their newspaper ads from 1901: 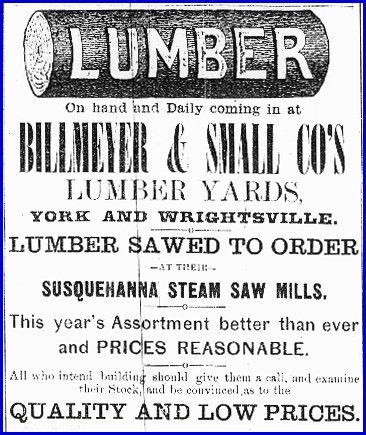 Billmeyer & Small built their last passenger railcar in 1895 and their last freight car in 1902.  The President of the company, and last Small family member associated with the firm, died in 1902; he was John H. Small, the brother of co-founder David E. Small.  From that date onward, Billmeyer & Small Company was solely in Billmeyer family hands.  The following billing letterhead is from the early 1900s:

The Billmeyer & Small Company’s spare parts and lumber business must have been good during the declining years of railcar manufacturing.  George S. Billmeyer became partners in merchant, clothier and stone quarry businesses during this time.  George also partnered with his brother-in-law, J. E. Baker, to purchase a quarry and lime-kiln in the northern part of Wrightsville in 1889.  They named their company the “Wrightsville Lime Company.”

So what happened to the Billmeyer & Small Company plant sites?  The plant along the 500 block of East Market Street was closed in 1897, with operations consolidated at the York Car Works.  One of the last uses of the eastern parts of this building along East Market Street was to house the Holiday Movie Theatre.  Run-away freight cars in the 1970s derailed and did significant damage to the building; it was torn down shortly thereafter.

About one-half of the York Car Works, between Duke and Queen Streets, was destroyed in a massive fire on July 4th, 1909.  Buildings that survived continued to be used for Billmeyer & Small’s lumber business for at least another 8 years.  After Billmeyer & Small Company went out of business, one of the buildings became a train-mans bunk-house operated by the Pennsylvania Railroad.  When this building was torn down in 1930, my Grandfather, Luther S. Smith, recycled the material to build a bungalow along the Susquehanna River near Accomac.  Luther S. Smith, had previously worked for Billmeyer & Small Company during 1901 and 1902; before Luther started full-time employment with the Pennsylvania Railroad.

A review of my count down, thus far, of the 50 top factories in York County at the end of 19th Century follows.  As a group, these 30 factories provided employment for 2,157 people in York County during 1899.