The illustration comes from a 1901 York Manufacturing Company catalog. This catalog was the first item in my collection of York County factory memorabilia. See the post Steve Jobs & Apple Computer connections to YORK for the story of how I obtained this catalog.

When the Factory Inspector visited York Manufacturing Company in 1899, the factory on Roosevelt Avenue was barely 3-years old. From only 50 employees prior to hiring Thomas Shipley in 1897, the company went through a ten-fold expansion of their workforce in only two years. 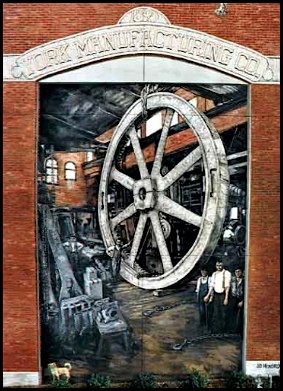 Drive into the City of York on Roosevelt Avenue; after crossing the railroad tracks, look to your right. Those are some of the buildings remaining from the York Manufacturing Company. With a closer look, you’ll see this 35-foot-tall mural painted on the side of one of the buildings.

The mural, painted in 1995 by J. Dan Hendrix, depicts the flywheel of a 600-ton ice-making machine produced circa 1900 inside this York Manufacturing Company factory. A plaque next to the mural notes, “Founded in 1895, the York Manufacturing Company produced ice-making machinery on this site until the late 1950’s when it moved to its present Richland Avenue location. It continues to make refrigeration equipment and is now known as York International Corporation.”

The plaque is misleading. The York Manufacturing Company was founded in 1874 in a small factory on the northwest corner of North Penn Street and West Clarke Avenue. The construction of their factory along Roosevelt Avenue was started in July 1895 and completed in July 1896. The plaque, more appropriately, should have begun, “In this 1895 factory …”

This southward looking Bing.com Bird’s Eye view shows the locations of two factories of the York Manufacturing Company. The factory, when the company was founded in 1874, sat on about one-quarter of the present Roosevelt Tavern parking lot. I’ve pointed out the sidewall location of the mural on the 1895 factory along Roosevelt Avenue.

In 1874 six men in York, Pennsylvania, contributed resources to jointly form the York Manufacturing Company.  Stephen Morgan Smith contributed two washing machine patents valued at $20,000; since it was an already established product.  Oliver J. Bollinger held a patent on a turbine water wheel.  Bollinger shared the rights to his invention with three investors; George H. Buck, Robert L. Shetter and Henry H. LaMotte.  As a group, Bollinger, Buck, Shetter and LaMotte contributed the Bollinger Turbine Water Wheel patent for a $4,500 stake.  Jacob Loucks invested $10,000 in cash.  Henry H. LaMotte also gave the new company the use of a machine shop he owned on North Penn Street in York for an additional $7,000 stake in the company.

The Turbine Water Wheel patented by Oliver J. Bollinger on June 28, 1870, was likely developed at LaMotte’s machine shop on the northwest corner of North Penn Street and West Clarke Avenue in York, PA.  By 1873, it appears that Bollinger was gearing up to launch the business O. J. Bollinger & Company, headquartered in LaMotte’s factory building; this is per information recorded in 1873 by Howard H. Bailey.

O. J. Bollinger & Company was probably still in need of funds to successfully launch their company within this factory building.  S. Morgan Smith wanted a factory to make his already successful washing machines and Jacob Loucks had funds that he wanted to invest in a business.  It was doubtless a matter of mutual interests for Smith, Loucks and Bollinger, with his investors, to join forces and become the key people in establishing the York Manufacturing Company on September 7, 1874.

Stephen Morgan Smith was selected the first President of the York Manufacturing Company.  Jacob Loucks was elected secretary.  Oliver J. Bollinger became the company’s first mechanical engineer.  By the end of 1874, the company had 14 employees; with each man working about 60 hours a week.  The initial products offered were the Success Washing Machine & Wringer, the Bollinger Turbine Water Wheel plus a corn planter and cultivator.

These portraits are of the six individuals that are key to the story of the York Manufacturing Company. I’ve already introduced you to: Jacob Loucks, S. Morgan Smith and Oliver J. Bollinger. 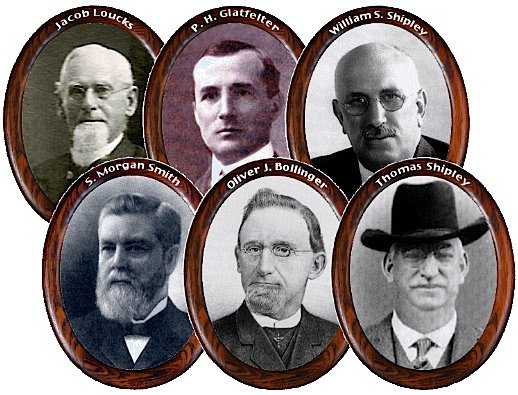 Stephen M. Smith retained the rights to a November 3, 1874 U.S. Patent for Improvement in Clothes-Wringers and contracted with the York Manufacturing Company to produce it.  Oliver J. Bollinger retained the rights to a June 1st 1875 U.S. Patent for Improvements to his Turbine Water Wheel, however decided to resign from the company shortly thereafter, also taking along his three investors, and go into business on his own.

When Oliver Bollinger left the company, this original 1870 Turbine Water Wheel became an orphan at the York Manufacturing Company; with little prospects for future sales by going up against Bollinger’s improved turbine.  S. Morgan Smith stepped in and took charge of this product. Throughout 1876, S. Morgan Smith worked on improving the Turbine Water Wheel and applied for a patent on those improvements.  From those efforts, Stephen M. Smith was issued his first Turbine Water Wheel patent on December 26, 1876 and contracted with the York Manufacturing Company to produce it.

S. Morgan Smith’s interest in the turbine water wheel continued to grow, so much so that he turned over the office of President to Jacob Loucks in 1878. In 1880, Smith resigned from the York Manufacturing Company to go into business for himself; this after receiving a second Turbine Water Wheel U.S. Patent on December 30, 1879.

Within six years of being established, all except one of the original six founders of the York Manufacturing Company left to start their own companies. Jacob Loucks was the sole remaining founder; however was responsible for getting the company into the ice making business; selling their first machine in 1885. This turned out to be an expensive move that nearly bankrupt both the company and Jacob Loucks; however it was a necessary move, otherwise YORK Air Conditioning may have never happened. Philip H. Glatfelter provided the helping hand to his brother-in-law by personally paying off all debts and taking control of the York Manufacturing Company in 1888.

Until 1927, the helm of the York Manufacturing Company continued in the hands Philip H. Glatfelter, his son William and nephews George W. S. Loucks and Bird H. Loucks. P. H. Glatfelter made the decision to fund a major expansion by building the 1895 factory along Roosevelt Avenue. However P. H. Glatfelter’s hiring of Thomas Shipley as General Manager in 1897 was the move that precipitated the huge growth in the York Manufacturing Company.

Thomas Shipley, was an engineering graduate of Cooper Institute of New York, as was his younger brother William S. Shipley; who would join the company in 1900. Thomas’ simple design of a Standard YORK Refrigeration Compressor proved to be a superior performing machine that immediately propelled sales and causing the company to go through a ten-fold expansion of their workforce in only two years. It is said that P. H. Gratfelter gave Tom Shipley a free hand in all aspects of running the business.

Continue reading to see how the York Manufacturing Company evolved into the maker of YORK Air Conditioning.

The 10th Factory Inspection Report is for the Department’s year ending October 31st 1899. I ranked the 479 York County factories by numbers of employees; #50 has 47 employees, on up to #1 with 510 employees. In the coming weeks, I’m counting down to the top employer in York County at the end of 19th Century. At #2 in the countdown is the York Manufacturing Company in York; a company that would quickly take over as the top York County factory employer and hold that position well into the twentieth century.

After P. H. Glatfelter died in 1907, his son William L. Glatfelter become president of the York Manufacturing Company. The company was still growing; by 1917, York Manufacturing Company had 50% of the U.S. Ice Making Machinery Business. Remember, back then, almost everything relied upon blocks of ice for refrigeration; everything from transporting meats and perishables to household ice boxes, the forerunner of household refrigerators.

The 19-acre site along Roosevelt Avenue was built out, so in 1923 an 80-acre site was purchased along Grantley Road in Spring Garden Township. The first building at the Granley Plant opened in September 1925 to make Ice Cans. The Gate House was completed in 1926, in fact look closely at the Granley Gate today, one sees “1926 York Manufacturing Company” in stone. Many remember these two plants referred to as “The Yorks.” Here is a timeline for the company name changes associated with “The Yorks.”

Thomas Shipley is named President of the company in 1927. Tom consolidates all manufacturing, sales and construction entities into the single York Ice Machinery Corporation; Ice Making Machinery is still the core business.

Thomas Shipley died in 1930. Shipley Boulevard through the middle of the Grantley Plant was named in his honor.

William S. Shipley becomes President of the company. William Shipley is known for his leadership in the “York Plan” during WWII, however he also provided astute leadership during the company’s transition from Ice Making to Air Conditioning in the 1930s.

This classic York Ice Machinery Corporation ad is from 1937; touting YORK is about ready to install the world’s largest cooling system for air conditioning purposes. In 1930s ads, YORK bills itself as “Headquarters for Mechanical Cooling since 1885,” a reference to the year York Manufacturing Company manufactured and installed their first Ice Making Machine.

Check out these links for various related posts about The Yorks:

A review of my count down, thus far, of the 50 top factories in York County at the end of 19th Century follows. As a group, these 49 factories provided employment for 5,705 people in York County during 1899.