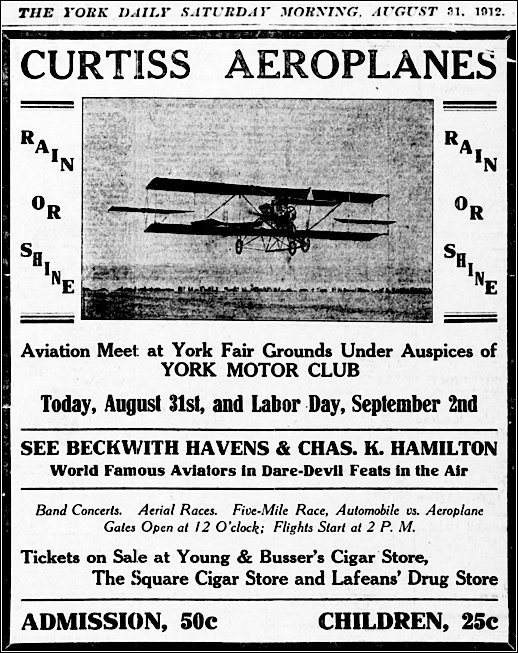 One of the features, each day of the two-day aviation meet, was a five-mile race, aeroplane versus automobile. By 1912, the Aeroplanes of Glenn Curtiss were on par with the Aeroplanes of the Wright Brothers. A Curtiss Biplane raced against a York-built car; the Kline-Kar. One might wonder why the race was not against the more established York-made car; a Pullman Automobile. In all likelihood, the following indirect connection between Curtiss and Kline-Kar was responsible for the paring.

In 1902, Glenn Curtiss, of Hammondsport, New York, had his first dealings with a small foundry and woodworking shop run by John Kirkham in nearby Bath, New York, when he required some motor parts cast to his design. These were castings for Curtiss’ initial motorcycle engine, of his own design. So began an interesting business relationship between Glenn Curtiss and John Kirkham; Curtiss learning intricacies about casting lightweight motors and Kirkham learned motor design.

In 1904, Curtiss produced his first aviation engine; by modifying his lightweight, 5-horsepower motorcycle engine for use on a dirigible. Curtiss soon discovered aviation engines were much more profitable than motorcycles, although he continued producing motorcycles until 1917. Glenn Curtiss utilized Kirkham for his motors through 1905, before relying on his own factory and bigger suppliers.

About this time John Kirkham’s son Charles is given control of Kirkham Motor Manufacturing Company. The motor designs of Charles Kirkham achieved some of the highest power to weight ratios in the country. The company continued to primarily produce motorcycle engines, however in 1910 they began producing an aviation engine of their own design. In 1913, Charles Kirkham started Kirkham Aeroplane and Motor Company and in 1915, he went to work for Curtiss Aeroplane as Chief Motor Engineer.

Samuel Baily and James Kline were the individuals responsible for the earliest success of the York Motor Car Company, maker of Pullman Automobiles in York, PA. In early 1909 new outside financial backers in the York Motor Car Company eased Baily and Kline out of the company. Almost immediately Samuel E. Baily and Joseph C. Carrell partnered with James A. Kline to form the rival B.C.K. Motor Company in York, PA; and the car they produced was proclaimed the Kline-Kar. 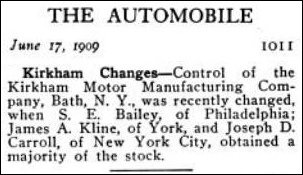 The trade journal, “The Automobile,” reported in their June 17, 1909, issue that the B.C.K. Motor Company purchased the majority of the stock in the Kirkham Motor Manufacturing Company; thus giving the start-up Kline-Kar instant access to cutting-edge motor technology. The initial Kline-Kar motors likely resulted from a collaborative design between Jimmy Kline and Charles Kirkham. It would be neat, if one could have sat in on such a design meeting between these innovators.

The trade journal, “American Machinist,” reported in their March 10, 1910, issue that the Kirkham Motor Manufacturing Company is enlarging their factory. Kirkham was busy producing motorcycle engines, Kline-Kar motors and was beginning to produce aeroplane engines that again broke new ground in power to weight ratio. Curtiss Aeroplane again became a customer of Kirkham. It is possible the 1912 aviation meet, at the York Fairgrounds, was pitting a Curtiss Biplane with Kirkham motor versus a Kline-Kar with Kirkham motor; especially since the majority interest in Kirkham Motor Manufacturing Company was owned by a York based business, B.C.K. Motor Company.

This is the first in a series of posts about the 1912 Aviation Meet, at the York Fairgrounds; related posts are: