This 1921 Lincoln Highway map segment shows the general location of the Club House of the York Motor Club.  Noted in small print, the location is a little over two-miles east of York on the north side of the Lincoln Highway.

The Lincoln Highway, conceived in 1913, was America’s first coast-to-coast highway.  During 1913, many city streets were paved but most rural roads were still dirt.  The Lincoln Highway Association was formed with a plan to link already paved roads by improving strategic dirt roads throughout the country.  The association engaged more in planning and fund-raising than in actual road construction.

The first real test of how much progress was being made on the Lincoln Highway came in 1919.  The U.S. War Department wanted to know how the country’s roads would handle emergency military convoy movements.  A convoy of 80 military vehicles set out from Washington, D.C. on July 7, 1919.  They traveled to Frederick, Maryland, and then headed north.  At Gettysburg, the convoy made a left turn and made its way west via the Lincoln Highway to San Francisco.

The convoy contended with getting stuck in rutted or muddy roads, bridges collapsing and vehicles braking down.  In remote regions, the Lincoln Highway was not well marked.  Soldiers mounted Harley-Davidsons and rode ahead of the convoy to scout out the route and conditions.  Sixty-two days after leaving Washington, D.C. the convoy reached San Francisco.

A longer range result of the 1919 Transcontinental Motor Convoy over the Lincoln Highway was the Interstate Highway System we have today.  One of the army observers that traveled with the 1919 Convoy was 28-year-old Lt. Col. Dwight D. Eisenhower.  When Eisenhower became President of the United States, passage of an Interstate Highway Act became one of his priorities.

Continue reading for more about the York Motor Club and where the Club House was located.

The Committee on Permanent Quarters was charged with finding a permanent Club House.  Several sites and buildings were rejected, however when the possibility of acquiring the John Laing residence along the Wrightsville Turnpike came before the membership on April 29, 1912, this choice met with unanimous approval.  York Motor Club details come from the collections of the York County Heritage Trust.

The first meeting of the York Motor Club in their Club House occurred July 2, 1912.  Many will recognize this building along East Market Street in Springettsbury Township.  The Colonial Revival building with massive wrap-around porch is located between North Findlay Street and North Vernon Street; it looks virtually the same as it did 100-years ago in this circa 1913 postcard. 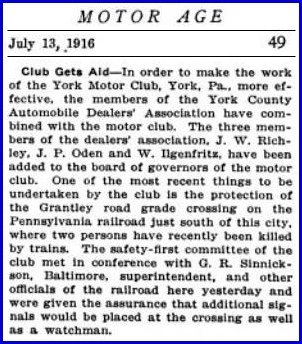 I’m sure the activities of the York Motor Club show up in local newspapers, however here is a mention in a national magazine Motor Age, in 1916:  “Club Gets Aid—In order to make the work of the York Motor Club, York, Pa., more effective, the members of the York County Automobile Dealers’ Association have combined with the motor club.  The three members of the dealers’ association, J. W. Richley, J. P. Oden and W. Ilgenfritz, have been added to the board of governors of the motor club.”

“One of the most recent things to be undertaken by the club is the protection of the Grantley road grade crossing on the Pennsylvania railroad just south of this city, where two persons have recently been killed by trains.  The safety-first committee of the club met in conference with G. R. Sinnickson, Baltimore, superintendent, and other officials of the railroad here yesterday and were given the assurance that additional signals would be placed at the crossing as well as a watchman.”

Check back Monday when I look at the 1906 Charter Members of the York Motor Club.