At the left side of this illustration, using Shearer’s 1860 Map of York County, I’ve pointed out, and marked, ten 1860 buildings in the Pleasureville region within what is now Springettsbury Township. For this post, I utilized a map different from previous posts; one that did not have as much fold-wear. At the right side of the illustration is a 1937 aerial photo of the same region.

This is the 24th post in a series where I match 1860 dwellings, identified on Shearer’s 1860 Map of York County, to the families resided in them; utilizing the 1860 United States Census. This was another challenging set of ten dwellings; since most of the dwellings were not labeled, on the 1860 map, in this highest population density section of Pleasureville.

Zooming in on the Aerial View of Pleasureville

Shearer’s 1860 Map of York County  contains the owner/occupant of most buildings; for example (w77) is Z. Miller. Additional information on Z. Miller can be found by consulting the 1860 Census of the United States, in conjunction with other sources; where one discovers this is Zachariah Miller, a 32-year-old, Master Mason, with $1,200 in real estate holdings. 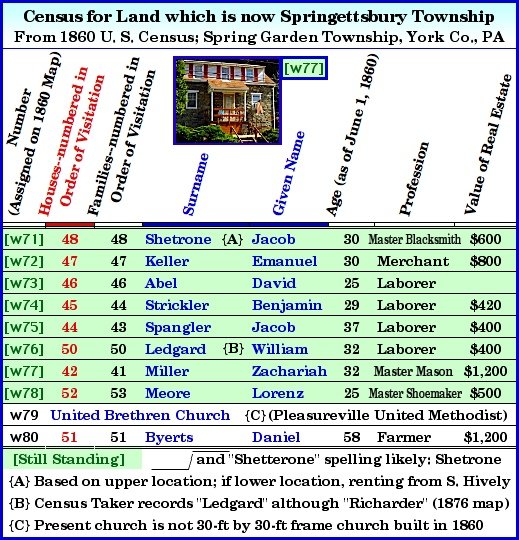 It is suspected that some or all of the 1860 structures are contained within eight of the buildings at these addresses:

The first sentence of Emanuel Keller’s obituary notes he conducted a general store in Pleasureville for a period of 52-years; from 1858 until 1910. That store is marked [w72] on the segment of Shearer’s 1860 Map of York County. E. G. Keller lived to an age of 86-years, 8-months and 6-days.

Emanuel G. Keller was born, during 1829, in York Township to John and Catharina (Goodling) Keller and was baptized at Blymire’s Union Church. After a decade of teaching in York Township schools, Emanuel’s first mercantile experience was in conducting a store in New Paradise, now Jacobus, from 1856 to 1858. In 1857 Emanuel married Julia Ann Catharine Snyder in Springfield Township; they had one child, Rolandus E. Keller. It appears Julia died shortly after childbirth and the 1860 Census indicates Rolandus is living with his grandparents, John and Sarah Snyder, in Springfield Township.

In 1858, Emanuel sells his store in New Paradise and establishes a store in Pleasureville. In 1859, Emanuel Keller married Malinda Jane Billet, the daughter of Daniel and Eliza Billet; who operate a farm [w22] just north of Pleasureville.

Emanuel’s obituary notes he was one of the founders and leading members of the local United Brethren Church. In 1860, that church building was built at location [w79]; initially consisting of a 30-ft. by 30-ft. frame structure. Emanuel’s store flourished and he established a Pleasureville cigar factory with his son Rolandus; E. G. Keller & Son. At Emanuel Keller’s death, his estate file shows him owning many properties in Pleasureville, plus 134-acres of surrounding farms.

The Pleasureville area received a post office on November 28, 1891. The postal name was Springet and Emanuel Keller was the its first postmaster. George Prowell’s 1907 History of York County, PA notes on page 1073 of Volume 1; quoting:

In recent years Springett has shown evidences of prosperity. There are at present (i.e. 1907) several cigar factories doing a large business. The village has a fine two-story school building and a commodious hall for secret societies and public meetings. E. G. Keller has conducted a general store in the village for forty years.

The “forty years” in Prowell, is a typo; E. G. Keller had been there nearly fifty years in 1907. I also get the question; was the postal office in Pleasureville spelled “Springet” or “Springett?” Springet is the spelling that appears on envelope cancellations and all official government correspondence. The Springet post office existed in Pleasureville until November 30, 1908.

The following photo shows the buildings [w72] that housed the E. G. Keller store in Pleasureville. These buildings are now a private residence at 2543 North Sherman Street.

A core section of Pleasureville was listed on the National Register of Historic Places on February 18, 2000. The nominating application for the Pleasureville Historic District includes these comments about the E. G. Keller store; quoting from section 7, page 3:

Two frame 1-1/2 story buildings at 2543 North Sherman Street (TP# 9-85) date to c.1859 and are currently used as residences. One sits on the street with the second behind the first. Housing Emanuel G. Keller’s store from 1860 through the first decade of the 20th century, the front three-bay building has a rubble stone foundation, side-facing gable roof with asphalt shingles and scrolled barge board, 6-over-6 windows and a modern concrete full-width porch (Photo No. 9). Very similar to the former store, the rear building has a standing seam metal roof with open cornice and several replacement windows on its front elevation. E. G. Keller also owned the two-story dwelling to the east, and the rear dwelling many have been used as an accessory building to the store throughout the 19th century.