At the top of this illustration, using Shearer’s 1860 Map of York County, I’ve pointed out, and marked, ten 1860 buildings in the Pleasureville region within what is now Springettsbury Township. At the bottom of the above illustration is a 1937 aerial photo of the same region.

I’ll match these 1860 dwellings to the families resided in them; utilizing the 1860 United States Census. I’ll also examine John Cunningham’s residence [w59] in greater detail; he cleared much of his 104-acres in the area, where he also built three more dwellings.

Shearer’s 1860 Map of York County  contains the owner/occupant of most buildings; for example (w57) is J. Oaks. Additional information on J. Oaks can be found by consulting the 1860 Census of the United States; where one discovers this is John Oaks, a 50-year-old, millwright, with $1,200 in real estate holdings. 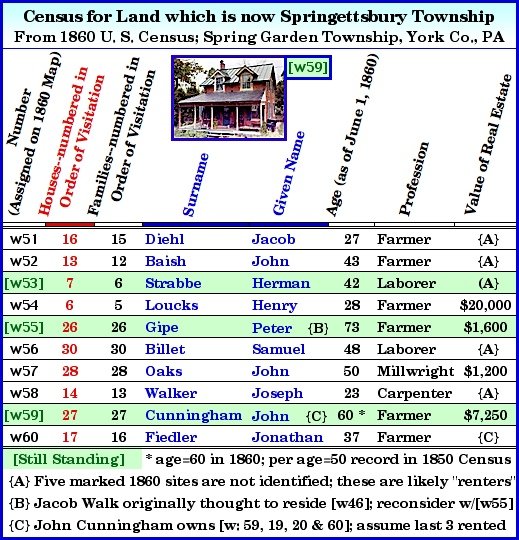 In the 1860 Census, house number 26 [w55 on the 1860 Map] is recorded as having two families residing therein; family number 26 is the family of Peter Gipe, and family number 25 is the family of Jacob Walker. Walker was originally thought to reside at [w46], per a previous post in this series; a correction will be made per this Census observation.

He came from his native State [Maryland] to York County {Pennsylvania] at the age of eighteen and settled near York in the present area of Springettsbury Township. He first secured employment with George Loucks, a prominent miller and distiller, and also assisted in the construction of the railroad from York to Wrightsville [completed in 1840].

Being active and enterprising, he turned his attention to farming. He first purchased a small property. By diligence and attentiveness to duty he became the owner of a farm containing 104 acres, two and a half miles northeast of York. When John Cunningham purchased this land most of it was uncultivated. By the assistance of his sons, he cleared the land and made it rich and productive, erected new farm buildings, made many other improvements, and pursued farming as his occupation the remainder of his life.

Shearer’s 1860 Map of York County show “J. Cunningham” identified on four dwellings, centering near the western end of Druck Valley Road. Two of these dwelling [w59] and [w60] are on the north side of Druck Valley Road, while dwellings [w19] and [w20] are on the south side of the road; their location placement on the map does allow all these dwellings to fit within a 104-acre footprint.

The 1860 Census listing for John Cunningham records all his children still living in his household; except for his eldest son William, a Master Carpenter, living at [w42] along North Sherman Street. Thus it is likely that three of John’s four dwellings were being rented out to tenants.

Which of the four dwellings was the John Cunningham residence?

In the 1880 United States Census, the widow Elizabeth Cunningham resides in the same dwelling as the family of her daughter Elizabeth; i.e. family of Henry and Elizabeth Schultz. John Cunningham died in 1866. His wife Elizabeth (Spangler) Cunningham lived until 1883.

Beach Nichols’ 1876 Atlas of York County provided the clue. The neighbors to Elizabeth Cunningham, per the 1880 Census are consistent with 1876 map neighbors per [w59] location. On the 1876 map, the dwelling at the [w59] location is marked “Mrs. Cunningham.” There is no dwelling at the [w60] location. Also on the 1876 map, the families of two of John’s sons reside in the dwellings on the south side of Druck Valley Road. Eli Cunningham resides in [w19] and David Cunningham resides in [w20]. In all likelihood, John Cunningham (1800-1866), with his wife and five children, lived in the following dwelling at least from 1860 and onward.