At the top of this illustration, I’ve pointed out, and marked, ten 1860 buildings in Hively’s Area within what is now Springettsbury Township. At the bottom of the above illustration is a 1937 aerial photo of the same region.

I’ve zoomed in on the 1937 aerial photo to provide better detail in locating the 1860 properties (w41) through (w50). If you are reading this on the Ydr.com site, click on this LINK for a Full View of the illustrations in this post on the original YorkBlog site; since the ydr.com site will occasionally cut off important details in the cropping of illustrations.

Shearer’s 1860 Map of York County contains the owner/occupant of most buildings; for example (w45) is B. Loucks. Additional information on B. Loucks can be found by consulting the 1860 Census of the United States; where one discovers this is Benjamin Loucks, a 36-year-old, laborer, with $800 in real estate holdings. 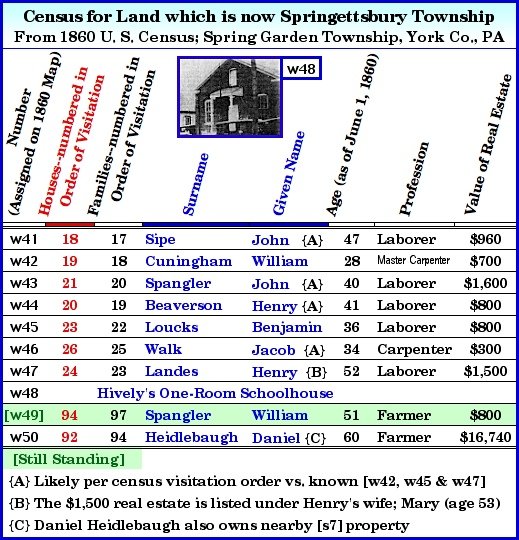 While buildings stand at several of the indicated locations, most of these structures appear to date to later than 1860. Only one of the mapped 1860 buildings likely still stands at this address:

The site of Hively’s One-Room Schoolhouse was recorded as “at the northern extremity of the premises and plantation of Samuel Hively;” per York County Deed Book 5E, Page 90. In this deed of February 13, 1853, it appears a private schoolhouse was already on the 50-feet by 66.5-feet lot granted to the Directors of the Common Schools of Spring Garden Township.

The school was undoubtedly named for Samuel Hively, who owned large acreage west of North Sherman Street. Hively’s was a public school in Spring Garden Township and then Springettsbury Township from 1853 until 1929.

In 1915, William C. Hively, and his wife Lizzie, donated a lot for a Chapel; to be used for the Hively Lutheran and Reformed Union Sunday School. This 1929 photo shows Hively’s Chapel (left side of photo) and Hively’s One-Room Schoolhouse (right side of photo) along North Sherman Street. Hively’s Park was located nearby. The surrounding area straddling North Sherman Street, just south of Pleasureville informally took the name Hivelytown or Hively’s for short.

With newer school buildings opening in the Pleasureville area, on March 30, 1929, the School Directors of Springettsbury Township sold Hively’s Schoolhouse to Hively’s Chapel. The photo provides a clue why Hively’s Chapel purchased the schoolhouse; it was torn down for more automobile parking. Today, the building, originally know as Hively’s Chapel still stands, with its side parking lot, on the southwest corner of North Sherman Street and Paradise Road.