At the top of this illustration, I’ve pointed out, and marked, six 1860 buildings in the North Hills Road Area within what is now Springettsbury Township. At the bottom of the above illustration is a 1938 aerial photo of the same region.

I’ve zoomed in on the 1938 aerial photo to provide better detail in locating the 1860 properties (s36) through (s41). If you are reading this on the Ydr.com site, click on this LINK for a Full View of the illustrations in this post on the original YorkBlog site; since the ydr.com site will occasionally cut off important details in the cropping of illustrations.

Shearer’s 1860 Map of York County contains the owner/occupant of most buildings; for example (s40) is J. William. Additional information on J. William can be found by consulting the 1860 Census of the United States; where one discovers this is John Williams, a 53-year-old, farmer, with $25,900 in real estate holdings. 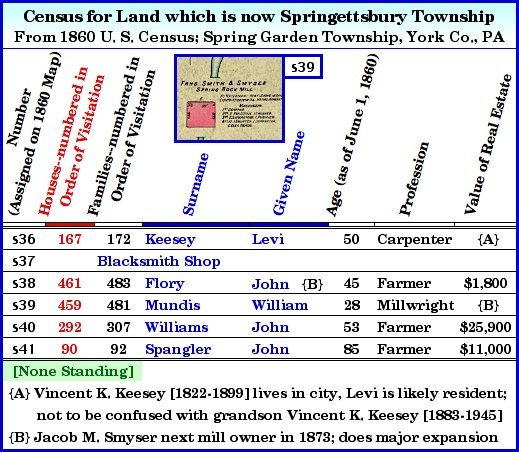 None of the 1860 buildings still stand. The Blacksmith Shop (s37), on the northwest corner of East Market Street and North Hills Road, moved by 1904, just across the street, to the southern side of Market Street, where it was operated for many years by Clayton Dietz, until it was torn down when I-83 was constructed in this area during the late 1950s. The Vincent K. Keesey home (s36) likewise was torn down when I-83 was constructed. The (s36) home was the country estate of York lawyer Vincent K. Keesey [1822-1899]; who is not to be confused with his grandson, Vincent K. Keesey [1883-1945], who eventually owned a home, a short distance to the east, at 1901 E. Market Street.

Since at least 1756, a mill, powered by the water of Mill Creek, was located along what is now North Hills Road, in the area behind where the Rutter’s Store is presently located. In Grant Voaden’s research on mills, housed within the collections of the York County Heritage Trust, this mill is identified as GV-137. Voaden documented the earliest mill at this site was a fulling mill.

A fulling mill is used to clean cloth (particularly wool) to eliminate oils, dirt, and other impurities, and make it thicker. At the time of the 1860 map, it appears the mill (s39) was still a relatively small fulling mill owned by John Flory (s38).

In 1873, twenty-eight year old Jacob M. Smyser, from West Manchester Township, purchases the mill property from John Flory. In the next eight years Mr. Smyser was responsible for a major expansion of this mill, into a substantially sized Grist Mill. Following those eight years, Jacob Smyser moved, became a banker and investor in a wide range of business interests, however he retained primary ownership of this mill until his death in 1911. A 1908 Sanborn Fire Insurance Map of York, PA, available online at Penn State Libraries, contains details of the buildings associated with Smyser’s Mill.

Photographic evidence can still be seen for the mill’s head race and tail race along the west side of North Hills Road within the 1938 aerial photo. Note that the 1908 Sanborn Map indicates North Hills Road was known as Smyser’s Mill Road at the beginning of the last Century. A portrait of Jacob M. Smyser appears in George Prowell’s 1907 History of York County, PA; opposite page 248 of Volume II. The following photo, from Ancestry.com, appears to be an original of the photo used by Prowell.

Besides Smyser’s Mill, the mill was also known as Spring Rock Mill. The mill building was three and one-half stories of brick construction. The nearby miller’s house was of stone construction. It is possible that the large stone barn, still standing opposite Rutter’s Store, was part of the mill expansion done by Jacob Smyser between 1873 and 1881; that possibility will be confirmed in a future post.

Carl L. Lafean owned the mill from 1918 to 1942; at which time industrial buildings were built along the west side of Smyser’s Mill Road. In 1942 this complex became the property of York Paper Manufacturing Company, and in 1953, the Industrial Litho Company. The construction of I-83 required the demolition of the mill and miller’s house. The industrial buildings adjacent to North Hills Road were demolished when the Rutter’s Store was constructed.