At the top of this illustration, I’ve pointed out, and marked, eight 1860 buildings in the Stony Brook region within what is now Springettsbury Township. At the bottom of this illustration is a 1937 aerial photo of the same region, showing the (e51) location of the ‘S.H.’; a School House.

The corresponding locations of the other seven buildings, (e52) through (e58), shown on the 1860 map, are noted on the following enlarged view of the 1937 aerial photo. Until 1912, the east side of Locust Grove Road, completely up to East Market Street, was all Hauser farmland. Two of the initial buildings built on the east side of Locust Grove Road were the Stony Brook Mennonite Church and the second, (1913-1952), Stony Brook One-Room Schoolhouse; I’ll have more about these buildings later in this post. 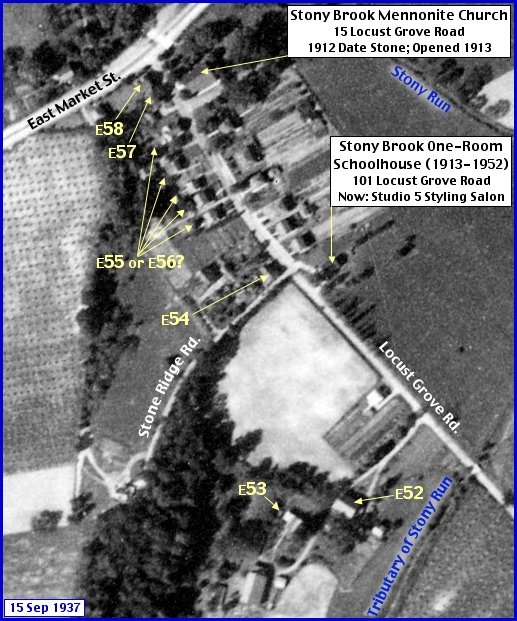 Shearer’s 1860 Map of York County contains the owner/occupant of most buildings; for example (e54) is J. Mellinger. Additional information on J. Mellinger can be found by consulting the 1860 Census of the United States; where one discovers this is Jacob Mellinger, a 40-year-old Farmer.

The results after consulting 1860 Spring Garden Township census records are shown below. Spring Garden Township records must be used because Springettsbury Township was formed from the northeast part of that township on April 20, 1891. The order of visitation, of the census taker, often provides assistance on who are neighbors and the tabulation of “value of real estate” separates the landowners from the renters or tenants: 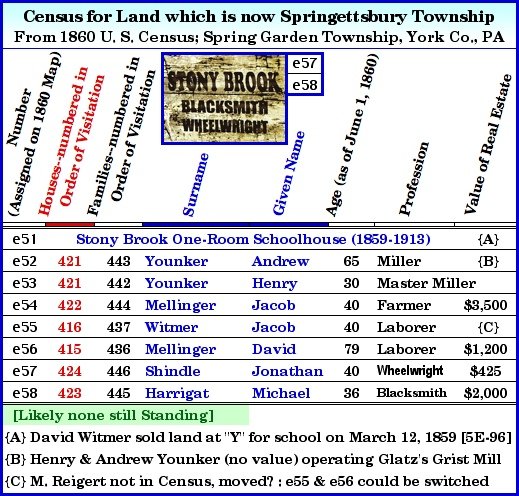 It is likely that none of these 1860 buildings still stand; however parts of the (e55 or e56) buildings, may still stand within the indicated more recent buildings along west side of Locust Grove Road. If anyone believes this may be the case, post a comment to contact me.

A Mennonite Congregation, established in 1803 and originally situated along Stone Ridge Road, was the first to build in the Hauser Farm fields along the east side of Locust Grove Road in Stony Brook. Construction began in 1912 for the church on the southeast corner of East Market Street and Locust Grove Road. The first services in that church building were conducted in 1913.

Further details about the Grist Mill, at the (e52) location, can be found in the following posts:

The building at the (e51) location, noted as ‘S.H.’ on the 1860 map, is the first Stony Brook One-Room Schoolhouse. A small lot, on which this schoolhouse was built, came from David Witmer on March 12, 1859 (Deed Book 5E, page 96). The school was built that summer and the first classes were held in the fall of 1859.

The 1860 map is close, but not precisely correct in locating the schoolhouse. The 1859 Deed and future maps have the school positioned tightly within the “Y” formed between Old Orchard Road and Locust Grove Road. Per the deed, from the intersection of these two roads, the school property extends 182 feet along the road heading more easterly (Old Orchard Road) and 153 feet along the road heading more southerly (Locust Grove Road.)

The story of the (e51) building, after it was no longer used as a schoolhouse, is told in Springettsbury Township Centennial, 1891-1991, page 51:

Later John A. Witmer built the frame house at the corner of Old Orchard and Locust Grove Roads. A schoolhouse, named Stony Brook, was on this land. It was torn down and the current residence was built about 1920 from much good timber saved from a business in the area.

My goal is to get community involvement. If anyone has a story associated with past owners of these properties, please post a comment.