At the top of this illustration, I’ve pointed out, and marked, ten 1860 buildings in the Stone Ridge Road region within what is now Springettsbury Township. At the bottom of this illustration is a 1937 aerial photo of the same region. I will show an enlarged view of the white dashed area, with corresponding building markings, later in this post.

In the lower left of the illustration, I’ve pointed out and noted, in 1860, it appears surveyor D. J. Lake mapped a tree-line/drainage ditch, instead of the main branch of the creek. I’ve confirmed this suspicion by examining the 1908 topographic map of the same region; which I’ve included in the insert.

This is important, because if one compares this area on the 1860 map with later maps, it looks like D. J. Lake placed the (e46 to e50) buildings in correct relationship with one another; however he incorrectly located them relative to the drainage ditch vicinity instead of the vicinity of the actual creek. This incorrect placement on the 1860 map is confirmed by comparing the relative location of two standing landmarks, the King James Bible Church (e41) versus the Schultz House (e47); where the aerial photo and topographic map are in agreement.

My suspicion is that surveyor D. J. Lake sighted and mapped what he thought was the main branch of the creek while at a residence west of that area. Possibly a few days later he approached the area from the other direction, to map the locations of the Schultz House (e47) and surrounding buildings; thinking they straddled the same creek he had incorrectly surveyed a few days earlier.

When the map was made from the survey notes, the cluster of buildings ended up correctly placed relative to one another, however not on the actual creek.   This is to take nothing away from the overall 1860 map. I am continually amazed at D. J. Lake’s accurate placement of virtually all roads on the map; considering the following illustration depicts him surveying:

I’ve depicted D. J. Lake surveying the 1860 Map of York County, Pennsylvania, in this illustration. D. J. Lake “went around pushing a wheelbarrow in front of him, and in this barrow he carried his instruments. He did not talk to any one except to ask at every place the one question, ‘who lives here?’”

Can you imagine someone pushing a wheelbarrow along every road that existed throughout York County? Country folk thought he was crazy. D. J. Lake likely counted the revolutions of the wheel to measure distance, while noting direction with a compass.

The map surveyed by Lake and published by W. O. Shearer in Philadelphia is remarkably accurate; even down to the proper placement of the principal residence(s) within each property. Recollections of a person who witnessed this surveying and discussed it with D. J. Lake can be found in the post: Shearer’s 1860 Map of York County.

The corresponding locations of the ten buildings, noted on the 1860 map at the beginning of this post, are noted on the following enlarged section of the 1937 aerial photo. Within this enlargement, I’ve placed the location markers based upon the best, combined evidence of 1860, 1876 and 1908 maps. The 1876 map is Beach Nichols 1876 Atlas of York County, PA. 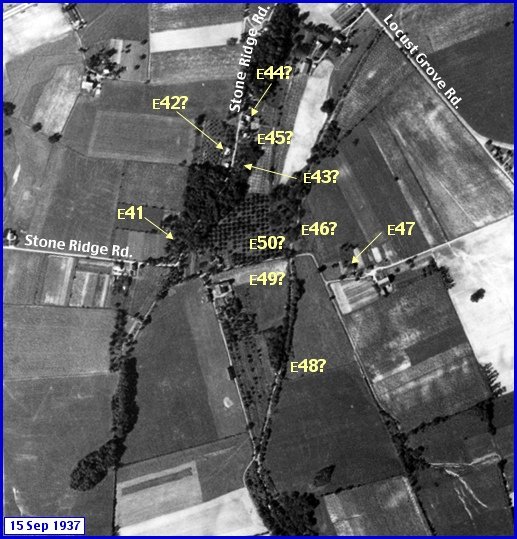 Shearer’s 1860 Map of York County contains the owner/occupant of most buildings; for example (e47) is Mrs. Forrey. Additional information on Mrs. Forrey can be found by consulting the 1860 Census of the United States; where one discovers this is Martha Forry, a 75-year-old Widow Farmer.

The results after consulting 1860 Spring Garden Township census records are shown below. Spring Garden Township records must be used because Springettsbury Township was formed from the northeast part of that township on April 20, 1891. The order of visitation, of the census taker, often provides assistance on who are neighbors and the tabulation of “value of real estate” separates the landowners from the renters or tenants: 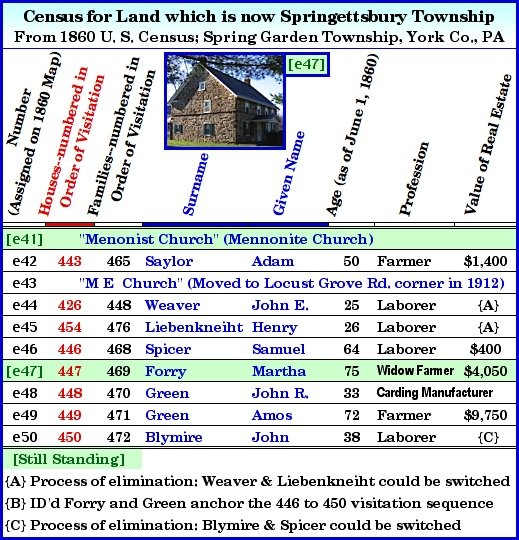 Two of these 1860 buildings still stand at these addresses: 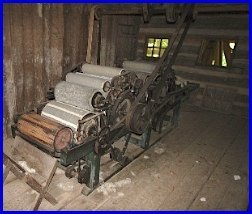 Carding is the profession of John R. Green; living at residence (e48). This photo, from the Wikimedia free media repository, of a 19th Century carding machine shows the manufacturing operation that might have existed at his place.

Carding is a mechanical process that disentangles, cleans and intermixes fibers, such as wool, plant fibers, etc., to produce a continuous web. To power the machine, John could have utilized a water wheel; powered from the creek immediately to the west of his place.

On Beach Nichols’ 1876 map, the ‘M E Church’ (e43) is directly across Stone Ridge Road from the small burial ground. This small burial ground is now on the southwest corner of Eastern Boulevard and Stone Ridge Road, therefore the 1876 map placement of the ‘M E Church’ makes sense. If you look at the 1860 map, D. J. Lake incorrectly places that church closer to the curve in Stone Ridge Road; again, I think D. J. Lake likely sighted and recorded building locations relative to one another in this area and his creek error rippled to incorrect placement of nearby buildings.

That small burial ground on the southwest corner of Eastern Boulevard and Stone Ridge Road is known as the Evangelical Burial Ground; in 1932, 24 gravestones were still standing. The congregation (established in 1803) of the M E Church moved to a new building on the southeast corner of East Market Street and Locust Grove Road during 1912.

Part of the (e42 to e44) buildings, may still stand within more recent buildings along Stone Ridge Road. Deed and early family history research concerning the history of all properties is ongoing. My goal is to get community involvement. If anyone has a story associated with past owners of these properties, please post a comment.