The Country Estate of Elias Ebert on Eberts Lane

At the top of this illustration, I’ve pointed out, and marked, ten 1860 buildings in the Western Area within what is now Springettsbury Township. At the bottom of the above illustration is a 1937 aerial photo of the same region, were I’ve located the 1860 properties (w31) through (w35). I’ve zoomed in on the 1937 aerial photo to provide better detail in locating the 1860 properties (w36) through (w40).

Shearer’s 1860 Map of York County contains the owner/occupant of most buildings; for example (w39) is E. Ebert. Additional information on E. Ebert can be found by consulting the 1860 Census of the United States; where one discovers this is Elias Ebert, a 30-year-old, farmer, with $21,000 in real estate holdings. 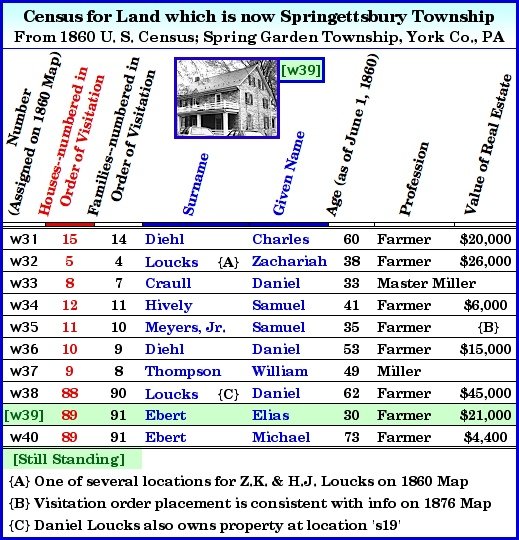 One of these 1860 buildings still stands at the following address:

The Country Estate of Elias Ebert on Eberts Lane

Elias Ebert (1829-1885) has a write-up on page 188 of the Biographical Sketches within John Gibson’s 1886 History of York County, PA. Some of his descendants provided additional information on Ancestry.com; including the following photo of Elias Ebert. A combined biographical sketch follows using information from both those sources. 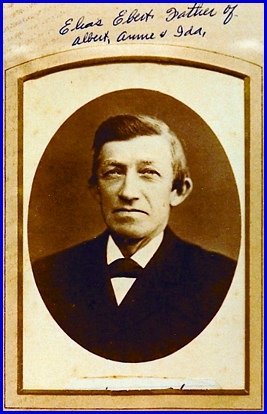 Elias Ebert was born October 25, 1829, at the Spring Garden Township farm of his parents Michael and Lydia (Diehl) Ebert. Elias’ father, Col. Michael Ebert, was a farmer in West Manchester Township, and a colonel in the war of 1812, which title he always retained. He came to Spring Garden Township in 1829, and located on the farm now owned and occupied by his son Elias Ebert.

Elias Ebert married Susan Bott in 1853. They had four children: Albert (1854-1933), Jacob (1856-1856), Annie (1857-1930) and Ida (1860-1920). Elias was a prominent agriculturist; he farmed, kept a dairy, and was a manager of the York County Agricultural Society. Mr. Ebert was also president of the Spring Garden Mutual Fire Insurance Company. Elias Ebert created a direct lane from the City of York to his country estate; it is still known as Eberts Lane.

Elias and Susan Ebert were members of Mt. Zion Lutheran Church. Elias died in 1885 and Susan died in 1901. The next owner of the Ebert farm was Edwin Myers, he named the estate “The Hedges.”

The following 1989 photo of the (w39) building at 1103 Eberts Lane is from the collections of the Springettsbury Township Historic Preservation Committee. This photo shows the north side and west end of the house; facing Eberts Lane.

The oldest part of the house, nearest Eberts Lane, is a 2-1/2 story stone dwelling with slate roof. The windows have shallow stone arches. Interior brick chimneys are at both ends of the original stone dwelling.   It is estimated that the brick additions, to the east end of the house, were added as two parts; approximately during the 1880s.

Loucks Mill (w33) and Diehl’s Mill (w37) will be explored, in greater detail, in future posts. A question I’ve often heard concerns individuals who own Grist Mills; people will ask “I know he owned a Grist Mill, then why does the Census list him as a Farmer, as opposed to a Miller?” This question is more prevalent in the case of larger Grist Mills. The 1860 Census listing provides two examples why this occurs.